The Heavenly Sound of Rosetta Tharpe

“Up Above My Head” is a classic. And this week’s Gospel Jubilee a must-see event. 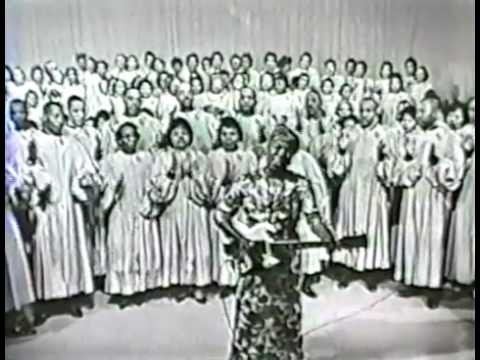 Believers, non-believers and all the bet hedgers in between would have to admit that Sister Rosetta Tharpe singing and playing “Up Above My Head” is some kind of heaven on earth. There is almost no earthly explanation for the fire, the energy this human volcano unleashes. It’s a shame it took so long for her to gain her rightful place in the Rock and Roll Hall of Fame, because she was undoubtedly one of its inventors. But she’s finally in and some balance has been restored to the universe.

When you watch her blistering solo in the middle of this barnburner, know that she was doing things like this long before Chuck Berry or Jimi Hendrix. That’s one of the reasons it’s not a stretch at all to say she was one of the important inventors of Rock and Roll. Add these other gospel singers who crossed over to the pop side: Ray Charles, Sam Cooke, Aretha Franklin and even Dionne Warwicke and a pattern starts to emerge. The molten core of the planet Rock and Roll comes from Gospel and Blues. Don’t dare remove it or we will enter a twilight zone where the stars are all Pat or Debbie Boone with a side of Osmonds. I exaggerate, but only a little.

This brings me to my yearly pitch for you to come out and experience the deep  beauty of this American art form. Milwaukee, like a lot of northern cities, benefitted from the migration of African Americans in the middle of the last century. Sadly, as we reap the rewards of the culture they brought with them, they in turn can now say they live in one of the worst states in the country for black people. The terrible pressure segregation and poverty put on countless households in our town is real. Children are traumatized, young men are incarcerated at a much higher rate. It’s a familiar image: drugs, violence, poor health and despair. It’s a wonder they can sing and a miracle when they do..

Two very important local groups try to make things better. In the black churches, spirits are attend to, baskets passed to help the needy and hand clapping (on two and four, mind you) is encouraged. I’m on the board of Progressive Community Health Centers, a fine organization that provides essential health services no matter what the patient can pay. My modest contribution was to try to raise funds with gospel music. This event’s organization succeeds because I know a few strong, intelligent women who get it done. So far we have raised over one hundred thousand dollars

We just had our fifth and final Gospel Brunch of the year at Collectivo, Despite the heavy snow people turned out and saw what was possibly the best one yet. The music was non-stop and the musicians to a man — along with a young woman named Cherice Love, who is both a great singer and a solid drummer — were all fantastic. Take Malcolm Ramsey, who just turned 27 last week. His main instrument is keyboards. He plays the fairly complex Gospel harmonies with his right hand while his left flies around executing the driving bass lines that provide the unstoppable momentum. He does all that with a big smile on his face that betrays not one iota of worry while playing bass at a level that could get him hired anywhere in town. He’s also a drummer, and though I’ve never seen him do that, I suspect he’s a good one.

I’m not kidding when I say the Gospel churches here and across America are the best music schools in the country. The only thing that isn’t taught there is how to read music. This may present a problem for those looking beyond church for music careers or, like Milwaukee native Shonn Hinton, who is musical director for Mary J. Blige, but talent and ambition can win the day.

It’s a truly impressive American art form and your best chance to catch some of Milwaukee’s best Gospel groups in action is coming up Friday, March 8th at the Marcus Performing Art Center. It’s the annual Gospel Jubilee. Tickets are a modest $25 and available from the box office, but this one might sell out, so you better act fast.

A note to all those who avoid Gospel music for fear of being evangelized: Don’t worry, it just won’t happen. The musicians and preachers let the music speak for itself. Of course they thank God from the stage. That’s one of the beautiful things about it — the gratitude. You might be doing the same when you leave, or wishing you had someone to thank. Either way no one will be forcing you to join a church. I’ve been around these groups close to 30 years and not once have they asked about my religious status.

So we hope to see you there. It will be a great show. The Gospel Jubilee gets better every year.