Does the Manufacturing Tax Credit Work?

Gov. Evers and Republicans differ on value of the Manufacturing and Agriculture Tax Credit. Who's right? 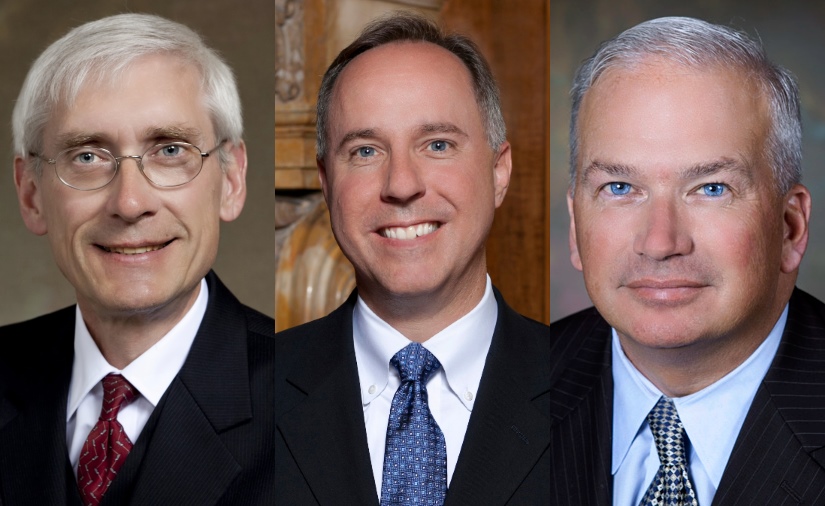 When Governor Evers vetoed the Republican version of a middle-class tax cut, the response from the Republican legislative leadership followed predictable lines. In its veto article, the Journal Sentinel quoted Senate Majority Leader Scott Fitzgerald, R-Juneau, as saying, “Let me be clear with the governor: I will not support raising taxes on our state’s job creators.”

According to the same article, Assembly Speaker Robin Vos, R-Rochester, said he “expected more from someone whose first speech included a promise to work together.” Vos added, “Unfortunately, Governor Evers is starting to show his true colors. Only a Madison liberal would believe the only way to cut taxes is to raise taxes on others.”

The Manufacturing and Agriculture Tax Credit was passed shortly after Scott Walker became governor and was phased in over the next few years until its reached maximum level in 2016. Today, businesses that can claim to be engaged in manufacturing or agriculture can claim a tax credit equal to 7.5% of such “eligible qualified production activities income.”

Wisconsin offers a similar deal to qualifying pass-through businesses, where the owners report the business’s income on their personal tax returns. Wisconsin’s top marginal rate, for those making over $336,200 (married couples), is 7.9%, leaving the same effective tax rate of 0.4%.

For incomes between $30,540 and $336,200 the marginal income tax rate is 6.27%, smaller than the tax credit. Thus, the owners of a business with very strong profits could end up paying no Wisconsin income tax.

As the next graph shows, based on a memo from the Legislative Fiscal Bureau, the cost of the tax credit has steadily risen since its enactment, reaching a projected total of $338 million in the current year. It is likely to continue to rise in future years as more firms learn how to define themselves as manufacturers. For example, a distributor might add a last-minute processing step. 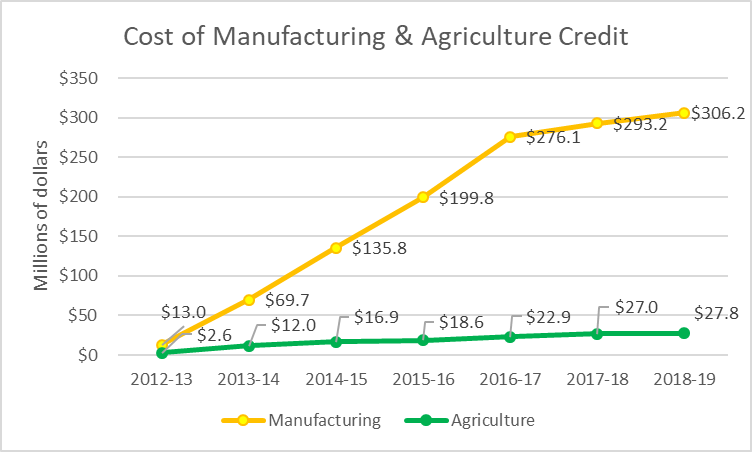 The next graph, based upon an October 25, 2018, Legislative Fiscal Bureau memo, shows who is projected to receive the credit. As income goes up, so does the value of the credit. Thus, the credit can be viewed as a Wisconsin taxpayer subsidy to a subset of very wealthy people. 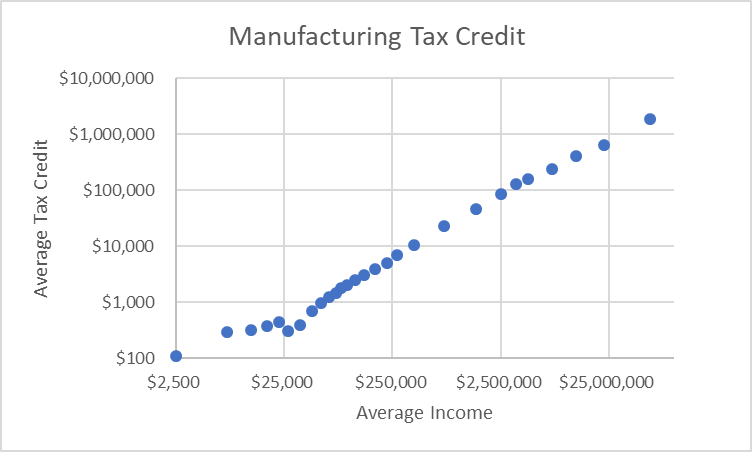 The Manufacturing and Agriculture Tax Credit turns these wealthy people into free riders. They continue to benefit from the state services funded by other taxpayers, while paying little towards their cost.

In his criticism of the veto, Fitzgerald strikes the familiar Republican rhetorical trick of referring to those wealthy people as “job creators.” In exchange for getting a free ride on state services, did they indeed create manufacturing jobs?

At some level, this is a question that is impossible to answer precisely. For perfect clarity we should rerun the last eight years with everything the same except for the absence of the tax credit. Unfortunately we don’t have that ability.

However, Wisconsin is surrounded by states that share many of the same economic traits as Wisconsin, including historically dominant manufacturing and agriculture sectors. Perhaps these states could be used to predict how Wisconsin’s manufacturing jobs would have performed without the tax credit.

The underlying theory for this model is that Wisconsin and the other states are reacting to a similar set of stimuli in the national and global economies. At least between 1990 and 2010, this theory is consistent with the ability of the model to track the actual Wisconsin jobs numbers. 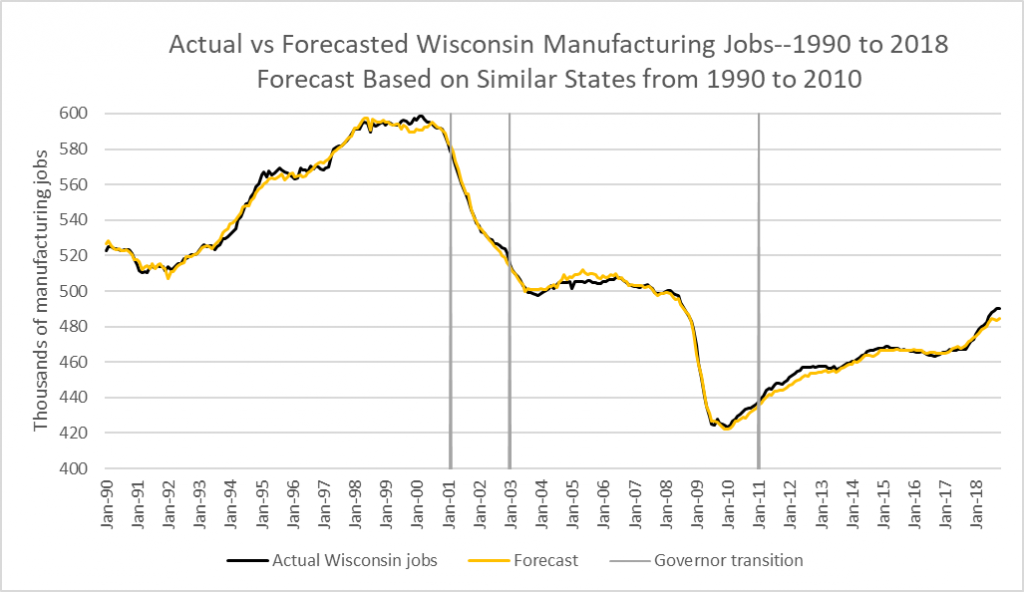 The model derived using the period before 2011 was then applied to the period between December of 2010 and December 2018, as shown in the graph below. This graph also plots the tax credit (shown in green and using the right-hand scale). If the tax credit did have a notable effect on jobs, one would expect the actual Wisconsin manufacturing jobs to substantially exceed the forecasted numbers. After all, the forecast was based on the relationship of Wisconsin jobs to those of its neighbors before the tax credit was enacted. 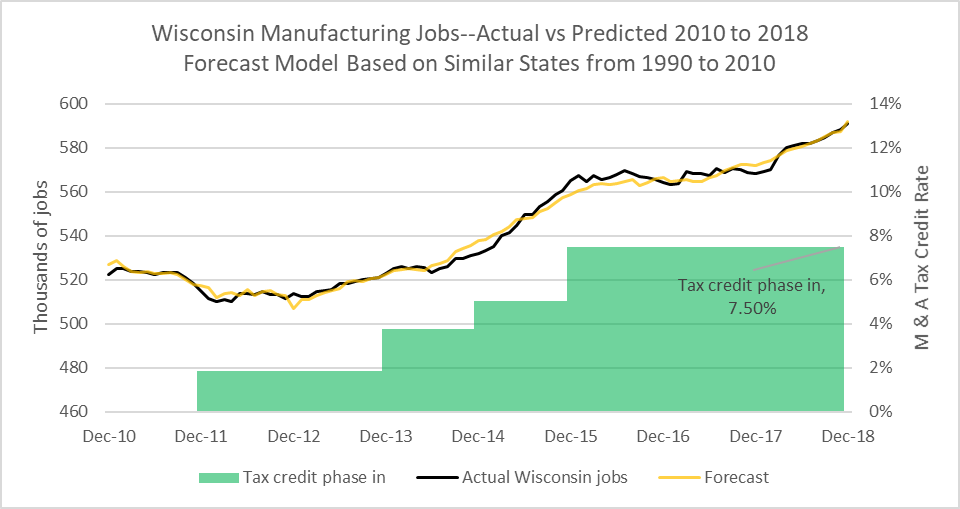 Wisconsin Manufacturing Jobs–Actual vs Predicted 2010 to 2018. Forecast Model Based on Similar States from 1990 to 2010

Why hasn’t the Manufacturing and Agriculture Tax Credit had more of an effect? One likely cause is that state income taxes are a minor factor in determining whether a particular investment makes sense or not. By definition, an income tax is owed only if the enterprise is profitable.

Some years ago, the Kauffman Foundation found that startups are the only net job creators. With older firms, it found, those shedding employees cancelled firms adding jobs. Yet startups, in particular, are likely to put the ability to pay income taxes near the bottom of their worries. Profits—and income taxes—come with success.

In my view, there are two problems with Vos’s “job creator” myth. It can be regarded as a cynical ploy to justify rewarding wealthy people who contribute to campaigns and expect to be rewarded. In 1776, Adam Smith commented: “It is not very unreasonable that the rich should contribute to the public expense, not only in proportion to their revenue, but something more than in that proportion.” Calling the beneficiaries of legislation “job creators” serves to obscure what is really going on.

One thought on “Data Wonk: Does the Manufacturing Tax Credit Work?”