The Not So Great Lakes

New York artist and environmental activist Alexis Rockman’s latest exhibit acknowledges the breathtaking beauty of the five Great Lakes ecosystems, while commenting on how factors like climate change, mass agriculture and industry have affected, and continue to affect, these vital natural resources.

Organized by Michigan’s Grand Rapids Art Museum, “The Great Lakes Cycle” will be on display through May 19 at Marquette University’s Haggerty Museum of Art. The exhibit features five large-scale (6 x 12-foot) oil and alkyd paintings, more than two dozen field drawings, created with natural materials including soil, sand and leaves, and six watercolor and acrylic paintings.

The exhibit “is mostly about the majesty of nature, and the impact we are having on it,” said Susan Longhenry, Haggerty director. Milwaukee, which is fortunate enough to be located on the picturesque Lake Michigan, is a city increasingly known for its water management and water quality technologies.

Rockman, who was born in New York City in 1962, has had an interest in nature and the environment since childhood, watching nature documentaries, frequently visiting the city’s Museum of Natural History, and drawing animals from books.

The Great Lakes—Michigan, Superior, Huron, Erie, and Ontario—contain more than 20 percent of the world’s fresh water and are home to a staggering number of flora and fauna. With laminated cards listing plant and animal species portrayed in each oil painting, “The Great Lakes Cycle” is as much a lesson in natural history as it is a collection of stunning works of art, and showcases Rockman’s extensive knowledge of nature.

Rockman’s works explore how the lakes have changed over more than 10,000 years, largely due to human and industrial activity. “Cascade” chronicles the lakes’ history, from serenity to tragedy to what seems like irreparable damage. To the left of the painting, several moose swim, mallards fly through the air and a waterfall cascades, while on the right, a ship belches smoke near a river of what appears to be toxic waste and burning logs float on the water. Below the waterline fish and a shark swim by a broken lifeboat (or canoe), wire fencing and car tires.

Rockman’s use of detail in works like “Cascade,” from the scales on the fishes to the wings of mallard ducks to billowing smoke clouds of distant freighters, is stellar. His vivid colors of nature, icy whites, tranquil greens, and many shades of blue, contrast with the sickly yellows, grays, and oranges associated with chemicals, pollutants and industry.

Rockman explores how invasive species and pollutants can significantly disrupt and alter a freshwater ecosystem.

In his watercolor “Chimera” (2017),  for example, a series of brightly-colored fish and crustaceans appear to be cannibalizing one another, perhaps to represent how native species can be “swallowed up” or driven out by invasive ones. An oil painting, “Forces of Change” (2017), illustrates a mass of tentacles, symbolizing harmful bacteria that have upset the ecological balance, either a consequence of pollution or invasive species, while his watercolor and acrylic work, “Drop of Water”. magnifies several brilliantly-colored microbes found in a single miniscule drop of water.

Rockman also examines how large-scale farming has affected great lakes habitats, particularly in 2015’s “Watershed.” A jewel-colored ear of corn and a mutated chicken mark the results of genetic modification, while a drone flies overhead. There are no human figures pictured. Harmful fertilizers contaminate the once-pristine blue water, turning it a pale green.

The artist’s monochromatic field drawings of plants and animals, among them a raccoon, tree frog, double crested cormorant, wood duck, and river otter, bring to mind vintage natural history textbooks. The drawings, created from pigments made up of sand, soil and leaves from Great Lakes areas (including Wisconsin’s Presque Isle) are earthly colors—olive green, reddish brown, and charcoal gray. By using natural materials, Rockman is truly preserving nature through his art.

Two watercolors, “Upper Peninsula” and “Ice Fishing,” embrace quiet contemplation. A moose sits placidly in a body of water, munching leaves. A lone fisherman casts his rod on a frozen lake, illuminated by yellow-greenish lights while a shark and a handful of smaller fish appear preserved below the surface. 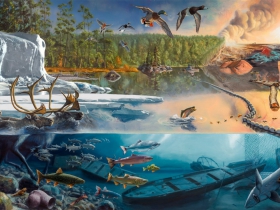 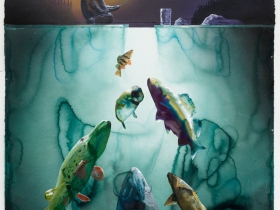 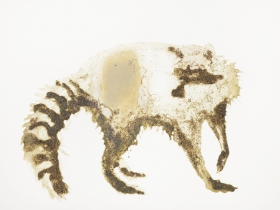 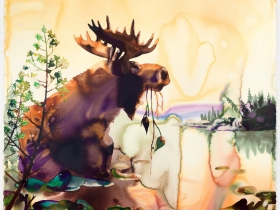 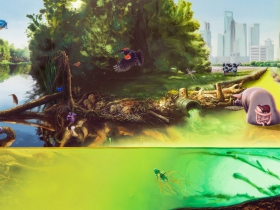