"We’re not building a supply chain, we’re curating an ecosystem.”

By Corri Hess, Wisconsin Public Radio - Feb 22nd, 2019 11:04 am
Get a daily rundown of the top stories on Urban Milwaukee 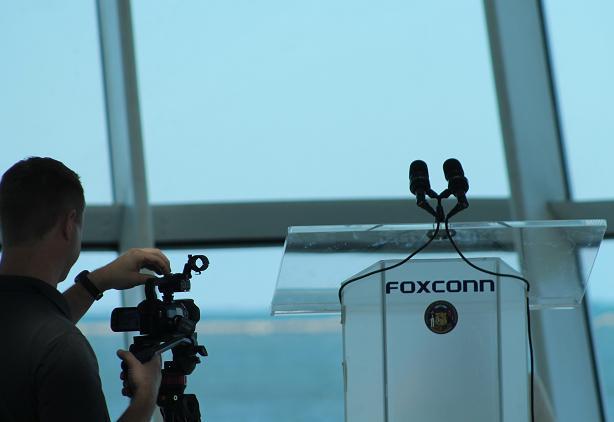 A Foxconn Technology Group executive said the work the tech manufacturing giant is doing in Wisconsin has never been done anywhere else in the world.

He said Foxconn’s plans to build a $10 billion LCD panel manufacturing complex in Racine County has brought some challenges because of its uniqueness.

“It’s kind of like we are building the airplane while we are flying, and we are redesigning it,” Mitchell said.

In late January, conflicting reports emerged about Foxconn’s future in Wisconsin and whether the company would move forward with its original plan to build a manufacturing plant in the state.

Foxconn said it’s committed to constructing a so-called Gen 6 fabrication facility in Mount Pleasant and creating 13,000 jobs in the state.

Mitchell did not address the facility or job creation. During his address he spoke about “curating an ecosystem.”

“We’re not building a supply chain, we’re curating an ecosystem,” Mitchell said. “Basically, we’re working together with different people to help us get to where we need to go by borrowing their expertise.”

Mitchell, who said he was part of the site selection team for Wisconsin, said he has met with close to 500 companies in the state over the last 18 months.

“The one thing I have observed over the last year-and-a-half, for most of these folks, the challenge has been, that they are afraid to do something different,” Mitchell said. “We all have a comfort zone we live in.”

While meeting with members of the media after his speech, Mitchell said Sharp televisions are currently being manufactured at a leased facility in Mount Pleasant. Sharp is owned by Foxconn.

“We’re excited about the new building that is coming up and all that it is going to hold,” Mitchell said.

Mitchell did not have specifics on the timeline of when the new construction would be complete, how many televisions were currently being manufactured or where they were being sold.

In previous years, former GOP Gov. Scott Walker received a standing ovation at the Manufacturing Matters! conference, but the greeting for the new Democratic governor was lukewarm.

On Wednesday, Evers vetoed the first bill sent to his desk by the Republican-controlled state Legislature. The GOP-backed proposal would have cut taxes on middle-income earners in Wisconsin by using unused state funds rolled over from the current budget cycle. The plan wouldn’t have a funding source beyond the next two years.

Evers and Democratic lawmakers back a different plan. Their proposal would also cut income taxes for middle-income earners, but it would be funded by raising taxes on some manufacturers.

Evers did not address the manufacturing tax when speaking to the group of manufacturers on Thursday. Instead, he touted fully funding education as a way to make the workforce stronger.

“Workforce development and retention has always been and always will be about having a good education system,” Evers said. “We need to fully fund our public schools.”

Foxconn Executive Says Wisconsin Project Unlike Anything Happening In The World was originally published by Wisconsin Public Radio.