The Deer, The Trees, The Wonder 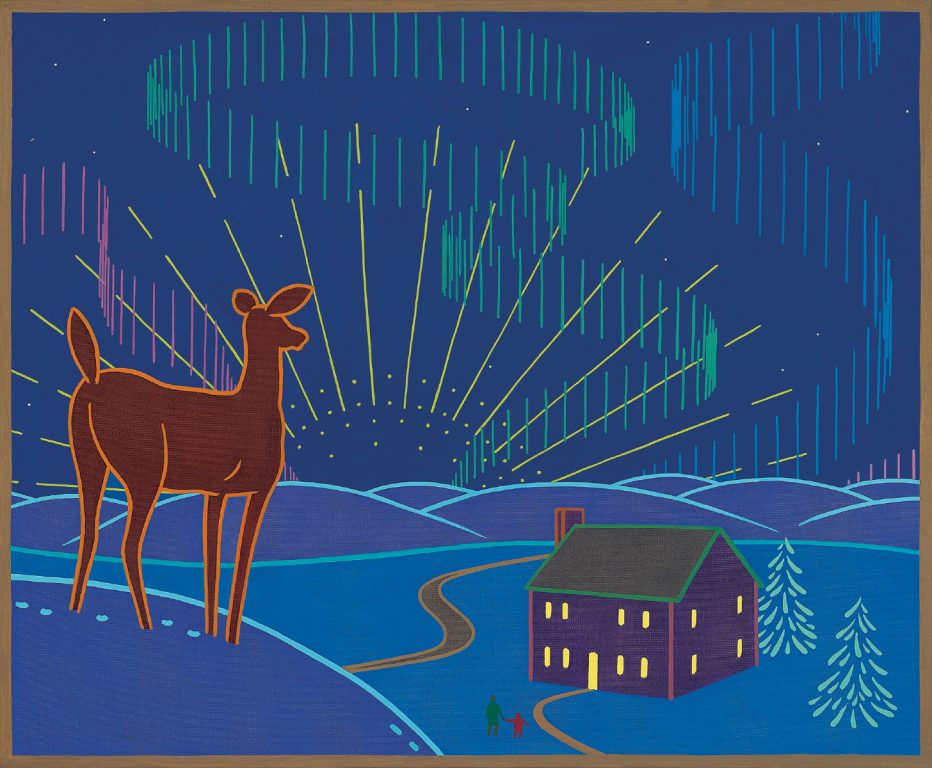 With their bold outlines, bright colors, and simple shapes, the paintings of Charles Munch look cartoon-like. But the Wisconsin artist’s messages of environmental conservation and man’s often contentious relationship with nature are quite important.

Between the Lines, now on view at the Museum of Wisconsin Art (MOWA) through March 10, showcases 30 of Munch’s works from the early 1980s to present day. All paintings are oil on canvas, save for two life-size cutouts at the exhibit’s entrance, 1992’s “Shoe Lacer,” a female hiker lacing up shoes, and “Art Man,” a male figure standing confidently in a yellow and red jumpsuit (a possible play on a superhero name?), both oil on plywood.

Munch’s paintings in this exhibit, entitled “Between the Lines,” mark a drastic departure from the realism of the artist’s early works, inspired by Italian Renaissance painter Giovanni Bellini and Baroque artist Caravaggio. It took Munch another decade to hone his signature style, and museum visitors can witness its evolution in the exhibit, where softer, yet thicker, lines of 1980s paintings like “Between the Trees,” “Seeking a Way,” and “Blood Rain” give way to the sharper, clearly-defined outlines of his later works.

The artist utilizes a bold color palette, a plethora of cobalt blues, red-oranges, kelly greens, rich browns, and sunny yellows in his paintings, reminiscent of graphic arts and comic books, which give his vibrant paintings a dramatic effect.

“Colors enthrall me wherever I encounter them,” Munch is quoted as saying.

“He’s a master of color. His color choices are just remarkable,” noted Graeme Reid, MOWA director of exhibitions and collections.

Munch, 72, grew up in Webster Groves, Missouri and attended Portland’s Reed College. In the 1970s, after spending time in New York and moving to Sturgeon Bay to start a painting restoration business, Munch and his wife, Jane Furchgott, purchased a home on more than 200 acres of land in Lone Rock, Wisconsin, where they continue to reside.

Rural solitude seems to have a profound impact on the artist’s paintings. Munch’s reverence for nature is particularly evident in paintings like “Hush!” (2003), “Sanctuary” (1994), and “Family Vigil” (2018), all three of which highlight human figures living in harmony with plants and animals, including cougars, deer, black bears, and raccoons. Many works, among them ‘On A Limb’ (2001), ‘Black Bear Falls’ (2012) and ‘Family Vigil’ incorporate nude male and female figures, reminding viewers that despite advances in civilization, humans are still biologically mammals.

However, the artist does not shy away from conflict in his works, or fail to highlight nature’s indifference towards humans and animals. A group of deer walk through a cemetery, oblivious to its solemnity, in “Two World II” (2007).

Fire, simultaneously representing destruction, rebirth, and warmth, is a recurring motif in Munch’s paintings. “Lights” (2005), for example, portrays a deer, dwarfing the tiny human figures below, observing a burning home from on top of a hill surrounded by aurora borealis lights. In 2005’s “Silent Night,” another home burns amidst the tranquility of the countryside. “Resurrection I” (1993) features two figures, dressed in brightly-colored clothing, sleeping around a campfire, its flames threatening to set a line of trees on fire. 1992’s “Fire on the Mountain,” which calls to mind California’s deadly wildfires, depicts a mountaintop, set aflame by fire and large lightning bolts, and several animals looking on, while a shirtless male figure, hands clenched, runs towards the destruction.

The element is also aesthetically pleasing. “Fire appeals to Munch for its color, graphic possibilities, and sense of movement,” Reid wrote in his essay on the show.

Several works explore ethical considerations of hunting and land development. 1991’s “Phantom Buck” depicts a leaping albino deer in front of two hunters with rifles raised, while two figures on opposite sides of the buck are pictured in a prayer position. 2003’s “Boundary Issues” features a fully-clothed male figure standing nose to nose with a buck on its hind legs, which seems to be defending a somewhat barren landscape. A nude male figure in a bridge yoga pose is painted behind the clothed man, perhaps a representation of our primitive ancestors.

The scenes of conflict between humans and nature contrast with the serenity portrayed in Munch’s recent works: “The Point I” (2013), “Spring Push-Off” (2015), “Northern Summer” (2016) “Bear Country” (2017), and “Wisconsin River Trip” (2018). In these, animals walk placidly through clearings and human figures kayak and sit on logs, soaking up the sun. The contemplative mood of Munch’s later works also suggest the artist taking a more relaxed approach to life as he ages.

In his essay, Reid quotes Henry David Thoreau that “We can never have enough of nature.” With “Between the Lines,” Munch emphasizes that nature can be inviting, wondrous and endlessly fascinating, or challenging and merciless, but above all, it must be respected.

Between the Lines Gallery 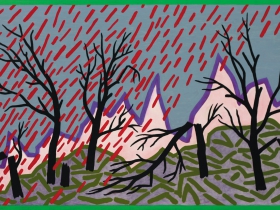 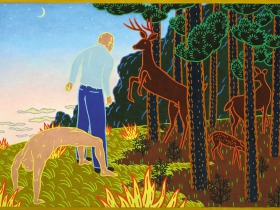 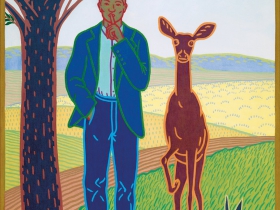 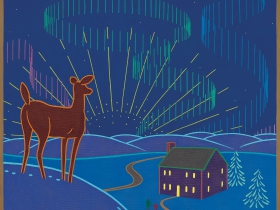 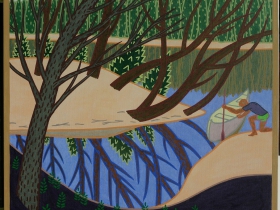 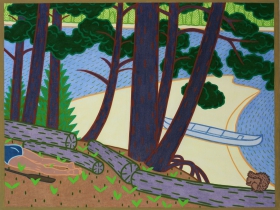 “Between the Lines,” through March 10 at the Museum of Wisconsin Art, 205 Veterans Ave., West Bend, WI.