The Tangled Roots of Racism

Next Act’s “Blood at the Root” hits hard, but lacks subtlety and shading. 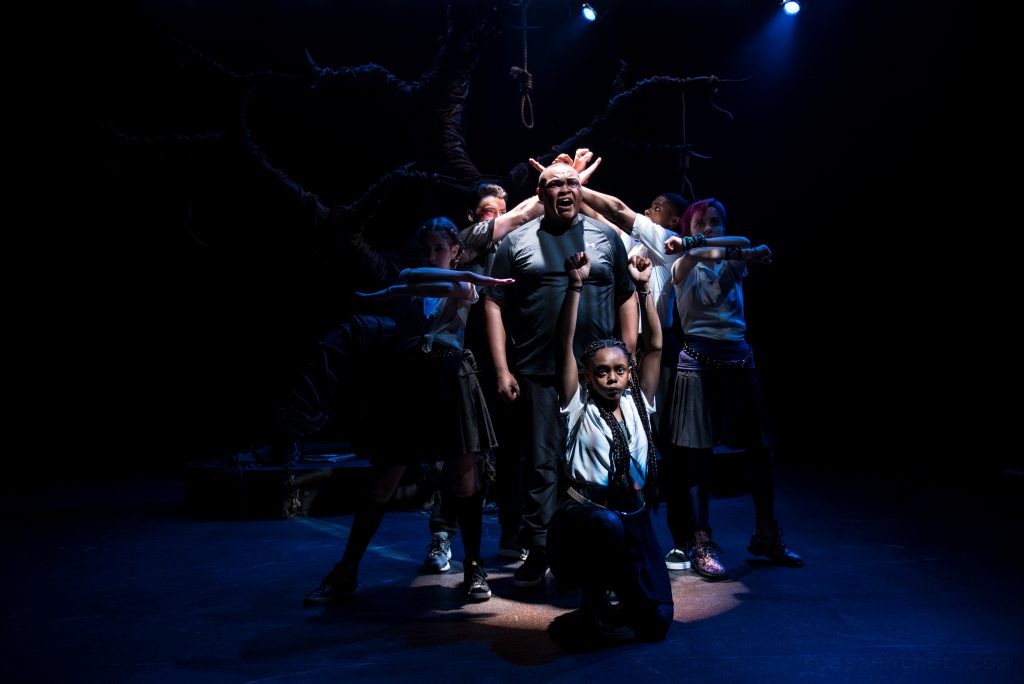 Blood at the Root. Photo by Ross Zentner.

Blood at the Root is a social justice drama that seeks to make high school students speak for themselves about the old lynching tree in their school’s backyard in Louisiana, and the turmoil that ensues when white students hang nooses on the branches. It’s also, alas, one of those cringing moments for a critic when the message is to be applauded, but the methods are overwrought.

The intent of the production at the Next Act Theatre until Feb. 24, after which it will visit area high schools, is certainly not simplistic in its thoughts and catches the right tone of confused but revealing arguments about race and behavior.

But as presented at 85 minutes, it is twice too long. The emotional wallop it seeks to establish starts out too hard. It is not an advance from a number of able talents I have seen do far better – including director Marti Gobel, a noted actress in her own right,  and a cast of emerging professionals, several of whom should be allowed to rise higher in theater without being singled out in this review. Because the fault is not theirs.

Gobel attempts to add a veneer of artistry with her heavy footed dance and stomp movements from the start, but it would have been better to subdue  such emphasis until the last half when it pays off. The normal shadings of rise and fall that usually mark her work are absent.

Given the acting approach, the early scenes needed a lighter throwaway touch with the dialogue to get us to understand the characters and the budding motors of their behavior. The sense of individual personalities is almost drowned out in the rhythmic overplaying.

Playwright Dominique Morisseau has put a lot of effort into having adolescents sound adolescent, but the actors’ movements and delivery work against that. It amounts to overemphasizing something overwritten in the first place.

In the last half – which reveals we didn’t need the first half to grasp what will happen – some evocative dialogue and cussing do explode around the assumptions that both blacks and whites, in forming their attitudes and words, are too quick to judge and have a lot to think upon. The most experienced actors add some physical dimension as well as emotional volume to these outbursts. Morisseau has a genuine skill with words if she can find the right vehicle to employ it. The play’s conclusion may strike many as abrupt, but it intends to leave the resolution of the problems just as dangling as our society does.

The set by Jason Fassl is quite effective – a tree with monstrous far-reaching limbs wrapped in rope, with hiding places for the newspapers and flyers that figure in the tale. The play’s basic honesty may reach the high school audience it is aimed at, but its observational criticism of our society is already behind the times.

Blood at the Root Gallery 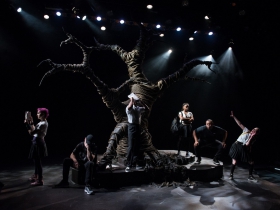 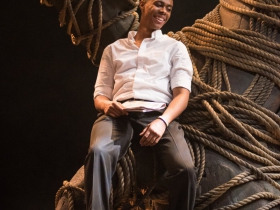 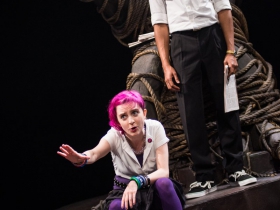 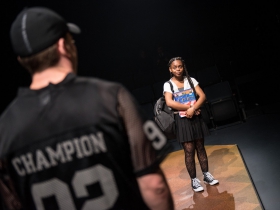 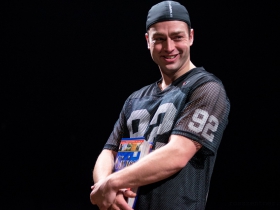 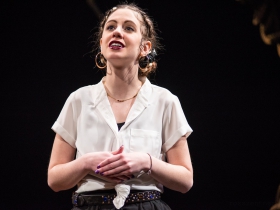