"Like no other early music ensemble you have ever heard..." Performing this Saturday. 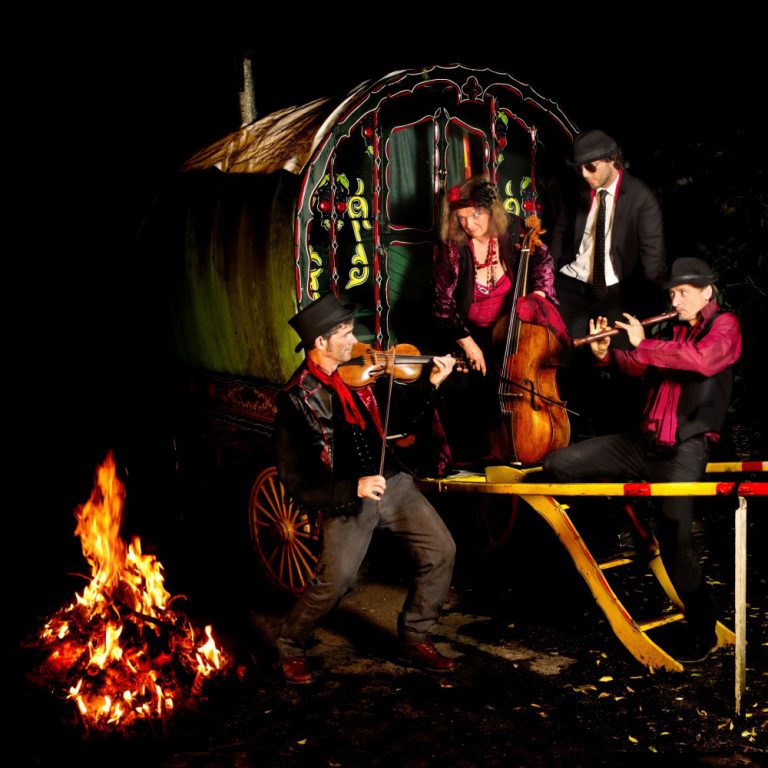 The Daily Telegraph offered this take: “Red Priest is like no other early music instrumental ensemble you have ever heard… bringing glee to the concert scene for a decade or more… transforming Baroque clichés into vivid drama, often at terrific speed and with practised coordination…. [with] a bedrock of tremendous skill and timing.”

The quartet’s name derives for Antonio Vivaldi‘s nickname – a result of his shocking red hair and status as a priest in the Catholic church. Many of his compositions were written for the all-female music ensemble of the Ospedale della Pietà, a home for abandoned children. He wrote hundreds of original works and developed a highly skilled ensemble able to manage his challenging works. The energy in his works and the mixed reputation Vivaldi developed over his life makes his nickname an appropriate one for this unconventional quartet to take on.

Consider the concert program selected for this visit, which is called “The Baroque Bohemians: Gypsy Fever from Campfire to Court,” and described as follows:

“The campfire crackles menacingly, covering the sound of the curiously Hobbit-like violinist winching his strings into tune (he has already broken three E-strings in the last hour, such is the frenzy of his bowing). A tall, lanky figure appears from the shadows wielding a sheaf of pipes, relishing the challenge of a musical duel with his arch-rival. From a dodgy-looking caravan on the edge of the clearing emerges a swarthy gypsy wearing suspiciously modern shades, hastily tucking in his billowing shirt, whilst in a neighbouring wagon the matriarch of the clan sets down her crystal ball and reaches – carefully, ominously – for her cello…”

You can preview their mix of sound, costume, light and other stagecraft in this concert video excerpt and a promotional video.

Selections from their CD may also be reviewed on YouTube.

The quartet explores traditional Eastern European music from the 17th and 18th centuries alongside Gypsy-inspired works by Telemann, Biber, Byrd and others, and extraordinary re-workings of Vivaldi and Handel through the eyes of a modern-day Gypsy band.

Those who are less certain whether they would like Baroque music will find this approach an enticing introduction to the emotionally charged milieu that created it. Many early music groups today have suppressed some of this energy. There is no question that the Red Priest’s musicians have gleefully turned it back on.

The Red Priest concert begins at 5:00 p.m. Saturday, January 26 at St. Paul’s Episcopal Church. The concert will be preceded by a pre-concert lecture at 4:00 p.m. St. Paul’s Episcopal Church is located downtown at 914 E. Knapp St., at the corner of Broadway and Juneau. Parking is available on the street and in the Lincoln High School of the Arts parking lot across the street from the church. The venue is very near the 14 and 30 bus lines and now The Hop.

The full program is also online.

The Early Music Now series continues March 16 with a unique pairing of the world’s finest lute players, Paul O’Dette and Ronn McFarlane, in a program of duets from Italy and England.