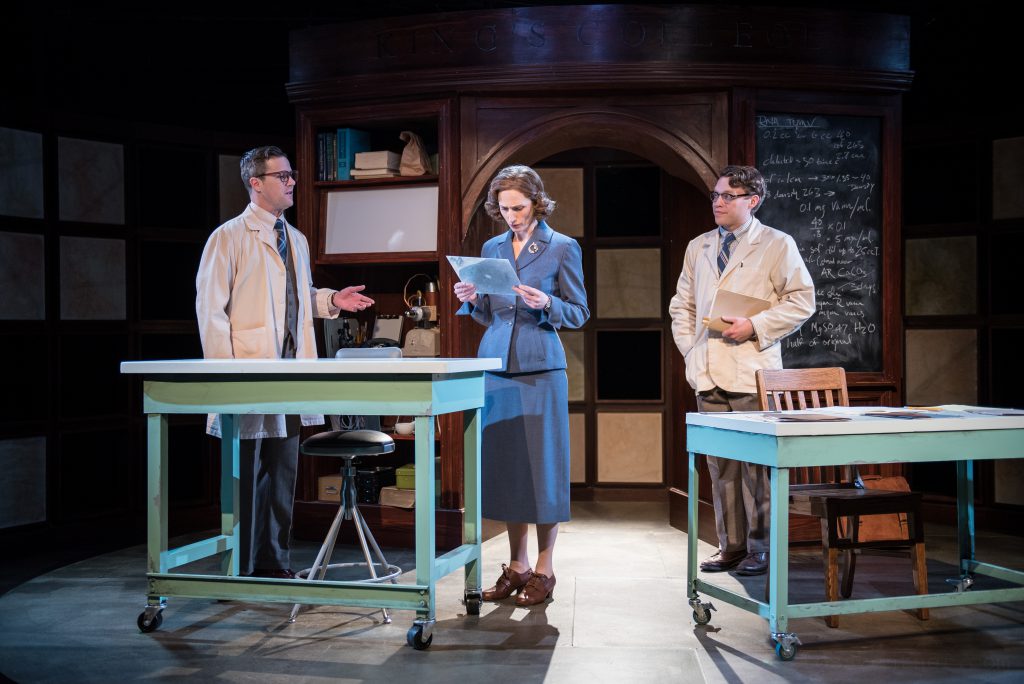 Renaissance Theaterworks in its emphasis on feminine themes has noted the rash of recent popular culture around women scientists ignored in their own times by a privileged male culture.

It’s been hot topic in today’s MeToo world from the movie Hidden Figures (NASA oversights) to the play Silent Sky (astronomy) and now to Photograph 51 through February 10 at the Broadway Center’s studio stage. This is a recent British play tapping the same vein with considerable historical accuracy dramatized as if this were a George Bernard Shaw debating club.

It is about chemist and X-Ray crystallographer Rosalind Franklin in the 1950s. She could have been part of the Nobel Prize for discovering the double helix DNA were it not for the routine sexism and anti-Semitism around her and her devotion not to prizes and shortcuts but to letting the work unfold in its own glory. So the glory hidden in her Photograph 51 didn’t fall on her and the most history and plays like this can do is express shame.

Playwright Anna Zeigler is more probative than I have been in this outline. She draws the characters, and director Suzan Fete trusts in what she drew. The result is an erudite wordy reflection on a prickly demanding personality who both awed and dismayed her male colleagues, refusing to join their “old boy” games or respond to their ideas of how women should behave or be treated. The story unfolds as a memory play with those who interacted with her recalling the encounters.

Franklin as played by Cassandra Bissell with dismissive glances and side of mouth putdowns (a winning performance though it doesn’t mine unexpected depths) doesn’t see the fortune the men do in her X-ray diffraction images of DNA. She also doesn’t take seriously, though the audience does, the warnings about those radioactive rays her photography equipment is emitting.

It is Zeigler’s interpretation of history that two of the men she deals with have romantic feelings for her (these are the moments when the dialogue gets a tad pretentious) and two other scientists trying to beat her to the Nobel were talkative comic bigots on their own. (One in fact was a racist but that is a whole other play.) Add in a self-deprecating observer of the conflict (played as our guide with winning droll humor by Josh Krause), and we have basically five men talking around and through one woman, who still holds her own.

Nick Narcisi and Trevor Rees are nicely distasteful as the Mutt and Jeff schemers who do win the Nobel. Joe Picchetti is the admirer from afar whose loving looks increase as he gets closer.

Her would-be lab partner is Neil Brookshire, an actor who relishes stiff upper lip stillness and exasperated delivery. He winningly plays the scientist frustrated that his nice-guy ways don’t cause a dent in Franklin’s intellectual armor. In a play that enjoys Shakespearean references, he longs to become Benedick to her Beatrice.

Director Fete doesn’t try to trick this play up with distractions. The staging is all about the interactions and even the erudition. She relies on the dialogue, which sometimes gets a little too abstract and then too obvious, as if every moment of these lives required a philosophical pronouncement. But the actors are strong and much of the conversation is intriguing. This is not a play of thunder but of sturdy rewards, like a good dinner conversation. 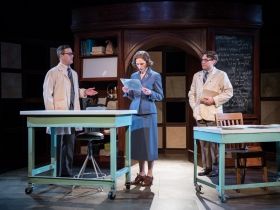 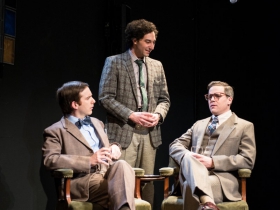 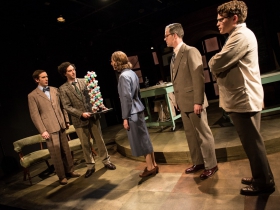 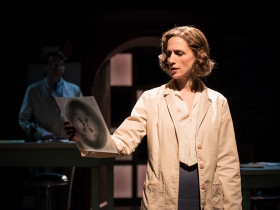 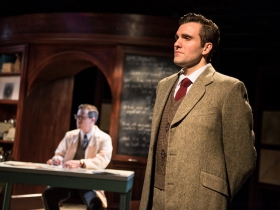 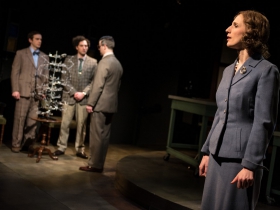