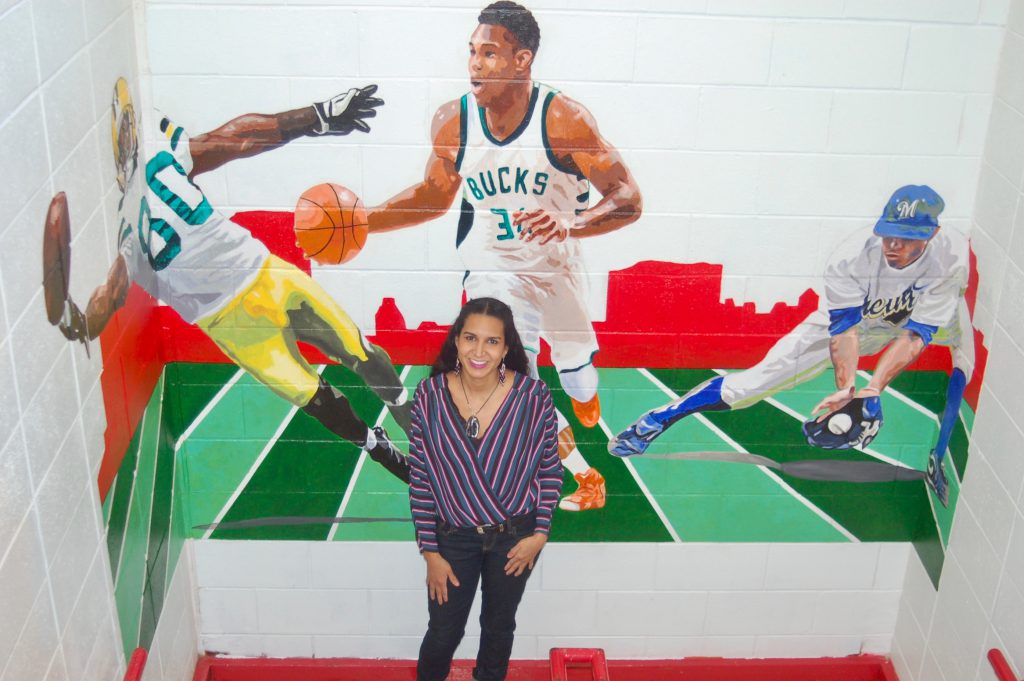 Artist Rozalia Hernandez-Singh worked with youth at the COA Riverwest Center, 909 E. Garfield Ave. to create this mural in the east stairwell. Photo by Edgar Mendez/NNS.

By the age of 3, Rozalia Hernandez-Singh was already trailing alongside her father, well-known muralist Reynaldo Hernandez, as he worked passionately on an outdoor mural on Martin Luther King Jr. Drive in the Harambee neighborhood. Though the mural has since been painted over, many of her father’s other works remain, and have become landmarks in the communities in which they are located, she said.

Perhaps the best example in Milwaukee of the impact of public art is one of the many projects that Hernandez-Singh and her siblings worked on with their father in 1993: the iconic South Side “Mural of Peace.”

“We painted that piece by piece in a warehouse on 4 x 8 boards,” recalled Hernandez-Singh, of the mural on the south wall of the Mercantile Lofts building, formerly the Esperanza Unida Building at 611 W. National Ave., which can be seen from Interstate 43.

Hernandez-Singh is carrying on her father’s love of creating art for the community.

Currently, she’s working on two murals inside the COA Riverwest Center, 909 E. Garfield Ave. The first, which was recently completed, is on the east stairwell of the center and features retired Green Bay Packer Donald Driver, Milwaukee Bucks star Giannis Antetokounmpo and an ambiguous Milwaukee Brewers player. In the background is the Milwaukee skyline as viewed from the Riverwest Center.

The theme of that mural was chosen by young people who frequent COA, according to Tom Schneider, the organization’s executive director. 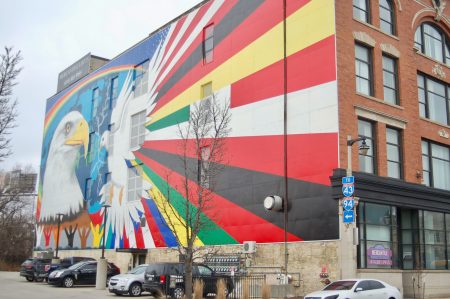 Rozalia Singh-Hernandez and her siblings helped their father, Reynaldo Hernandez, paint the iconic “Mural of Peace” in the 1990s. Photo by Edgar Mendez/NNS.

“The youth got together and voted on what they wanted in the mural, and they also helped to paint it,” Schneider said. He added that Hernandez-Singh was brought in to paint the murals both because of the quality of her art and her ability to work with youth.

One of the youngsters most eager to work on the project was a 7-year-old boy, said Hernandez-Singh. He asked questions such as how many coats of paint they would need and made sure he had his art lingo down. He was among many youth who were excited to showcase their own inner artist on the project, she added.

“They get so excited and ask questions. I love it because I think that art is an escape. It helps keep young people out of trouble and is a great option for people who are looking to go in a positive direction in life,” she said.

Art is one of the many components of the comprehensive youth programming offered at COA, according to Schneider, who said it’s one of many activities that youth at the center respond well to.

“We have some amazingly talented artists at COA,” he said.

From a young age, Hernandez-Singh and her siblings were schooled on how art, especially murals, can impact a community, according to her father.

“I taught them about the history of murals, and how they were a way to celebrate heroes and even a means of protest in the ‘60s and ‘70s. I also taught them how murals can make the city a better place,” said Hernandez, who still paints and draws.

The sports-themed mural at COA and the second mural Hernandez-Singh will create there are replacing murals that were painted 20 years ago, Schneider said. They were fading away, and it was time for youth participating in the program to have their own work on the wall, he added.

“It’s a project that gives them a sense of ownership and pride,” Schneider said.

Schneider said there are no plans to ask the athletes, including Bucks star Antetokounmpo, to check out the mural in person. But the team has been a strong supporter of youth programming at COA, having provided a new scoreboard and free tickets to games, he noted.

The second mural will feature a camping theme, which is a major component of COA’s programming. COA runs both summer and winter camps, and is the longest-running camp in Wisconsin, Schneider noted. That mural will be painted on the center’s north stairwell.

Hernandez-Singh also works with her father and siblings as a caricature artist. Her recent portfolio includes illustrating Deanna Singh’s book, “I Am a Girl of Color” and working on “Our Beauty in Strength,” a large-scale mural in Bay View that was created by an all-female collective of artists last summer

Hernandez-Singh, who also teaches art to MPS students as part of her work with Arts @ Large, said she is relishing her time working with youth at COA on the murals.

“Just looking at the reactions of the kids when they see the finished product of something they’ve been working on is so rewarding,” she said.

“I wasn’t able to put all my time into my art because I was busy with my two kids and husband, but now I’m in the position to get out there on my own and work on more projects in the community,” Hernandez-Singh added.

It’s a trajectory that no doubt pleases her father.

“I’ve always wanted her to do it for the community; to be able to create art that has a greater impact — and that’s exactly what she’s doing,” Hernandez said.