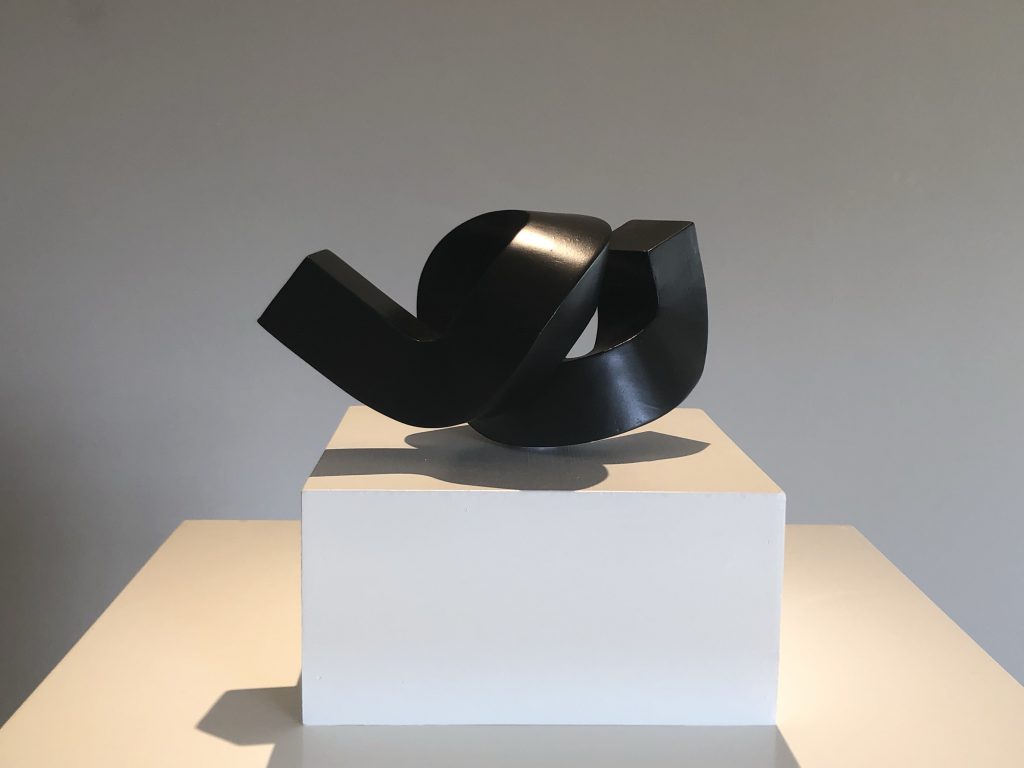 The Lynden Sculpture Garden’s latest exhibition, Clement Meadmore: The Models (on display through March 31), features eight models of renowned Australian-born sculptor Clement Meadmore (1929-2005), which were (and continue to be) used to create large-scale works of public art around the globe.

Meadmore originally studied aeronautical engineering and after graduating from the Royal Melbourne Institute of Technology, he began designing furniture and soon gravitated to art, creating his first sculpture of welded steel in 1953. By the 1960s he had settled in New York City and later became a U.S. citizen. There are elements of both modernism and minimalism in his work, which has won global acclaim.

Meadmore’s large outdoor sculptures, Upstart (1967) and Double Up (1970), (which resemble a pair of index fingers and thumbs pointing upwards) are a part of the Lyndon’s permanent collection.

“Clement Meadmore: The Models continues our exploration of the work and creative processes of artists in our collection, many of whom were also making smaller sculpture, furniture, or works on paper,” writes Lynden executive director Polly Morris.

The artist’s minimalist sculptures express a jauntiness characterized by playful curves. Shapes twist “as if in a mood of aspiration or exhilaration, or simply to release physical forces held in tension,” according to www.meadmore.com, a website dedicated to the sculptor’s work.

Meadmore’s background in aeronautical engineering and furniture design are reflected in his passion for precision, form and symmetry. A framed picture of one of his etchings on paper (22 x15 inches), half-circle shapes with cross-hatching and other shading techniques, hangs on the wall in the front foyer of the gallery.

Reminiscent of a protractor, this etching illustrates Meadmore’s fascination with shapes and their spatial relationships.

During my recent visit to Lynden, Morris noted that the artist’s sculptures are “fiercely geometrical.”

“He is very interested in balance and motion,” she added.

However, the artist’s works are abstract and anything but rigid. When viewed from different angles, Meadmore’s models, with their many unexpected curves, appear multi-dimensional, taking on new shapes.

The sculptor worked primarily with Cor-TEN steel. Meadmore reportedly chose this medium for the way it develops a rust-colored finish, which reminded him of abandoned industrial structures.

Four sculptures are enclosed in a vitrine. Several are made out of bronze; Here Comes Charlie, for example, appears to be highly polished, almost gleaming. Hobnob, 1992 (6 x 16 x 8 inches), has more of the typical dull bronze sheen.

The gallery’s overhead lighting produces a dramatic shadowing effect on some of Meadmore’s works, which at first glance appears to be part of the sculpture.

Meadmore was an ambitious artist, designing works of all scales, from palm-sized to life-sized to large-scale. Many of his public art sculptures span over 25 feet. Meadmore even planned to design a 600-foot sculpture (which never materialized).

His bronze model Uprising (9 x 4 x 4 inches), which spirals skyward, could reflect the artist’s ability to “think big.” Several of his works contain the words “up” or “out” in the title—Upstart, Double Up, Outspread, Uprising. Meadmore’s works share a common theme of optimism and forward thinking.

His contribution to public art continues to be significant. According to Meadmore’s website, “his sculptures deny their physical reality, suggesting weightlessness. Because of this extroverted and animated character, his public commissions provide oases of humanity in the urban environment.” 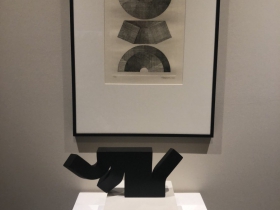 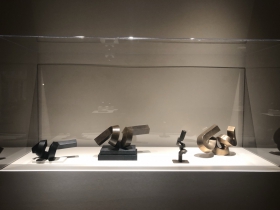 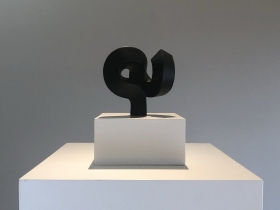 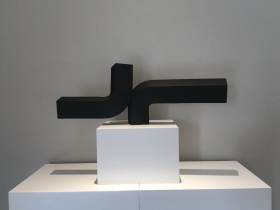 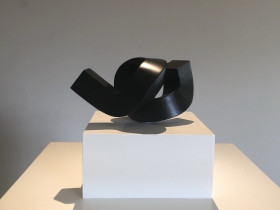