By Jon Peacock, Wisconsin Budget Project - Jan 1st, 2019 12:04 pm
Get a daily rundown of the top stories on Urban Milwaukee

New polling helps explain why very few Republican lawmakers have been celebrating publicly after a federal judge issued an opinion declaring that all of the Affordable Care Act (ACA) is unconstitutional. The latest polling results from the Kaiser Family Foundation show that many parts of the health care law enjoy very strong support among both Democrats and Republicans.

If the ruling of the conservative federal judge is not overturned by higher courts, it will mean that all of the ACA has essentially been repealed without a replacement plan. That would cause turmoil in the health care industry and the elimination of politically popular policy measures that are benefiting almost all Americans in one way or another.

In light of recent polling data, as well as the effective use that Democratic candidates made of the ACA during campaign season, the reactions of most Republican lawmakers regarding the preliminary court ruling were much more subdued than we would have expected if the ruling had been issued a couple of years ago.

Although the protection of coverage for pre-existing conditions is one of the more popular aspects of the ACA—with the backing of 65% of Americans, including 58% of Republicans—it’s not the only accomplishment of the law that enjoys broad public support. The following bar graph illustrates the results of opinion polling in November, which found that many of the other parts of the ACA are even more popular with both Republicans and Democrats than the guarantee of coverage for pre-existing conditions. 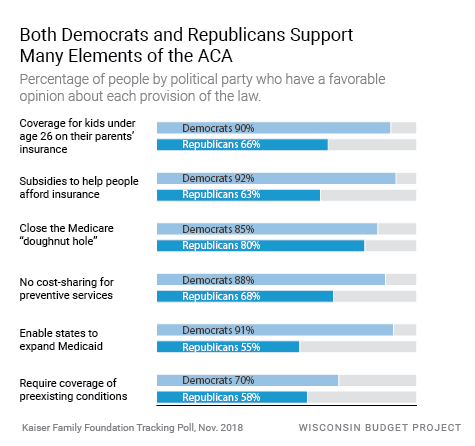 Both Democrats and Republicans Support Many Elements of the ACA

The following are just a few of the many examples of portions of the ACA that have even stronger backing from voters than the coverage of pre-existing medical conditions:

Wisconsin Republicans have even more reason than their colleagues in other states to be worried about the political implications of the pending litigation because they have firmly attached themselves to the lawsuit. Wisconsin’s current (outgoing) Attorney General, Brad Schimel, has been a co-leader of that effort to get a court to strike down the entire law.

Even though Schimel’s involvement in the case appears to have been a significant factor in his election loss in November, Republicans in the state legislature approved a bill during their recent lame-duck session that impedes the ability of the incoming governor and the Attorney General-elect to withdraw Wisconsin from the ongoing litigation. Just hours after Governor Scott Walker signed that bill into law, the federal judge in Texas issued his ruling declaring that all of the ACA is unconstitutional.

Faced with the polling results showing the ACA’s popularity, as well as evidence to that effect from the midterm elections, lawmakers who have long opposed the ACA are increasingly saying that they would preserve the popular parts of the law, such as coverage for people with pre-existing conditions. Senator Ron Johnson did that again recently, when he said that he and his colleagues support that part of the ACA. However, the claims of support for various parts of the law almost never include a specific description of how that part of the law would be maintained. Furthermore, the various replacement bills offered in 2017 never included effective substitutes for the consumer protections in the ACA.

The campaign pledges to protect coverage of pre-existing conditions illustrate those problems. Governor Walker promised shortly before the election that he would take the exact language of the ACA and put it into state statutes. However, as I explain in a Kids Forward blog post today, he and Republicans in the legislature only wanted to put into state law a small part of the ACA provisions that work together to ensure that people who have pre-existing conditions have access to quality, affordable health care. (And ultimately they couldn’t round up enough votes for the ineffective bill that Republican State Senators brought to the floor during the extraordinary session).

Although much of the attention on the ACA in recent months has focused on the issue of maintaining a guarantee for covering pre-existing medical conditions, as the lawsuit winds its way through the appeals process we will hear a lot about other important parts of the law, many of which are even more popular and benefit far more people. That will put the state and federal lawmakers who oppose the ACA in a very difficult position – especially those who voted to keep Wisconsin in the ongoing litigation challenging the constitutionality of the entire law.

Read more about the predicament of Republican lawmakers in this column from the Washington Post: Why Republicans (secretly) want the ACA to survive.

And read more in this Kids Forward blog post about why guaranteeing coverage of pre-existing conditions isn’t something that can be easily accomplished by state lawmakers if all or part of the ACA is struck down by the courts.