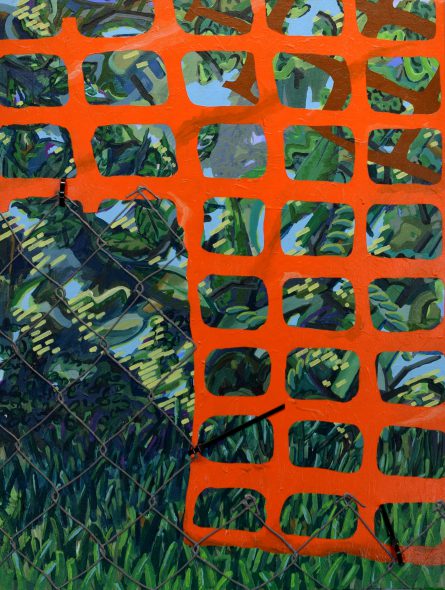 Ukrainian-born, Chicago-based artist Ian Sonsyadek is a graduate of Milwaukee Institute of Art and Design who works in the real estate industry, a career which has given him an insider’s perspective on the urban housing market.

“It’s a flexible position, and allowed me to make this show actually happen,” says the artist.

The show is “Landscape: New Development,” a collection of 30 works on exhibit through January 12 at the Var West Gallery, 423 W. Pierce St., in Walker’s Point. Sonsyadek explores the relationship between natural and urban landscapes and the cycle of housing development, often using personal observations.

In much of his work, the artist paints from the perspective of Chicago city workers, contractors, and residents. Sonsyadek typically uses building and contractor materials, among them duct and painting tape, zip ties, camouflage tarp, spray paint, and even brick as artistic mediums. The artist also incorporates digital photography into his work.

“I think that comes from approaching art-making in a collage type of mentality,” said Sonsyadek. “Lately, I have been focusing on the parallel between how neighborhoods come to be as they are, and the piecemeal process in which I make my paintings.”

Var West Gallery, housed in an industrial building over a century old, with a working freight elevator and painted white brick, is a fitting venue to host “Landscape: New Development.”

The exhibit begins with a plastic hard hat, tarp, and neon yellow contractor’s vest (which could easily be mistaken for things an actual worker left behind at a construction site) hanging on a hook near the gallery’s entrance.

Fencing (acrylic and zip ties on material) features green foliage peeking out from blaze-orange plastic mesh. In the painting, “FP BBQ In Hybrid City Bio Block” (acylic and spray paint on canvas) an unseen figure on a rooftop deck, preparing hot dogs and burger patties on a grill, gazes at his street below. A slightly ramshackle red house has a “For Sale” sign in its yard. Through the haze of smoke from the grill, we see a home with a historical façade.

Several of Sonsyadek’s works are abstract; strokes of bright purple and green are placed on a canvas amidst conic shapes and lines (meant to represent a parking lot).

“The paintings, peculiar in their infrastructure, are meticulous topographies of color and texture,” as the Var West Gallery website describes it.

Half a dozen smaller paintings feature large metal dumpsters bearing Waste Management and other company logos, and city landscapes beyond the trash sites.

The waste motif appears to represent “how inconsiderate developers can be,” notes Hintz.

“Often times, the dumpsters were the clearest, biggest, and most obnoxiously obvious indicators that some place was about to be torn down, or was halfway there,” adds Sonsyadek.

In Sonsyadek’s world of hard hats, bright yellow vests, tools, and wrecking balls, demolition and accumulation of waste are commonplace. Housing is considered disposable. As part of the urban housing cycle, old homes are replaced by new ones without a second thought.

Rather than a social commentary, however, Sonsyadek considers his work to be a “small case study;” a series of observations on urban housing development. 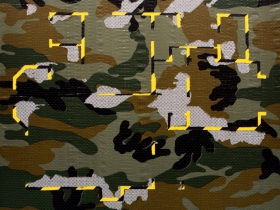 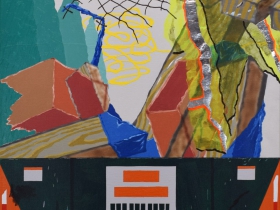 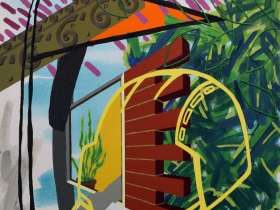 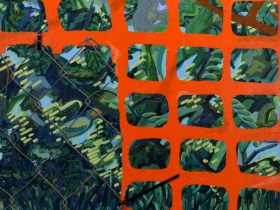 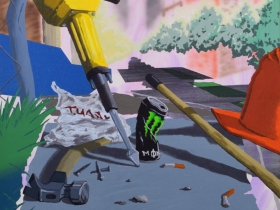