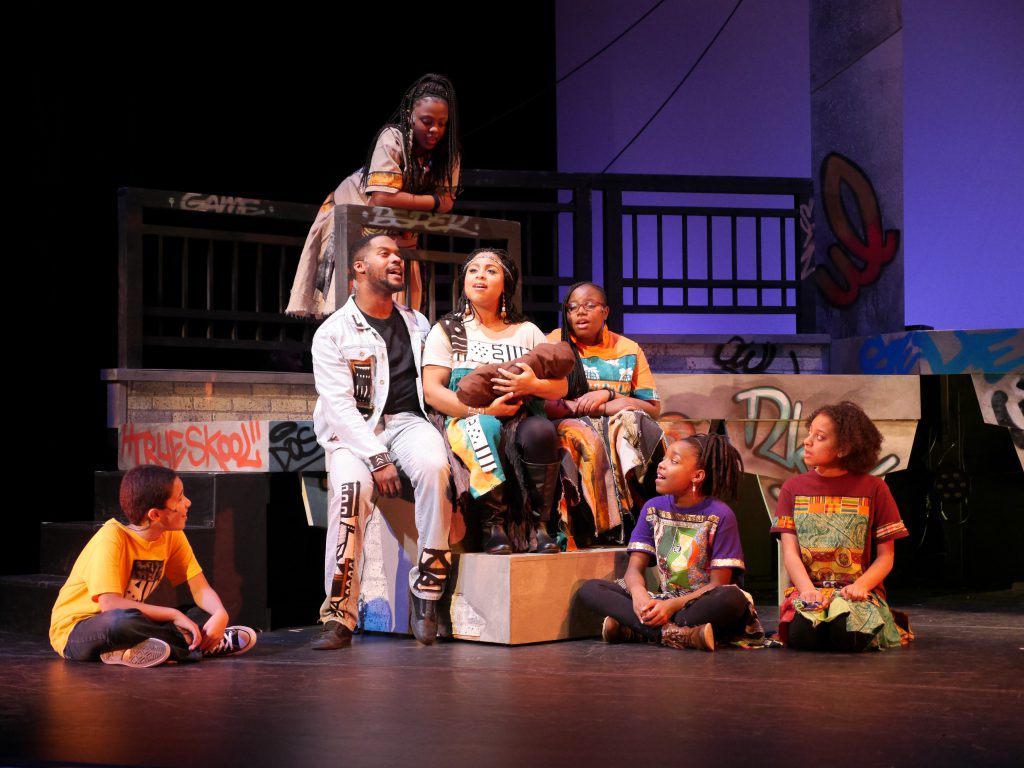 Black Arts MKE still likes to go after the raw Christmas tale with a frank directness about birth and suffering that other professional theater outlets no longer attempt. The modern theater has long abandoned direct presentational pageants in the tradition of the Oberammergau Passion Play of South Bavaria or even prancing celebrations such as Australia’s Adelaide Christmas Pageant.

Today’s theaters prefer invented allegories about the meaning of the holidays — like A Christmas Carol and The Nutcracker —  leaving to hymnal centered Christian churches or fervent black gospel services the direct pageants. It’s sort of like saying we are too sophisticated or jaded to be moved by Mary and Joseph seeking shelter in a manger. We’ve heard that one before.

Langston Hughes, a black poet who died in the 1960s, thought that if you build a traditional pageant with contemporary spirituals and black America themes, there would be ample room to brace it with the relevant suffering he saw in modern times. Thus his Black Nativity could rise out of its Christian roots to a presentational but meaningful platform closer to the troubles and torments of urban people. The Nativity in this view is far more than a haven for the spirit but a goad to change the times.

If that was the aim of the Bronzeville Arts Ensemble in its fourth annual interpretation of Black Nativity, through Dec. 16 at the Marcus Center for the Performing Arts’ Wilson Hall (new name for the Vogel Hall in back of the PAC Water St. entrance), if that is why the Black Arts MKE umbrella group wants this production to become a welcome tradition, that is applaudable. It is certainly artistically hinted in the journey from Bethlehem to modern street.

But this is largely an extended gospel church meeting, with the audience asked to join in and sing along. Patrons are urged not to sit still but to provide echoes for the remarkable singing, weaving in and out of some of the most familiar styles of spirituals, gospel, Motown and group hand and hip movements available to emulate and interpret the explosion of black-themed music that rule our age.

The script has been much tweaked, modernized and replenished – after all, Mary J. Blige and Puff Daddy weren’t around when Hughes wrote. And it’s hard to think of Handel complaining about this use of “Joy to the World.”

So you may have heard the riffs before, some of the tunes before, and the percussion beats that drive you into submission, but seldom as well done and felt within the momentary jubilation of high notes and religious fervor by an accomplished gathering of local singers along with talented middle schoolers from Milwaukee.

Singer-dancer Di’Monte Henning offers a moonwalking Joseph and a constant irrepressible delight in being onstage.  A legion of powerful singing soul sisters provides the reviewer dilemma of “if you name one you have to name all.” Shawn Holmes’ bouncy baritone elevates many passages. The middle schoolers have been taught to sing and gyrate in perfect coordination and now need to find characters to hold onto more tightly in between their moments.

If approached as a forthright Christian service by an expertly staged choir with movement, the production is a good deal. Choreographer Christopher Gilbert can leave proud of the precision of the peripatetic counterpoint. Madelyn Yee’s simple bridge set echoes urban murals and graffiti around Milwaukee and provides multiple platforms for the constant crowd scenes.

For costume designer Beverly Echols, the cast amusingly whips off church robes to reveal street T-shirts. The messaging style of the tableaus is as obvious as the “VOTE’ sign moving around the stage.

Joseph vanishes into the wings as Mary goes through birth agonies that are more about writhing than poetry. Black leather thugs mock the shepherd with no follow-through but more fine music.

Even a second act —  trying to humanize the old Biblical story with pinpoint references to urban complaints today and to the MeToo movement — never goes far enough into the possibilities to be regarded as meaningful theater.

Veteran director Malkia Stampley is being hoisted on her own petard. Having given over so strongly to the enthusiastic power of held gospel notes and uniform group movements, she can’t break out of that mold to explore issues hovering in the background or even ones she raises – such as society, even Christian societies, sharing a complex role in the MeToo movement and failing to embrace the basic Christian message in our daily interactions.

To my mind, the structure of Black Nativity left those openings to be filled. Instead, the production is celebrating different aspects. But it needs to grow in theatrical prowess for that approach to fully succeed. 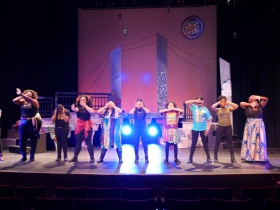 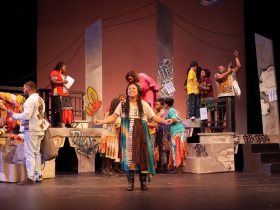 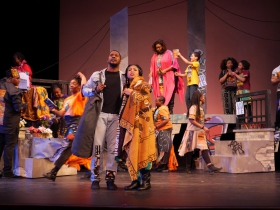 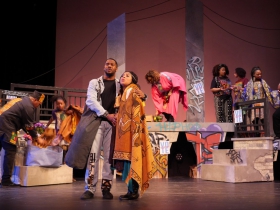 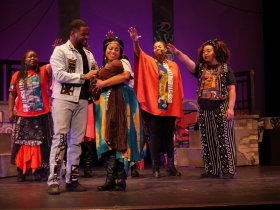 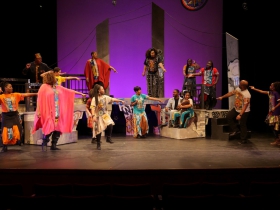