By Andrea Waxman, Milwaukee Neighborhood News Service - Dec 5th, 2018 10:56 am
Get a daily rundown of the top stories on Urban Milwaukee 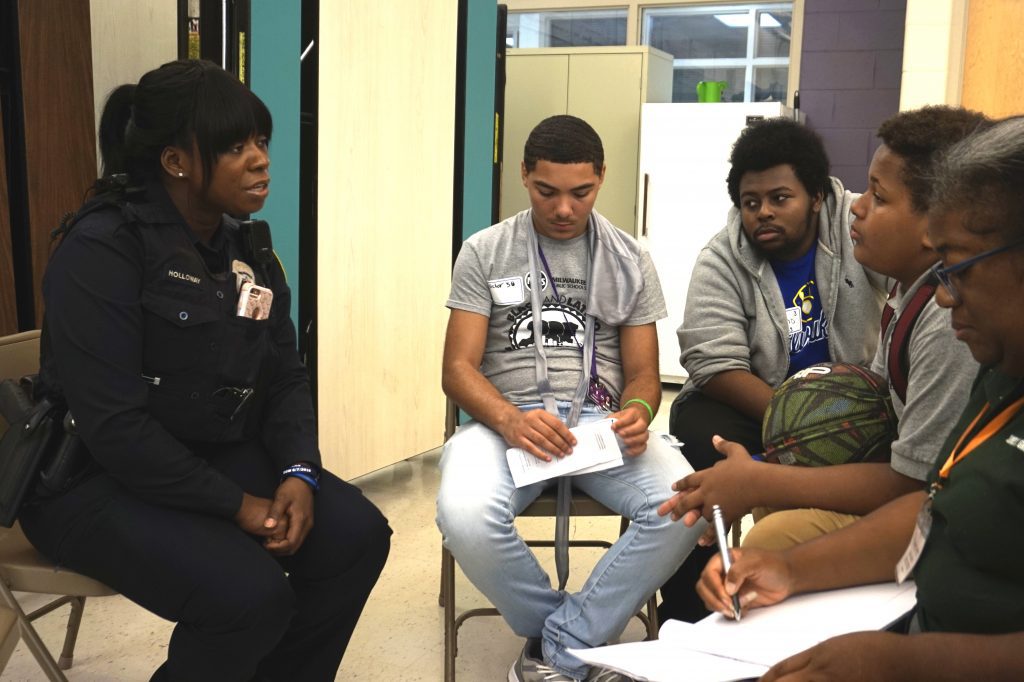 Keontay Avery’s parents were taken from him by the police when he was 5 years old.

“They were part of a crime but didn’t really do anything,” he said.

Now 17, Avery told his story to a small group that included a police officer, a police recruit in training, five teens, an adult facilitator and a youth facilitator. He was responding to Officer Letitia Holloway’s inquiry into his reasons for disliking the police.

Holloway followed up by inquiring whether Avery was also angry at his parents for their part in creating the situation that led to this separation.

Avery was one of 44 young people ages 13 to 24 participating in a recent Police & Youth Listening Circle at the Silver Spring Neighborhood Center, 5460 N. 64th St. Eight officers from the Milwaukee Police Department and two recruits from the Police Academy also participated.

The circle is the first in a three-part program at the Frank Zeidler Center for Public Discussion that aims to improve relations between youth and police. The goal is to give them an opportunity to talk to each other about their personal experiences, perceptions and feelings; build trust; and see each other as individuals.

“It is often the first positive experience either side has had with a member of the other side,” said Katherine Wilson, executive director of the Zeidler Center.

The event began with a pasta dinner at which participants were able talk informally. Following an icebreaker activity that brought everyone to their feet and moving around the large room, participants were divided into small groups. Sitting in a circle, youth and police were led through a structured conversation by facilitators.

They explained the rules or “circle agreements,” which included a promise to speak only for oneself about personal experiences, to speak respectfully and not put others down, interrupt or use cell phones.

Participants began by sharing two things about themselves. One youth wants to become a veterinarian; another hopes to join the Air Force. Avery, an Assata High School student, said he used to play basketball and volleyball. 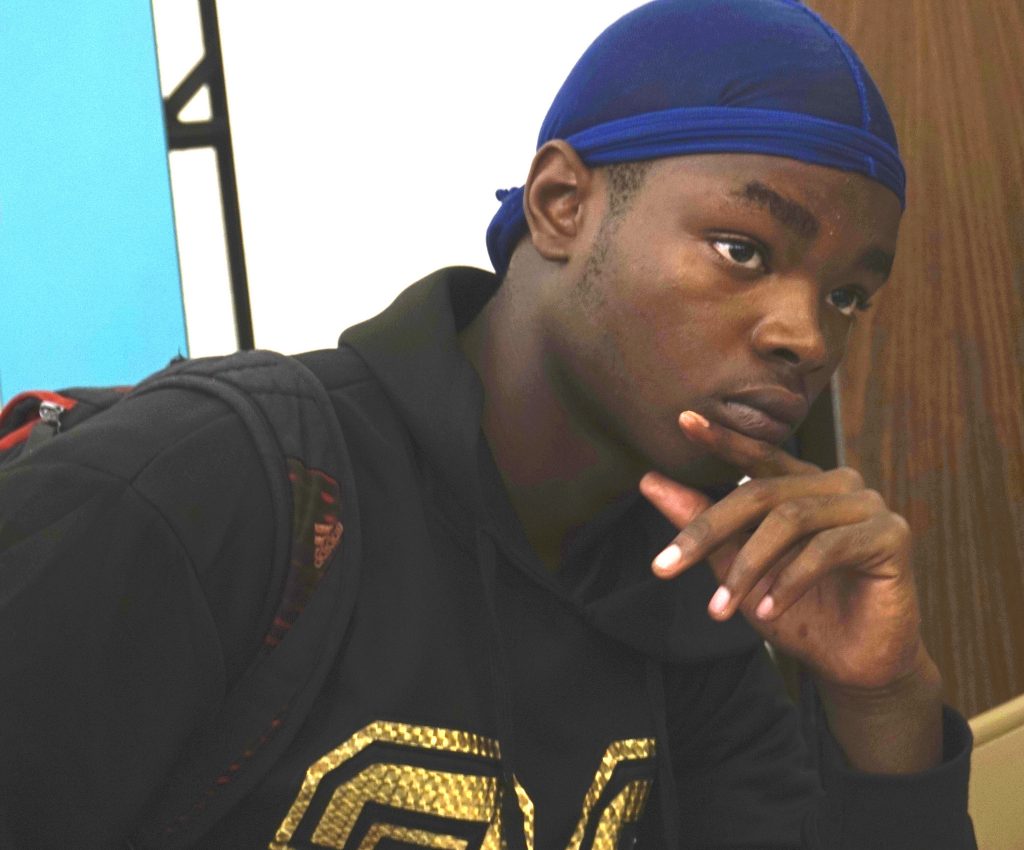 Responding to written prompts, circle members took turns contributing thoughts, observations or experiences. With each round, the comments grew deeper and more personal. From describing a time when it was easy or difficult to build trust with another person, the questions moved to “how can we increase trust between youth and police officers?”

Several teens in the circle expressed frustration with the negative portrayal of black youth constantly projected by the media.

Police recruit Joseph LaCroix II, who is white, seemed surprised to hear this. Although he is a product of Milwaukee Public Schools and said he feels comfortable with all kinds of people, the youths’ discussion of their image in the media “absolutely made an impression on me,” he said. He had never participated in a discussion with black youth before, he said.

“This is absolutely a totally new experience for me,” LaCroix said.

Avery attended the listening circle at the suggestion of the youth director at Silver Spring Neighborhood Center, where he goes every day after school. Assured that he could leave at any point if he didn’t like it, he stayed for the whole program. It was difficult, he said, because he fears speaking in public and isn’t sure if he will attend again. But he said he felt that LaCroix “was understanding what the black community was going through” and would think about Holloway’s challenge to consider both sides of his parents’ removal by police.

Holloway, who works in MPD’s Office of Community Outreach and Education, said she was amazed by the way the young participants opened up.

Regarding her exchange with Avery, she said, “Sometimes the kids don’t know how to deal with the anger emotions and how to get over it and get through it and face it. And they just harbor (the anger) and they hold grudges and then they develop this dislike for police.”

She welcomed the opportunity to give Avery some information to help him see things from both viewpoints, she said.

“I grew up just like him. I had the same thoughts. I don’t like the police because they did this to these relatives of mine … I got beyond that because I grew up and I understood both sides of it,” she said.

“This listening circle is a really good way to help bridge the gap.”

Interested young people can join additional listening circles, and those who are 18 or younger can participate in the second part of Zeidler’s program, the more-intensive Youth Police Initiative workshop added this year.

YPI is based on a program established in 2003 by North American Family Institute (NAFI), a Boston nonprofit. It provides youth with tools for setting goals, leadership and making decisions. The week-long workshops include relationship–building activities, exchanges of personal experiences between officers and youth, and preparing presentations given by each participant at the end of the workshop. YPI workshops have been held in the Sherman Park, Muskego Way/Clarke Square, Metcalfe Park and Silver Spring neighborhoods this year.

Youths who complete the workshop can attend a graduation celebration, where they are awarded a diploma and an $80 stipend, Wilson said.

She noted that data shows that the program is making an impact. “Of the youth we’ve polled so far, we’ve had a 54 percent increase in youth who can identify an officer who they would trust to call in times of crisis,” she said.

The third part of Zeidler’s program is a one-day Youth Facilitator Training at which teenagers ages 14 to 18 are paired with a mentor for a year to hone their skills. During that year they help facilitate six discussions. The focus is on discussions with police officers, but youth facilitators are also invited to Zeidler’s broader range of community discussions, Wilson said. “We have a goal of training 20 youth by the end of 2019 and we’re already more than halfway there,” she said.

Youth facilitator Victor Hudson, a 16-year-old Alexander Hamilton High School junior, said that getting the stipend is “cool” but he did not participate in the facilitator training for the money.  “I was in it to meet people and progress in my communication skills,” he said, adding, “I enjoy coming here and (working with) young kids because I can help them improve their life and make better choices.”

The Zeidler Center started organizing discussions between residents and police officers in the Amani, Metcalfe Park and Harambee neighborhoods in 2015. It did a year-long series with adults, youth and police the following year and in 2017, expanded to the Clarke Square and Sherman Park neighborhoods.

This year, local philanthropists Ronald and Micky Sadoff, who had become interested in NAFI’s Youth Police Initiative, brought that program to the Zeidler Center, where they are funding a two-year pilot.  Greater Milwaukee Foundation, Northwestern Mutual Foundation and Bader Philanthropies also provide support for Zeidler’s work with police in neighborhoods.