Consider “Who Do You Love,” for instance. 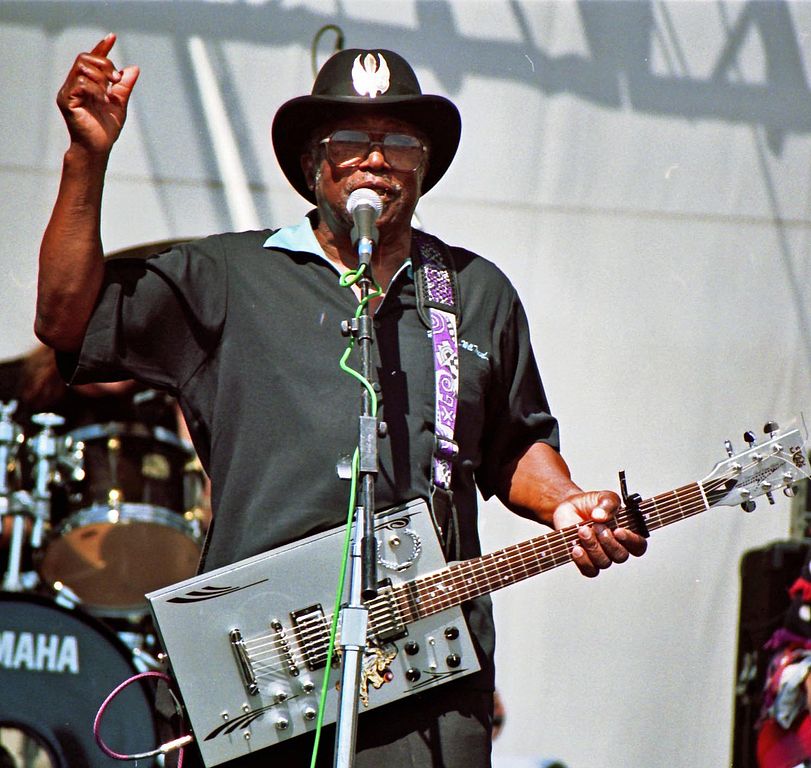 Oh gosh, don’t tell me I’ve never written about Bo Diddley. That is high treason in the field I dally in and probably punishable by rattlesnake whip. Bo invented that weapon and it’s featured, along with his infamous human skull chimney, in a masterpiece of American folk art, “Who Do You Love.”

Bo’s genius comes directly from Africa, where rhythm comes first, and Arkansas, where he raised by an aunt before moving to Chicago, a city that tended to pay attention, and sometimes money, to off-the-wall inventors. I use that last word deliberately, for the Bo Diddley beat, which is familiar to anyone who ever sang “shave and a haircut,” is an innovation that enlivened the already lively world of Rock‘n’Roll and eventually landed him in the Hall Of Fame.

In the 1950’s Chess Records was arguably the most productive studio in the country, rivaling Sun in Memphis and Cosimo’s in New Orleans. I’ve written about Chuck Berry, Muddy Waters, Etta James and Howlin’ Wolf, all Chess artists. If you ever find yourself in Chicago, make it down to 2120 Michigan Avenue and take the tour. It’s still the same, minus the original gear, and the spirits of all these artist are in the air. The one playing a square Gretsch guitar is Bo.

Bo went by a couple names before settling on his odd moniker, the one he was known by prior to that was Ellas McDaniel. You must admit the Chess artists had the best names and a close inspection of the catalog tells you it also may have had the best lyricists. Exhibit A and B: Chuck Berry’s timeless paeans to teenagers and music, which I consider poetry, and Willie Dixon’s smartly twisted blues classics. Bo kept up and then some as this song’s lyrics attest:

I walk 47 miles of barbed wire,
I use a cobra-snake for a necktie,
I got a brand new house on the roadside,
Made from rattlesnake hide,
I got a brand new chimney made on top,
Made out of a human skull,
Now come on take a walk with me, Arlene,
And tell me, who do you love?

Tombstone hand and a graveyard mine,
Just 22 and I don’t mind dying.

I rode a lion to town, use a rattlesnake whip,
Take it easy Arlene, don’t give me no lip,

Night was dark, but the sky was blue,
Down the alley, the ice-wagon flew,
Heard a bump, and somebody screamed,
You should have heard what I just seen.

Arlene took me by my hand,
And she said ooowee bo, you know I understand.

Arlene must have considered herself one lucky woman. And why “you should have heard what I just seen” hasn’t become common parlance is beyond me. The luster is off the MacArthur Foundation for not giving this man his genius grant. It would have been worth it if only to see him pull up at the ceremony and parallel park his lion. The beauty of that ridiculous series of brags is you can’t read it and keep a straight face — hearing it only intensifies the pleasure.

In the world of fine art, the Trump-ish wall between schooled, self-conscious art and what has been called outsider or naive art is crumbling, and that’s good. There is a huge show right now of drawings by self taught artist Bill Traylor at the Metropolitan Museum in New York. Using cardboard and other inexpensive materials he created art that deserves space next to Picasso or O’Keefe.

One of the reasons I like these kind of artist is the sense of real urgency in their expression. It’s one thing to study art and music in college, where you might get straight A’s and never connect to the power source Bo and Bill tapped into at will. Of course there’s room for both kinds of artists, but I lean toward underdogs, they’re scrappier.

Bo Diddley suffered from a lot of the same bad deals other black pioneers of 50’s music did. He was ripped off and had a right to be bitter, and it’s been reported that he was sometimes. It’s a sad tale told way too often; the fountain of joy we tap into provides little for its creators. Up in heaven, where everything is perfect, an angel named Bo is playing a square harp and teaching the saints syncopation. Down here I await the second coming, maracas at the ready.

One thought on “Sieger on Songs: The Sly Rhythmic Genius of Bo Diddley”