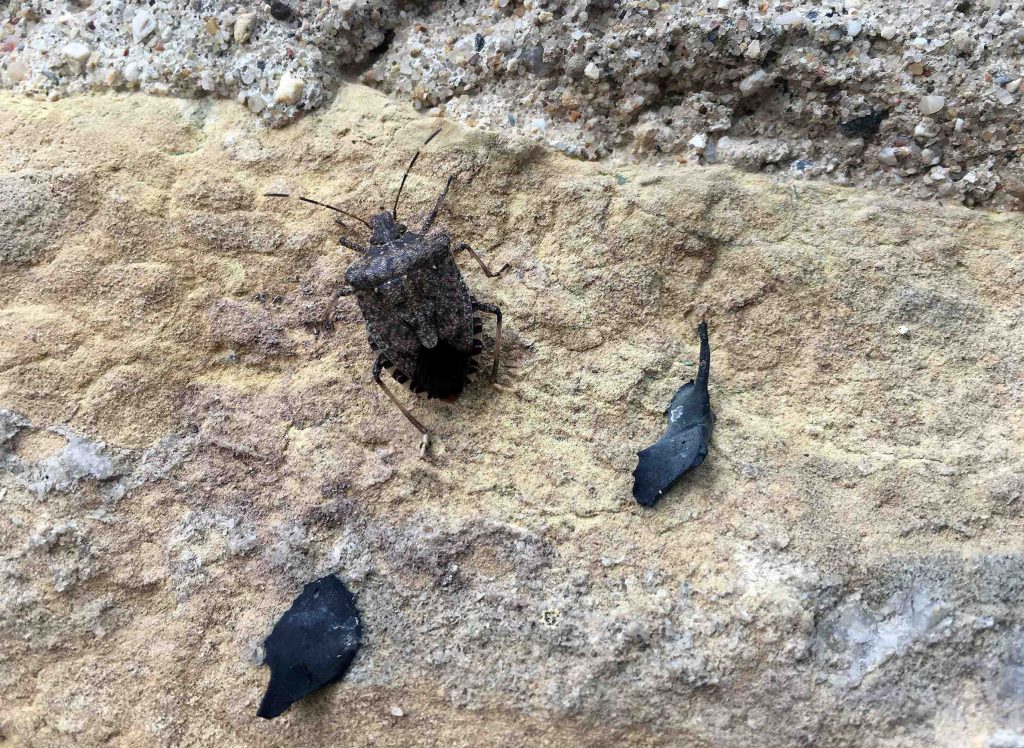 The brown marmorated stink bug, as seen on the wall of a building in Madison, is active across much of the southern portion of Wisconsin. Photo by PJ Liesch.

One of the most concerning invasive insects to appear in Wisconsin in the last decade is the brown marmorated stink bug (Halyomorpha halys). This species native to Asia delivers a double-whammy as a pest. Not only does the species damage crops and other plants during the growing season, but these stink bugs are also a significant nuisance when they sneaks into buildings in the fall. Since its initial detection in the state in 2010, populations of this insect have built up slowly but steadily.

What’s the status of the brown marmorated stink bug around Wisconsin in 2018?

As of late 2018, 27 counties across Wisconsin have confirmed reports of the brown marmorated stink bug and a handful of others have suspected sightings. This insect has a strong foothold in the state and was confirmed in seven new counties in 2018 alone: Eau Claire, Jackson, La Crosse, Marquette, Monroe, Richland and Trempealeau.

Two core areas stand out for brown marmorated stink bug activity in Wisconsin: the Highway 41 corridor from Fond du Lac to Green Bay, and along the southern tier of the state from Dane and Rock counties east to the Milwaukee metro area. These two regions have the longest history of stink bug in the state and account for the majority of reports.

Much of Wisconsin has yet to encounter this insect or truly experience its impacts. When the brown marmorated stink bug is first detected in an area, there’s a proverbial “calm before the storm.” The pattern observed in the state thus far has been a few quiet years where low initial populations of the insect result in only a few sightings annually. However, after a few more years in a given area, stink bug populations build up to the point where nuisance problems around structures are noted and reports of potential plant damage begin to trickle in.

What’s the outlook for the brown marmorated stink bug?

Unfortunately, Wisconsin has yet to experience the full impact of this invasive insect. Observations over the past few years have found that this stink bug is able to survive the state’s winters and reproduce, so this adaptable pest will most likely continue to build its numbers in coming years. 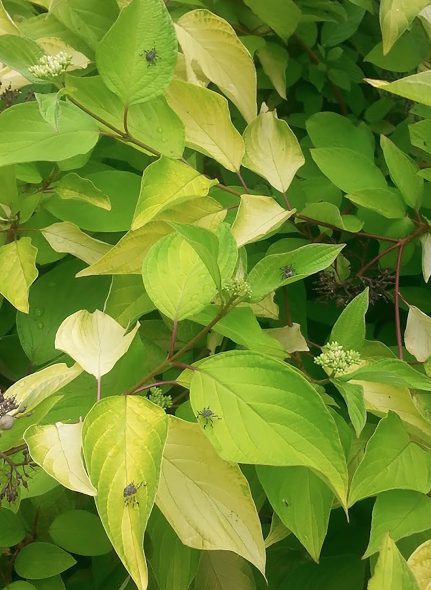 Brown marmorated stink bug nymphs congregate on a dogwood shrub — ornamental trees and shrubs, vegetables, and fruit crops can all be attacked by this insect. Photo by PJ Liesch.

Over time, the brown marmorated stink bug is likely to emerge as one of the top structure-invading pests in the state alongside the likes of boxelder bugs and multicolored Asian lady beetles. In the eastern United States, where this stink bug has been established for over a decade in spots, problems can be significant. In fact, these malodorous insects have been documented invading homes by the tens of thousands.

While widespread crop damage has not yet been observed in Wisconsin as a result of this insect, it may only be a matter of time as its population continues to build. Agricultural problems have also been significant in the eastern U.S., giving a glimpse into what could potentially happen in Wisconsin in coming years. For example, the brown marmorated stink bug caused $37 million dollars in losses to apples in the mid-Atlantic states in 2010 alone.

Having been detected in Portage County in 2017, the brown marmorated stink bug may soon start to pose a threat to vegetable production in central Wisconsin. Similarly, specimens confirmed from Door County in 2017 are forcing fruit growers in that part of the state to keep a close watch on their orchards and vineyards. With the detection of the species in several western Wisconsin counties in 2018, it’s likely that its population will slowly build in that part of the state over the next few years as well

As the brown marmorated stink bug establishes itself around Wisconsin, it’s important to know more about where they are found. Farmers, gardeners, homeowners and just about anybody can learn how to properly identify the species and better understand its biology and management. Wisconsinites can keep an eye out for these stink bugs in their homes and backyards — and reports to the University of Wisconsin-Madison Insect Diagnostic Lab are encouraged from counties where this pest is relatively new or has not yet been found.

Brown Marmorated Stink Bug Strengthens Foothold Across Wisconsin was originally published on WisContext which produced the article in a partnership between Wisconsin Public Radio, Wisconsin Public Television and Cooperative Extension.