By Ximena Conde, Wisconsin Public Radio - Nov 29th, 2018 12:12 pm
Get a daily rundown of the top stories on Urban Milwaukee 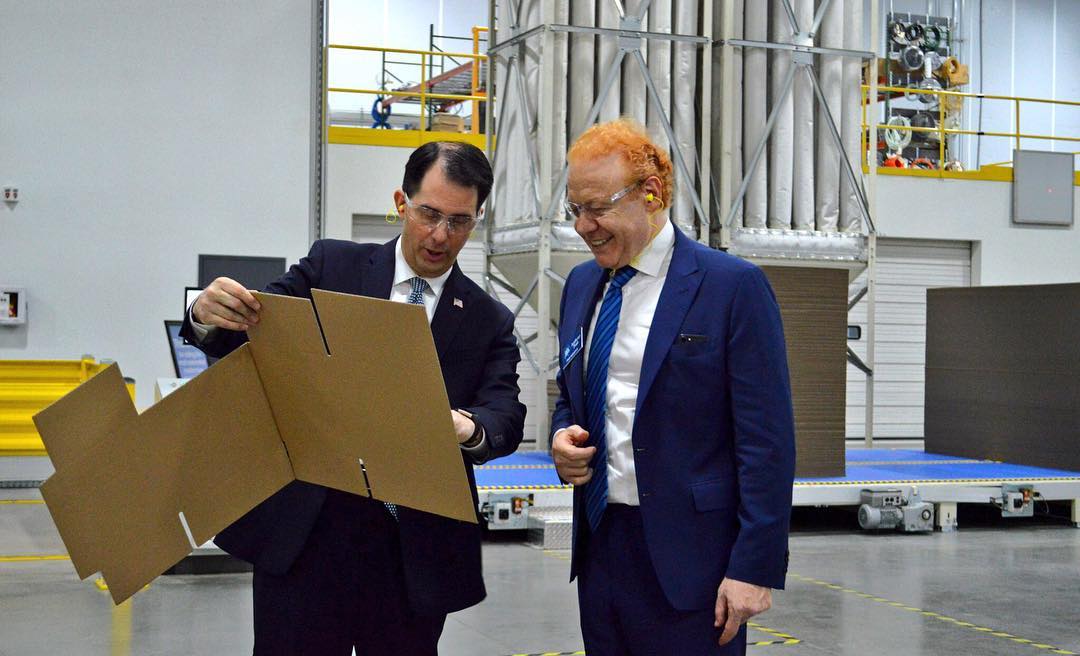 Gov. Walker at Pratt Industries for the ribbon cutting of their new manufacturing facility. In may 2015, the Wisconsin Economic Development Corporation approved a $1.75 million loan and $2.4 million in job tax credits for the project. Photo from the State of Wisconsin.

Based on the most recent data available, the report found the state gave manufacturers more than $928 million in tax exemptions, incentives and other forms of aid in 2016. This is an increase of more than 28 percent from 2008 when adjusting for inflation.

Another thing to keep in mind when talking about these monetary packages is that the manufacturing industry makes up for more than 465,100 jobs in the state.

“It’s just a major, major employer in the state,” said Jason Stein, research director of the Wisconsin Policy Forum. “We have more than 16 percent of our workforce tied up in manufacturing, which is nearly twice the national average and second only to Indiana at the national level.”

According to the report, the industry has also traditionally placed workers with modest levels of education in well-paying jobs across the state.

“The industry is pretty geographically distributed across the state, it’s not just in Milwaukee and Madison,” Stein said. “You see a lot of rural counties as well where a significant part of their workforce is employed by manufacturers.”

Still, the report notes the gap between average manufacturing wages and wages from other industries is closing.

The report also finds the amount of incentives and credits the state gives out to the industry could drastically jump in the future, once other tax incentives come into play. This is due in part to incentives the state is offering Taiwanese tech manufacturer Foxconn, which are estimated to cost more than $2.85 billion.

Currently being debated by state senators is another deal of this sort worth the tune of $70 million over 15 years, this time to help paper products manufacturer Kimberly-Clark Corp. keep one of its facilities near Neenah open.

Tim Bartik, senior economist at the W.E. Upjohn Institute for Employment Research in Michigan, recently wrote a report on how to help communities with a strong manufacturing workforce succeed. He said a lot of these state incentives are often given out indiscriminately and can be wasteful.

“I think it can be an effective strategy if used sparingly and targeted in a number of respects,” Bartik said, adding that often the deals last for too long and have a high cost per job.

Bartik said it’s important to consider the wages manufacturers benefiting from incentives offer and whether they hire locally. He said he finds the problem in the United States is when state and local leaders are tempted by the publicity garnered when a large company makes a large location decision.

“Why do governors and mayors do that? Well because the tax credit you hand out for 10 years now is something your successor will deal with, not you,” he said.

George Bureau, vice president of consulting services for the Wisconsin Manufacturing Extension Partnership, said manufacturing jobs often create additional jobs across the supply chain and he thinks the state’s incentives are good for the economy.

Bureau said manufacturers are often producing for customers outside Wisconsin.

“And by bringing those funds in, whether it be from other states or from other economies outside the United States, again, that’s the engine of economic growth,” Bureau said.