State school report cards since 2014 tell the tale. Are there solutions for MPS?

Last week’s Data Wonk column looked at what could be learned from the most recent state school report cards. In particular, it found a gap between MPS regular schools and Milwaukee charter schools and private schools participating in the choice program.

Has that gap been widening? The next graph shows the results of the last four report cards (none was issued for the 2014-15 schools year). The average Overall Accountability Scores for Milwaukee charter schools are shown in blue. Those for non-charter MPS schools are shown in yellow.

Starting with the 2016-17 school year, private schools that are part of the school choice program have participated. These schools were allowed to choose whether to report results for all their students (shown in red) or just those in choice (in gray). Some reported both ways. 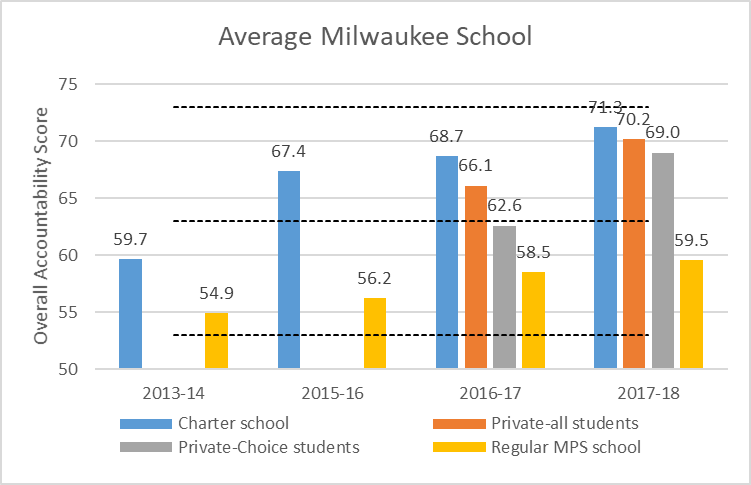 Over this period, average scores in all three categories of schools have improved. However, the average regular MPS school has lagged behind the other two groups, allowing the gap to grow. This is consistent with Alan Borsuk’s conclusion in a recent article that “based on the report cards, the overall separation between MPS and the charter and private schools is more visible now.”

The school report card uses two measures of academic success: achievement and growth. Achievement reflects scores on the state tests. A school whose students get high test scores will rate highly on achievement. Growth is measured using a value-added model that compares student improvement on state standardized assessments to similar students from one year to the next. In schools and districts with a high proportion of high-risk students, student growth is weighted more heavily than student achievement. For example, in MPS achievement contributes 5 percent of the score versus 45 percent for growth. For Whitefish Bay, the weights are 45 percent for achievement and 5 percent for growth. 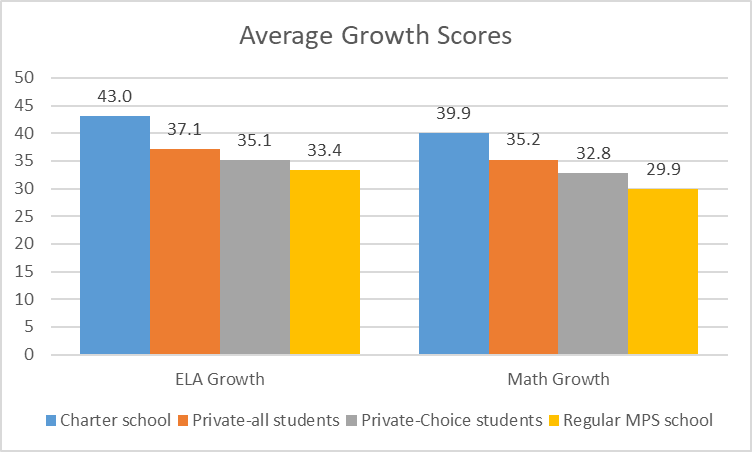 MPS defenders advance several theories as to why MPS cannot be expected to do better.  One theory is that charter and choice schools get rid of their most challenging students by counseling them to withdraw after the third Friday count that is used for calculating state funding. The student then enrolls in an MPS school. I am aware of no evidence supporting this story. If true, this story would be fairly easy to document: just keep a record of students enrolling in late September and October including their previous school.

A more sophisticated critique is that MPS schools face a student population whose challenges are not fully captured by the data used by DPI in its school report card. There is probably some truth to this but, at some point, it becomes an excuse to avoid identifying ways to make MPS more effective.

I would argue that a big factor in MPS’ difficulties reflects a lack of a sense of ownership, of someone who has made a long-term commitment to the success of a program or school. Too often, promising MPS schools and programs are left to wither and die. By contrast, successful charter schools have boards and others who are committed to their success. The same is true, I would guess, of successful private schools.

Here are four examples of where promising MPS schools and programs were allowed to fall apart:

“Instrumentality” charter schools, by contrast, are considered part of MPS. Staff are members of the MPS unions and are MPS employees. A few years ago, there was a flurry of interest in becoming charter schools, motivated in part by the availability of $75,000 government planning grants. Today, only five instrumentality charter schools remain—two (Honey Creek and Whittier) are converted regular schools and three (ALBA, Alliance, and IDEAL) were organized as charters.

The instrumentality charters are the orphans of MPS. It is unclear how their charter status gives them significantly more freedom to innovate compared to regular MPS schools. Today, the five schools report to four regional offices, as shown below. A start would be to have one office, charged with defining what an MPS instrumentality is.

MPS needs to figure out what it wants from so-called “instrumentality” charter schools and identify someone to help them grow and succeed. 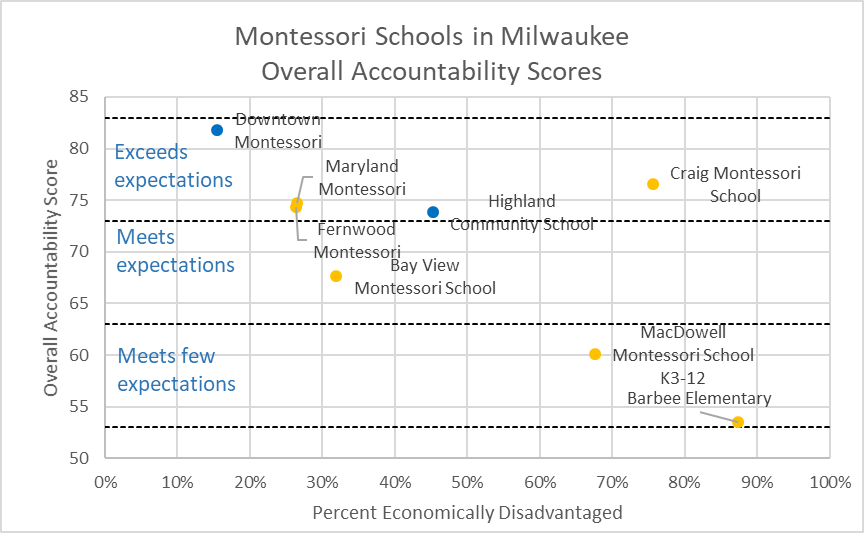 The same chart shows that most of the Milwaukee Montessori schools performed well on the latest DPI report card. Six of the eight are rated as meeting or exceeding expectations.

The next chart shows the combined ELA and math growth scores for the eight Montessori schools. Most were able to meet or exceed the Wisconsin state average growth, shown as a dotted line. 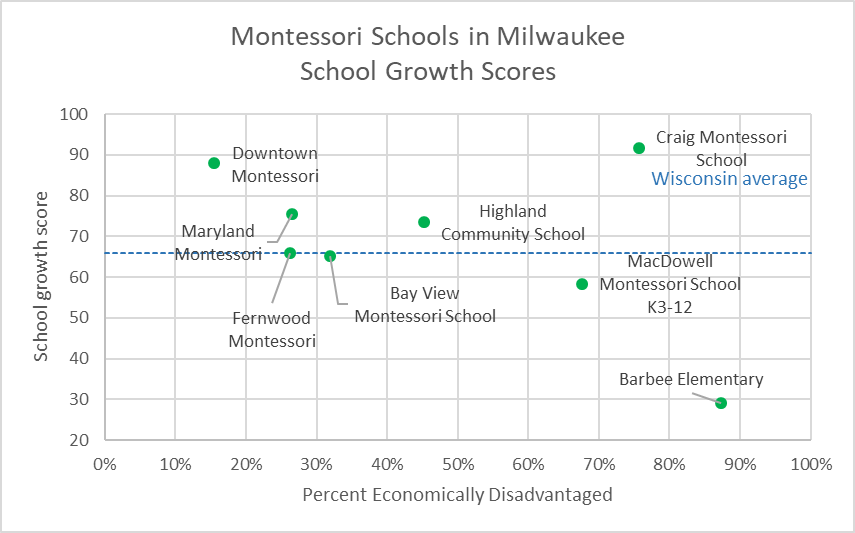 One of the biggest challenges facing Milwaukee Montessori schools is hiring teaching staff and school leadership with Montessori training. This is a particular challenge for MacDowell, which has expanded into high school.

As with instrumentality charter schools, MPS’ administration of Montessori schools is fragmented. No one is charged with developing an overall strategy. The seven MPS Montessori schools report to five regional offices, as shown to the right.

The gap between MPS schools and charter and choice schools is widening. Defenders of MPS need to move past excuses and push for solutions. Expanded and well-supported Montessori schools and instrumentality charter schools could be part of the solution.