By Corri Hess, Wisconsin Public Radio - Nov 23rd, 2018 10:40 am
Get a daily rundown of the top stories on Urban Milwaukee 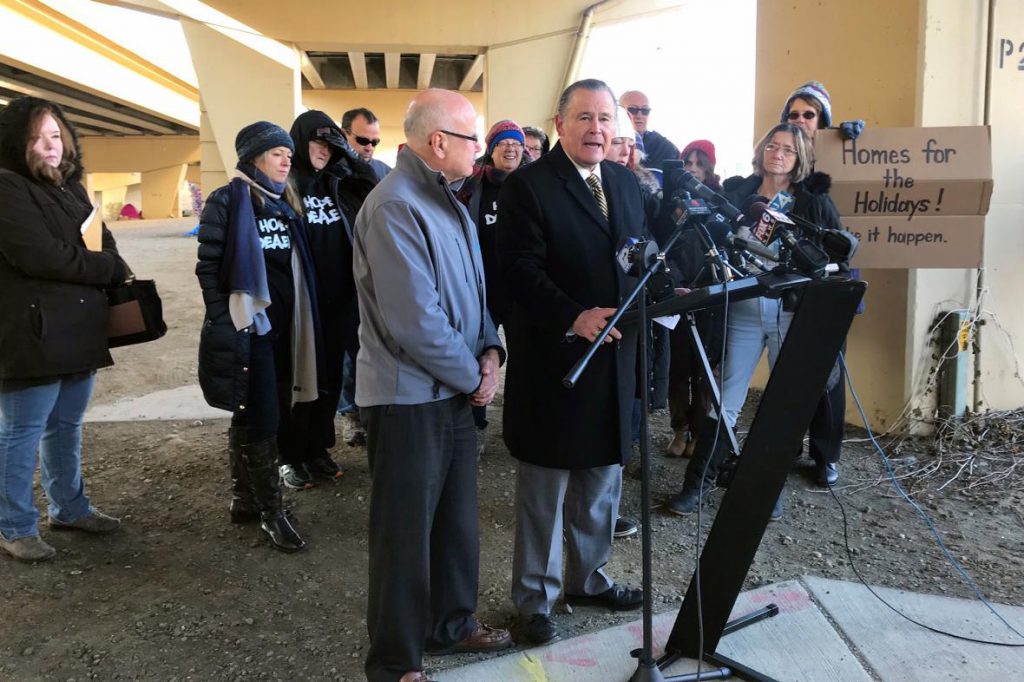 Milwaukee Alderman Bob Donovan, right, speaks to reporters on Tuesday, Nov. 20, 2018, under one of a dozen homeless encampments under the city’s viaducts. Photo by Corri Hess/WPR.

Donovan suggested to a group of reporters that Marquette should re-open the recently closed 155-room Ramada Hotel it owns in downtown Milwaukee to temporarily house people living in tents at about a dozen encampments under city viaducts. On Monday, Donovan sent a letter to Marquette President Michael Lovell saying just that.

“It seems Marquette has no immediate plans for the facility,” Donovan’s letter said. “Please understand this is a hotel that for nearly 50 years paid taxes to the benefit of the entire community. As winter comes, surely for even a few months, the Ramada Inn facility can be used for the common good?”

Marquette filed plans with the city of Milwaukee to demolish the hotel at 633 W. Michigan St. in October. The university has owned the recently closed seven-story hotel since mid-2015.

Marquette is not in a position to use its facilities, vacant or otherwise to house nonresidents and assume the significant, complex responsibilities that come with operating a shelter, said Lynn Sheka, Marquette spokeswoman.

“Marquette is part of a broader Homeless Outreach Team that is working on a coordinated solution to most effectively meet the immediate needs of individuals experiencing homelessness in Milwaukee, and ultimately address the underlying causes of this systemic issue,” Sheka said.

Across Wisconsin, more than 5,000 people are without a home on any given night. Donovan said he believes all of the homeless shelters in Milwaukee are full because of the cold. In Minnesota, the number of homeless people on any one day is closer to 7,700 people, according to the most recent federal data released in January from the U.S. Department of Housing and Urban Development.

Donovan, who was joined by Milwaukee Alderman Mark Borkowski on Tuesday, said the city Public Safety and Health Committee will hold a public hearing on homelessness at 9 a.m. Thursday, Nov. 29. He plans to invite homeless advocates and representatives from the city, Milwaukee County and state representatives.

“My hope is to ascertain precisely where we are at with this problem and what we can do in the short term and the long term to address this ongoing problem,” Donovan said. “I realize this is not an easily solved problem, but we as a community need to do better and we outta do better and if not put an end outta make a huge dent.”

One thought on “Donovan Calls on MU To Help Homeless”