Art Has Never Been Such Fun

MAM exhibit, “Serious Play: Design in Midcentury America” is for the child in all of us. 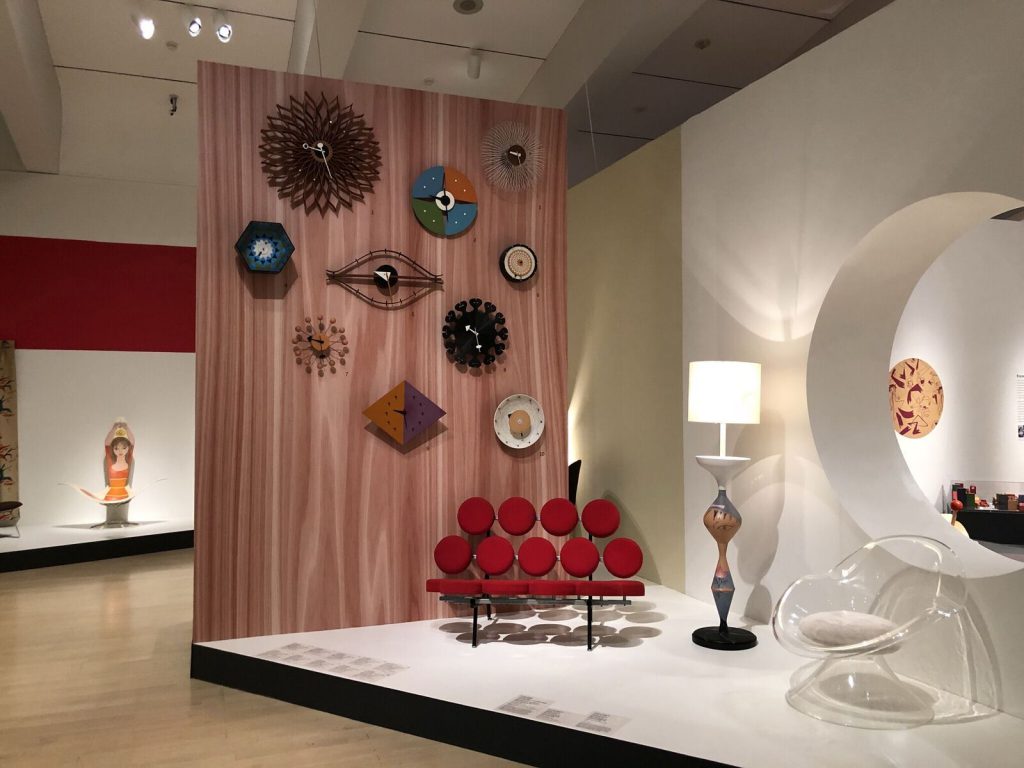 The post-World War II years was a time of prosperity in America, but also of political tensions abroad. The Milwaukee Art Museum’s “Serious Play: Design in Midcentury America” exhibition illustrates the whimsical and imaginative way artists and designers reacted to the country’s widespread unease surrounding the Cold War.

From the marshmallow sofa to clear lucite chairs to futuristic playground structures, innovative designers from a variety of cultural backgrounds incorporated bold colors, minimalism and many different materials into their work.

The exhibit features three areas: domestic, play and corporate approaches. Much of the domestic designs, among them the molded plywood chair designed in 1949 by Ray Komai, and Finnish designer Eero Saarinen’s olive-green Womb Chair, are sturdy and functional, yet stylish. (Saarinen was also the architect who designed Milwaukee’s War Memorial Center.) The designers’ modern, minimalist style is echoed today—one need only to browse online, or shop at IKEA, to see similar furniture designs.

The domestic area’s display of highly stylish midcentury living rooms are imaginative and cartoonish, with bright reds, pinks, greens and royal blues and angular plastic and fiberglass furniture. Laverne’s transparent lucite Jonquil chair in particular brought the 1960’s cartoon “The Jetsons” to mind. The area also showcases ingeniously-designed clocks with no numbers, among them Irving Harper’s sunflower and compass.

Advertisements for and items made by the Aluminum Company of America (ALCOA) illustrate the versatility of the metal. From an accordion-style camping table to a blanket woven with wool, nylon and aluminum thread, the material seemed to have had numerous uses. Founded in Pittsburgh in 1888, the company remains in business today.

Although midcentury American designs were often futuristic, some artists preferred to fuse the modern with traditional folk art.

Hungarian-born industrial designer Zeisel (who died at the ripe old age of 105 in 2011) incorporated Eastern European-inspired blue floral designs in her gorgeous ceramic dishware. Zeisel also had a fondness for birds, evidenced by her bird-shaped gravy ladle, salt-and-pepper set, and oil pourer.

Alexander Girard, designer for furniture company Herman Miller, Inc. was also an avid folk-art collector. Much of his work, including textiles, was inspired by folk art from around the world and his travels to Mexico, India and Peru. Several objects from his travels—a black ceramic horse made by Mexican artist Heron Martinez de Mendoza, a ceremonial 19th century bronze bull, and Zapotec artist Teodora Blanco’s ceramic Female Figure, are displayed.

Folk art influences—blue and red chickens, basic and colorful geometric shapes–can also be found in artist Paul Rand’s lithographs. Rand was a designer of many posters and cigar ads.

The “play” portion of the exhibit is delightful and interactive. Photos, blueprints and models of Isamu Noguchi’s ultra-modern playground structures, which were mostly built in Japan (although one was built in Atlanta, Georgia), and colored blueprints of Douglas and Maggie Bayliss capture the innovation of the era. A bright red Noguchi sculpture sits right near the museum’s desk, and patrons are allowed to sit on it and take selfies.

Eames’ fanciful home movies, including a film of a toy parade (complete with a makeshift curb on which to watch the puppets and other toys go by) and a film on trains, split up into eight small screens, have an exuberance that may appeal to the childlike curiosity of visitors. The toy room features items in Eames’ personal collection, among them a metal train and a 1910 Bungalow Box building set complete with colorful diagrams.

The Serious Play exhibit focuses on toys that might inspire future engineers, including displays of Magnet Monster and Tinker Toys sets.

The play area, where youngsters can build Anne Tyng designs such as a hobby horse and chair and spin wooden, metal and plastic tops, provides fun hands-on activities for children who may otherwise be bored visiting an art museum.

When visitors reach the end of the exhibit, they can shop at the pop-up store, which sells gifts of yesteryear, including kids’ toys (Slinkies, jacks and dominoes), art and architecture books, tote bags, wall clocks, calendars and salt-and-pepper shakers.

This is truly an exhibit for all ages, providing a welcome respite from the negativity surrounding today’s politics, social media, and the pressures of daily life. The imaginative designs of mid-century America continue to uplift people today. 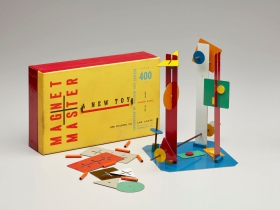 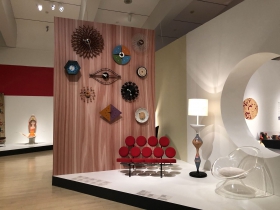 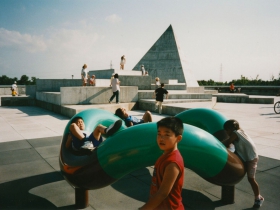 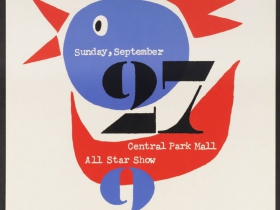 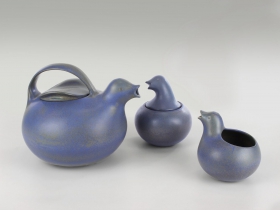