By Ryeshia Farmer, Milwaukee Neighborhood News Service - Nov 8th, 2018 11:37 am
Get a daily rundown of the top stories on Urban Milwaukee 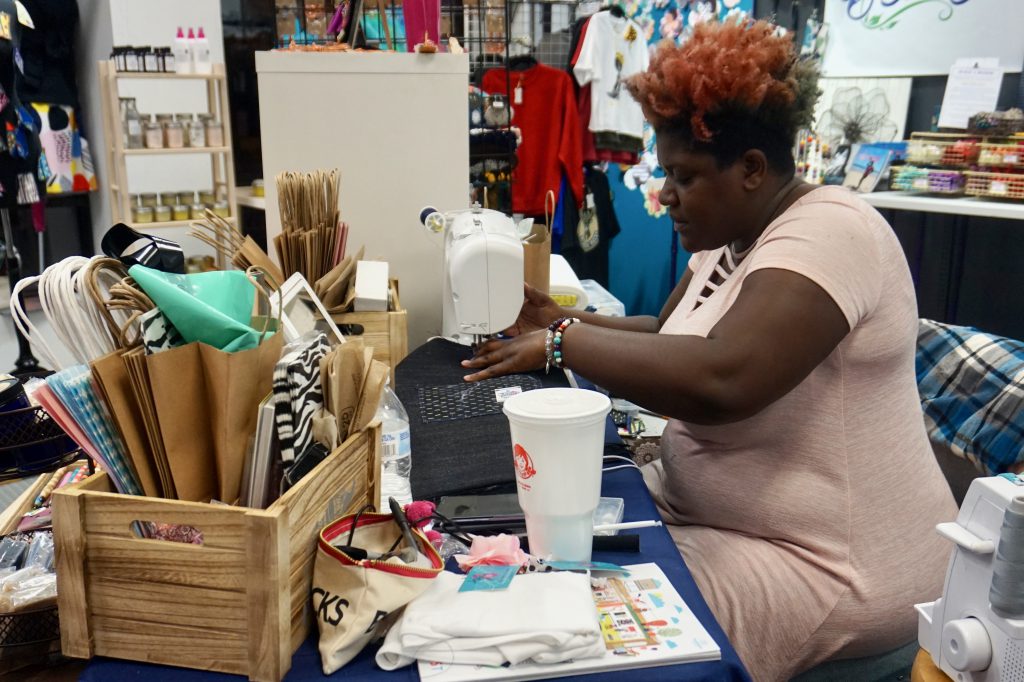 Tiffany Miller sells floral and other accessories at The Bronzeville Collective MKE. Photo by Ryeshia Farmer/NNS.

As part of an initiative that provides entrepreneurship opportunities to local businesses, Tiffany Miller and Tomira White shared free retail space in a Harambee pop-up shop for a month beginning on Aug. 19. Miller said that as their time in the shop was ending, she and White inquired about how they could extend it.

“We wanted to stay, so we asked, ‘how can we make that happen?’ Then one conversation led to another, and…it was a fairly quick and easy process to [lease] the space,” Miller said.

Miller and White now hold a month-to-month lease along with business owners Lilo Allen and Jasmine Barmore. The four women and their businesses make up the Bronzeville Collective MKE, former home of Pop-Up MKE at 339 W. North Ave.

“That lease came together because I popped in one day, and Tomira asked about how to go further, so I called the landlord and they took it from there,” according to Beth Haskovec, commercial revitalization program officer at LISC Milwaukee.

Miller and White’s location is in Bronzeville, an emerging cultural and entertainment district on the North Side. Bronzeville encompasses the area between Garfield Avenue and Center Street, and between Dr. Martin Luther King Drive and Seventh Street in Ald. Milele Coggs’ Sixth Aldermanic District. It was inspired by Milwaukee’s original Bronzeville, which was located on Walnut Street and was an economic capital for black business owners.

According to Barmore, the Bronzeville location can hold between four and 10 businesses at a time. Miller said that creatives as young as 10 years of age currently work out of the shop. Members of the Bronzeville Collective MKE are the first business owners to lease Pop-Up MKE space. 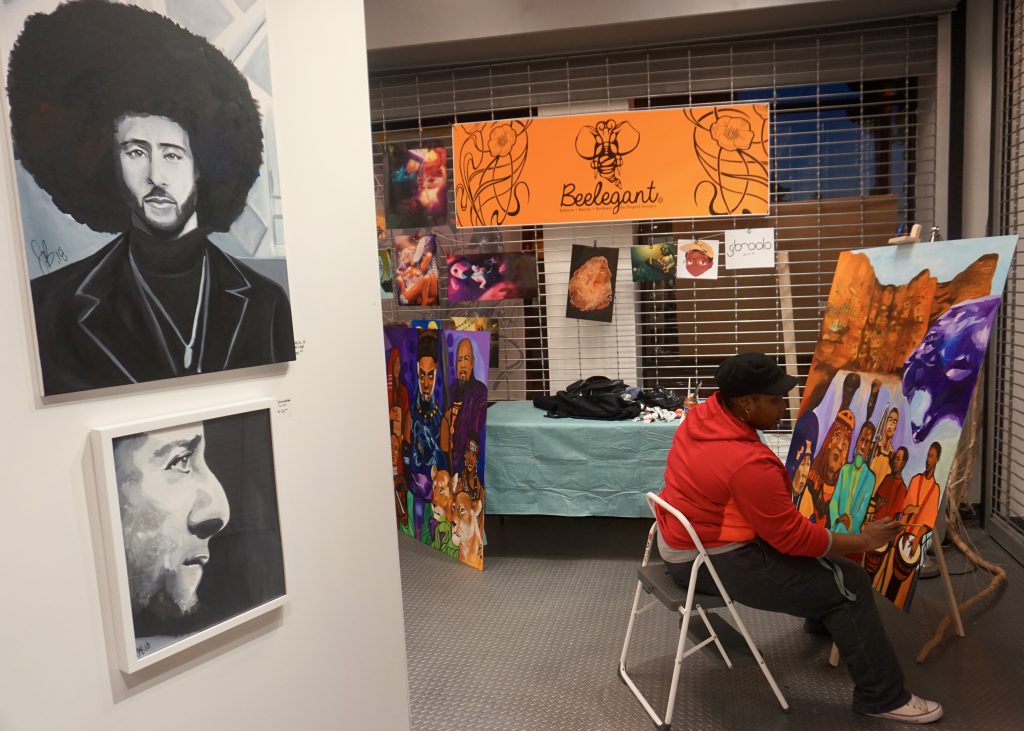 White’s business, “Distinctive Designs by Tomira,” sells hand-crafted outerwear, including sunglasses, jewelry and scarves. It has an online boutique in addition to its location at Pop-Up MKE.

Lilo Allen owns “Papyrus and Charms,” which offers Jamaican and African-American-influenced jewelry and other handcrafted goods. Allen has occupied space at Pop-Up MKE with Miller since mid-August, but her home studio is located near the Midtown Shopping Center in Capitol Heights.

Barmore owns “JBeelegant,” which offers original artwork. She also has an online graphic arts business that specializes in pillows and home decor and hosts a creative arts studio that offers artists opportunities to learn and collaborate.

“It makes sense and is much more manageable to collaborate and build with other people, especially other black women,” Miller said. Visibility, regular interactions with customers, split rent and the opportunity to establish the collective for black and brown business owners in Bronzeville added to the group’s decision to remain in the space.

The collective is open for business from 1-7 p.m. Wednesday through Friday, from 11 a.m. to 5 p.m. on Saturday and from 12-5 p.m. on Sunday. It also has openings by appointment on Monday and Tuesday. The four members of the collective take shifts in the shop during these hours.

“Being trusted by other black women to create a space in which they can profit speaks volumes to our mission: ‘Collaboration works,’” Miller said.

She added that the collective’s members support each other like family and see each other as partners rather than competitors.

“Lilo and I share a vision to work with and have a home for black and brown creatives in which they can grow and sell their art and creations,” Miller said.

“If you partner up with other business owners, it might make more sense for you financially,” Allen said.

In addition to the collective’s products, soaps and oils, jewels and charms, and attire made by Jamila Carney, Ruth Fluker, Venice Williams and others continue to be sold in the shop through the Pop-Up MKE initiative.

“We love the space and we will continue to cultivate the space. We’re all sustainable and growing businesses and we’ll work toward permanency,” Miller said.

“That level of sustainability for the businesses was always a part of the vision,” Haskovec said. “We wanted to learn from business owners, give them a space to learn from each other, and take opportunities, wherever possible, to talk further talk about sustainability.”