So why doesn’t the school board embrace them? 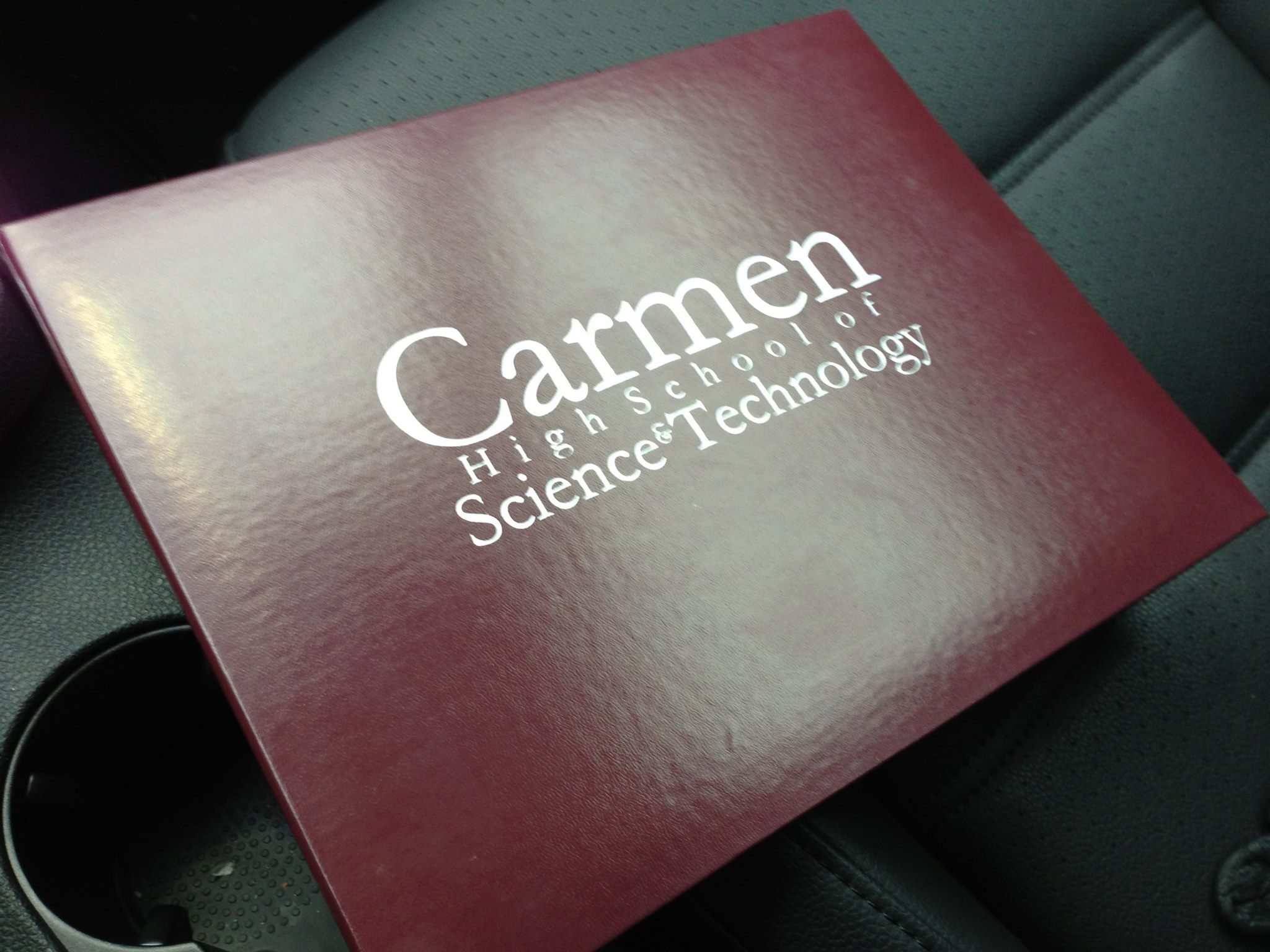 If there is a single theme underlying the Data Wonk columns, it is the war between evidence and ideology. Too often, when the two collide, it is the evidence that loses.

The recent election campaigns have offered examples of ideology driving out contrary evidence from the right-wing, including denial of global warming, the supply side assumptions that reducing taxes on rich people and eliminating regulations are the key to prosperity, and the drumbeat that immigrants are a threat. Not all examples, however, arise from the right.

Some are bipartisan, such as the hysteria in some communities about the side effects of vaccinations. And in education, both sides beat up possible reforms that run afoul of their chosen ideology. The Common Core is an example of where both sides have put in their licks. Much of the original support came from large employers concerned about the education levels of their hires. The Common Core first ran into opposition from the most leftward part of the education establishment intent on preserving mushy curricula. Then the Tea Party discovered it was a plot by the federal government to take over education.

Suddenly conservative politicians had to respond to this threat. In Wisconsin, Governor Scott Walker announced that the Common Core would be replaced by a Wisconsin-developed curriculum. Now that the Tea Party has turned its attention elsewhere Wisconsin continues to follow the Common Core.

Several years ago, I was appointed to Milwaukee Public Schools’ Charter School Review Committee. When charter schools were proposed either by MPS teachers or outside groups, the proposal was first reviewed by this committee. The proposals were then forwarded, along with the committee’s recommendation, to the school board, which could approve, reject, or send back it back for more work.

MPS is one of three agencies that have authorized charter schools in Milwaukee. The other two are the Milwaukee Common Council and UW-Milwaukee.

As an authorizer, a major competitive advantage for MPS is its control of empty school buildings which can be offered to charter schools. So far, MPS has succeeding in keeping its empty buildings out of the hands of schools it has not authorized.

In exchange, the enrollment in charter schools authorized by MPS is included in its student count, which is used to calculate MPS funding. Since the resulting funding exceeds charter school payments, MPS’ overall budget benefits from a large number of students in MPS-authorized charter schools.

It should be mentioned that MPS has two types of charter schools: “noninstrumentality” charter schools are organized outside of MPS. They have their own board of directors and hire their own staff. Theoretically, at least, MPS has no day-to-day involvement in their operation; rather, it evaluates their results periodically to decide whether to renew their contract.

“Instrumentality” charters, on the other hand, remain MPS schools. Most noticeably, their teachers are members of the Milwaukee Teachers’ Education Association. Theoretically these schools are relieved from some regulations. Neither the MPS administration nor the union has viewed them as a major tool for innovation, however, and their numbers have declined.

About three years ago, the Charter School Review Committee reviewed a proposal to establish the Milwaukee Excellence Charter School. It gained the unanimous support of the community members of the committee but was opposed by its two members from the school board.

The reasons for the opposition were never clear to me. Opponents seemed to regard the proposed Milwaukee Excellence as an example of a so-called “no excuses” school about which they had heard bad things. Lurking in the background was opposition from the MTEA, which can be counted on to oppose any charter school, as a threat to its membership.

Despite support from the review committee and the superintendent, the school board rejected the proposal. Several months later, however, a somewhat modified proposal returned and was narrowly approved. 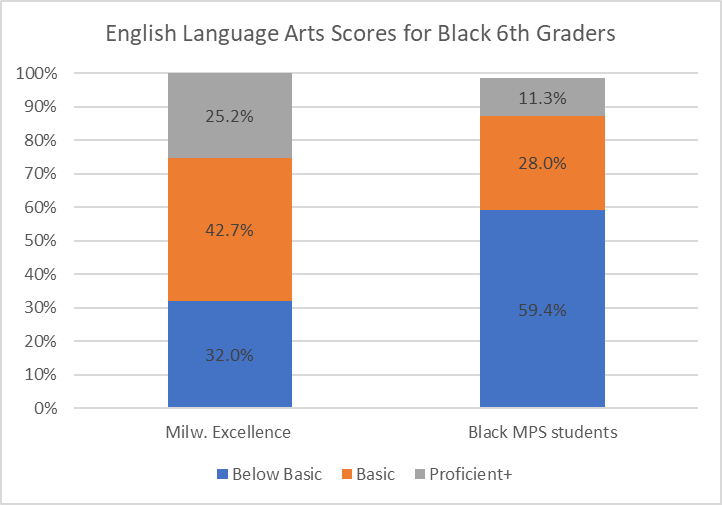 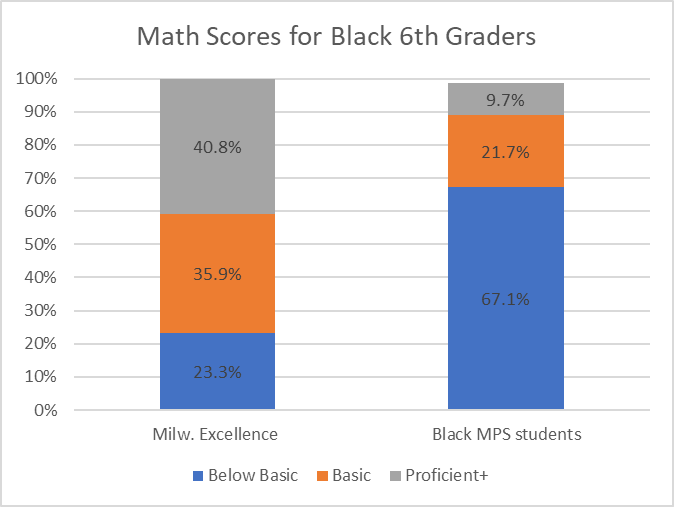 Is this result an anomaly—or does it reflect a broader difference between charter schools and regular public schools? Aside from Milwaukee Excellence, six charter schools enroll sufficient black 6th graders to have statistics published on their results on the Forward exam: Central City Cyberschool, Carmen’s new northwest campus, Milwaukee College Prep’s north campus, the Milwaukee Academy of Science, and two Woodlands’ campuses. Other charter schools also enroll black students, but not in sufficient numbers to report results while respecting privacy.

The next chart shows the breakdown of scores for black students at these seven schools for their English Language Arts results. 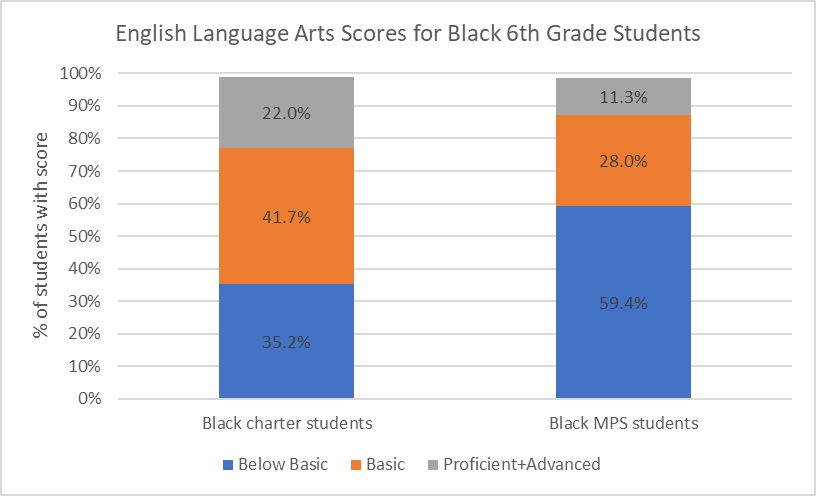 The last chart shows the distribution of math results for black students at these seven schools. 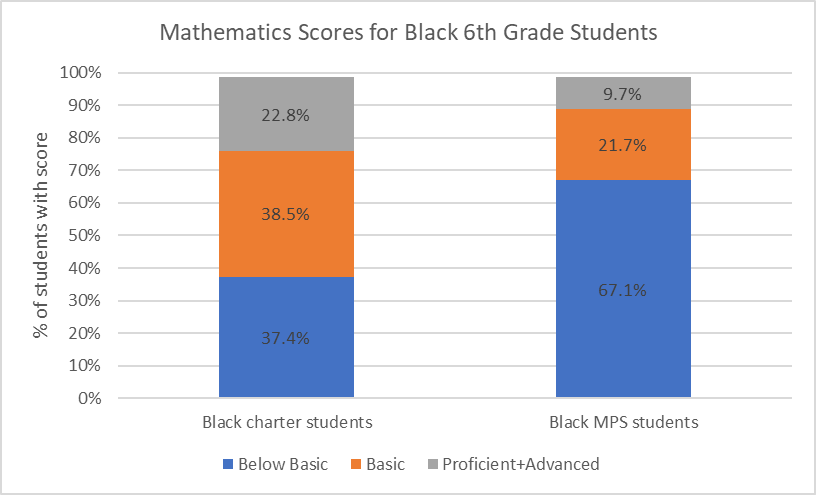 Quite a difference. The seven charter schools have double the percentage of students scoring proficient or above as MPS in both mathematics and English Language Arts.

While the consistency of results among the charter schools surprised me, studies of results in other cities have generally—but not always—found that minority and low-income students as a group fare better in charter schools than regular schools. There are several possible explanations for this phenomenon.

One is the effect of having management that is focused on the particular group of students rather than trying to follow policies aimed at an “average” student. One of the two school board members summarized her argument against Milwaukee Excellence as “I wouldn’t send my child there.” That dismisses the possibility that other parents, with other children, might see that schools as fitting their child’s needs.

Opposition by the union to charter schools is easy to understand, but in my view short-sighted. Instead of trying to force students to enroll in schools staffed by union members, the union would be better advised to figure out what the charter schools offer and work to offer MPS schools that meet the same needs. Neither the union nor the administration has exploited the opportunities offered by instrumentality charters that were offered true freedom.

Education in Milwaukee is stuck. Until there is a determination to get unstuck, and to embrace evidence over ideology, it is likely that families most dependent on MPS will pay the price.