Tour guide Adam Carr took us on a wonderful sample of the city's lesser-known delights.

As Halloween and Day of the Dead came to a close and Autumn leaves blew toward oblivion, the Milwaukee Tour for Milwaukeeans gave Milwaukee citizens an exploration of life, death and rebirth in Milwaukee.

The tour, presented by NEWaukee and Urban Milwaukee and hosted by Milwaukee storyteller Adam Carr, took us through five different locations around the city.

Our first stop was the Pabst Milwaukee Brewery & Taproom at 1037 W. Juneau Ave. Guests could head into the Taproom for a drink but we opted to take Carr’s suggestion of heading up to the nearby parking structure for one of the best views of Milwaukee you can get.

The brewing giant once held a 28-building campus on the northwest side of Downtown Milwaukee, according to an Urban Milwaukee story. But then in 1996, under new management, Pabst closed their entire Milwaukee brewery leaving hundreds unemployed and a black hole at the edge of Downtown. Today the brewing complex is reborn as a thriving neighborhood known as The Brewery complete with a new microbrewery and taproom which opened last year.

Our next stop was the Walker’s Point Center for the Arts, where Executive Director Marcela Garcia shared the gallery’s Dia de los Muertos exhibiton. She said that the gallery boasts the longest running celebration of Dia de los Muertos in Milwaukee, now celebrating its 26th year. The halls of the gallery were lined with altares, or altars, along with sculptures and paintings by community members. The United Latinos Club of Milwaukee School of Languages dedicated their altares to the people who died in immigration detention. All the petals surrounding the altares contained the name and date of death of a person who died in detention according to the American Civil Liberties Union. More people have died in immigration detention in 2017 than in other years since 2009, according to the ACLU. Another altares by Vietnam Veteran George Banda from the GI Forum and Esperanza Gutierrez was made in honor of Latino veterans from Wisconsin. The items offered on the altares included a jacket from Vietnam, a scarf from Afghanistan and a hat from the Korean War.

Garcia told Urban Milwaukee that the gallery is a “tool to engage communities and art” as an “intersection of living culture and traditions.”

The tour then took us to the Silver City neighborhood to visit a thriving building at 3600 W. Pierce St. The building was “presumed dead” as it was believed that nobody would want to establish a business there. That was until Ricky Castillo found the building. He and his business partner spent years looking for an office space for their real estate business, Finca Realty, before they found the building in 2014. They purchased it immediately as it was just $69,000, very cheap for a building of its size. They spent the next four years fixing up the building. The massive machines left over from when the building was a steel spraying facility took three months to dismantle and remove. There’s still plenty of work left to do, but now the building is filled with a variety of tenants, including Roll Train, a roller skating aerobics group, Playworks, a nonprofit organization specializing in events to get kids active, and Golf Shoe Music, a recording studio and record label.

We then made our way to Alice’s Garden at 2136 N. 21st St., where gardener Zakiya Courtney told the long story of the garden while tour goers sampled appetizers from the nearby Tandem. The Wisconsin Underground Railroad ran through the location that would eventually become the garden, with fugitive slave Caroline Quarlls being the first to use it when she fled to the freedom of Canada in 1842. In 1948, the Park East Freeway was conceived. Between then and 1971, homes along the Underground Railroad route were demolished until the freeway was cancelled due to opposition from community groups. The garden was established in 1972. In 2001, after the death of Alice Meade-Taylor, former executive director of Milwaukee County Extension and advocate for urban community programs in Milwaukee, the garden was renamed in her honor.  Venice Williams, who would become the garden’s executive director in 2014, began Seedfolk Youth Ministries in 2004 to work towards expanding activities and events in the garden. The garden was revitalized beginning in 2005 thanks to fundraising from the Center for Resilient Cities through the Johnsons Park Initiative. Today the garden offers regular community activities from yoga to performance showcases as well as renting out garden spaces.

Courtney said that the garden represents what America needs to be, sustainable and multicultural. She said you can tell the ethnic heritage of a gardener just by looking at what they’re growing, pointing to a garden plot belonging to a Hmong gardener filled with bright red and orange peppers. Currently they’re preparing for the winter so that the garden can regrow in the spring.

The tour came to a close right where it started, at a Native Burial Mound in Lake Park. But before we left, James Flores, scholarship coordinator at the Forest County Potawatomi Foundation, UW-Milwaukee graduate student and member of the Oneida Nation, gave us a traditional Native American dance in front of the burial mound. His dance is known as a “Sneak Up” dance, depicting Native Americans tracking prey or an enemy. Wisconsin once contained about 20,000 burial mounds, but only 4,000 remain according to Travel Wisconsin. However, protections for burial mounds were established beginning in 1985, according to the Wisconsin Historical Society.

Carr said that Milwaukee isn’t always good at telling its own story. “Basic knowledge is not always common knowledge,” he said.

That’s why it’s great to have fun tours like this. 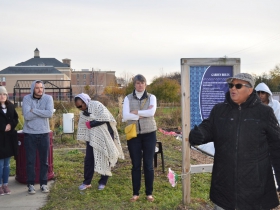 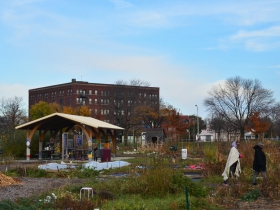 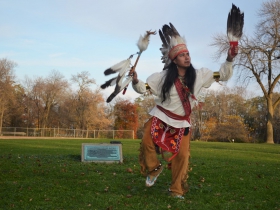 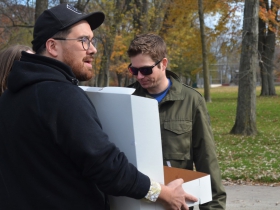 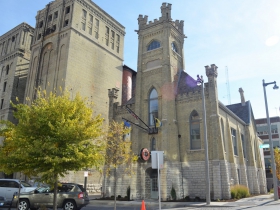 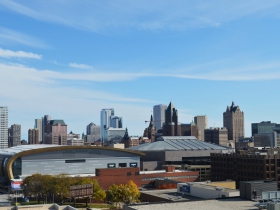 One thought on “Photo Gallery: Milwaukee Tour for Milwaukeeans”