Artist Mark Mulhern’s vibrantly colored paintings portray a world of parties, none of them political. 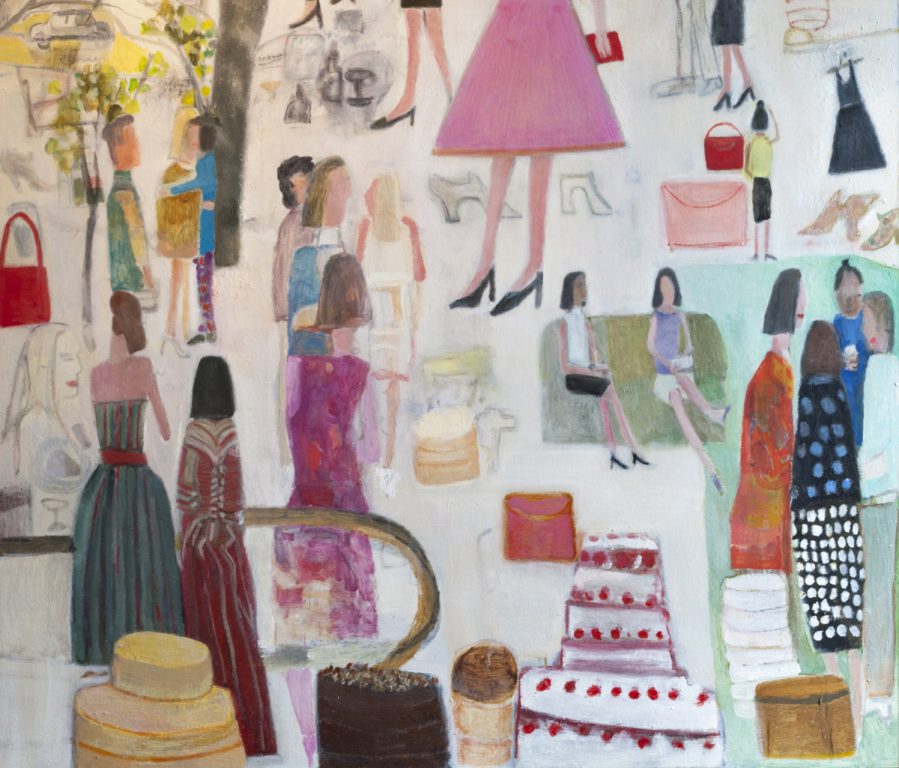 The impact colors have on the psyche has been well-documented. Different colors can evoke emotions and affect moods: Reds incite excitement (and appetite, which is why many restaurants are painted that color); greens convey peace and tranquility; certain shades of blue are calming and invite introspection.

Artist Mark Mulhern uses a wide and vibrant color palate to move his audience and enliven his paintings in his latest exhibit, “Mostly People,” on display through November 24 at the Tory Folliard Gallery in the Third Ward.

From fiery reds to cool blues to sunny yellows to warm beige tones, it seems that nearly every hue of the spectrum is represented in the artist’s nearly two dozen works, which mainly consist of large-canvas oil paintings on linen, with two smaller watercolors and several monotypes and charcoal and pastel drawings.

The artist focuses largely on social gatherings, mainly weddings and cocktail parties, and preparations for these events. Figures of diverse ethnic backgrounds sip drinks at parties, dance at weddings and lounge around a pool.

“It’s a universal theme. Everyone has these in their life—high points,” says Mulhern.

These chronicles of celebration instantly put the observer in a cheery mood. It’s clear the artist is enthralled with the look of such ceremonies. Party favors and items—decadent tiered cakes, balloons, confetti and other festive touches—appear frequently in these paintings. People, mainly women, are often dressed impeccably in 1950s and 1960s styles (in the painting Cocktail Party, one woman is wearing a crimson and gold medieval-style gown). These figures wear glamorous strapless dresses and high heels, and accessorize smartly, carrying handbags that match their outfits.

Visitors to the exhibit are greeted by the vivid October Gathering (oil on linen, 78” x 90) a painting depicting guests at an autumn outdoor wedding (inspired by the wedding of Mulhern’s son) complete with several pumpkins on the table. Layers of green mingle with vermillion, orange and golden hues of fall.

“There’s so much energy in colors. There’s a desire to make something very harmonious,” says Mulhern, who cities French rococo artist Jean-Antoine Watteau (in particular, Watteau’s 1718 painting The Embarkation for Cythera, which depicts a group of upper-class men and women at a grand party on the island of Cythera) among his artistic influences. The artist likened the Rococo period, an art movement which focused on beauty and opulence and which led up to the French Revolution, to today’s social climate. Social events and shopping (retail therapy?) help detract from harsh political realities.

“If you have to live in your paintings, you want them to be harmonious,” adds the artist. Mulhern notes that he works mainly from “imagination and sketchbooks” rather than photographs, drawings or paintings. Indeed, there is a dreamy and collage-like nature to his paintings.

Mulhern received a BFA from the old Layton School of Art in 1973. From 1976-77, he studied in Paris with English surrealist and abstract expressionist painter and printmaker Stanley William Hayter. In 1978, Mulhern earned an MFA from the UW-Madison.

The artist has travelled often to France, and he admires the country’s appreciation of beauty and leisure. The French influence is reflected in works like Brocante (60” x 70”, oil on linen), a summery scene of shoppers at an outdoor market, Green Table (oil on linen, 60” x70”), a languid pool party, and Topiary (charcoal and pastel on paper, 42” x 60”), a collection of spheres and triangles representing the country’s public gardens.

Mulhern, who said he appreciates the “design elements” of the topiary, utilizes basic circles and triangles in a number of his paintings. For example, in Rehearsal in Las Meninas (oil on canvas, 60” x 54”), the young woman in the painting wears a dress with a skirt made entirely out of triangles, with a number of trees of the same shape set in the distance.

Mulhern is a keen observer of body language. Figures are distanced, with their backs turned. They place hands on hips, clutch their purses, and grip their glasses. The artist paints faces that are mainly featureless, one exception to this being Woman in a Blue Field, a painting in which a lone woman, with a cocktail glass in hand, stands amidst an ocean of blue. The blue may well represent sadness and isolation from society—feeling “alone in a crowd.”

Still, the good times certainly outweigh the bad in Mulhern’s work, and the colors are so vibrant that their vibrations linger. 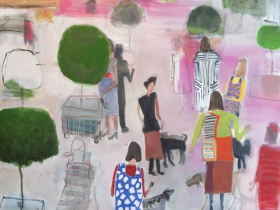 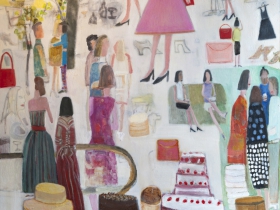 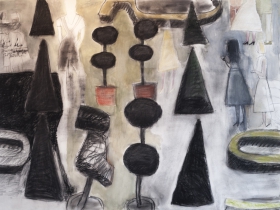 Mark Mulhern, “Mostly People,” on display through November 24 at the Tory Folliard Gallery.

One thought on “Visual Art: Let the Celebrations Continue”