The Big Trumpet of Chris Botti

One of the world’s best-selling instrumentalists, Botti wows them at the Pabst. 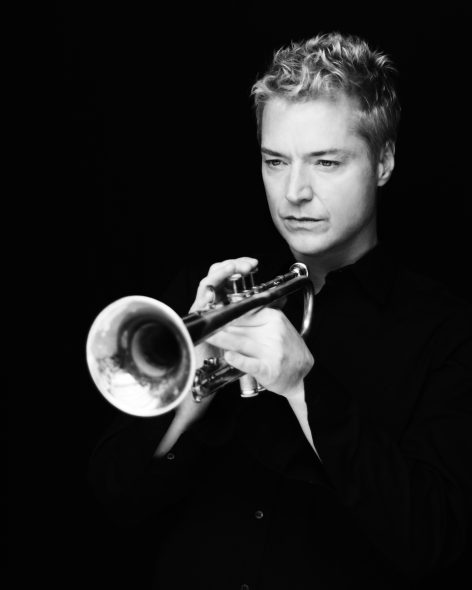 In the 23 years since he recorded his debut album First Wish, trumpeter Chris Botti has become one of the best-selling instrumentalists in the world, his record sales exceeding four million.

Known for his lush, elegant sound, Botti has since released nine albums, among them 2004’s popular When I Fall in Love, 2007’s Italia, two live recordings and a Christmas album. To date, the jazz musician has collaborated with numerous pop, folk and rock artists, including Lady Gaga, Steven Tyler, Joni Mitchell, Tony Bennett, Paul Simon and Josh Groban.

At 55, Botti maintains an impressive tour schedule, sometimes on the road as much as ten months out of the year. On Sunday night, the trumpeter, dapper in a black suit and red tie, performed at the Pabst Theater with his four-piece band, tenor Jonathan Johnson, R & B singer Sy Smith, and cellist Tina Guo.

Despite the many empty seats (the show’s timing wasn’t ideal, held the weekend before Halloween and the same night as the Fleetwood Mac concert at the Fiserv Forum), the crowd, which consisted of mostly ages 50 and up, and a few teens and young adults with their parents, more than made up for the lack of attendance with their enthusiasm, wildly cheering on Botti and his band.

The trumpeter expressed to the audience how happy he was to be in Milwaukee on a Sunday night (“I’m sure I don’t need to ask if there’s a bar in this fine establishment,” he quipped) and requested a “goblet from the Roman Empire” filled with wine, perhaps a reference to the Pabst Theater’s opulent décor.

Botti’s versatile trumpet playing ran the gamut from mellow and romantic to frenetic.

The show was full of surprises, from Botti’s hit “Venice” to jazz standards, including Davis’ “Blue in Green” and Great American Songbook numbers like “You Don’t Know What Love Is.” A fiery rendition of Led Zeppelin’s “Kashmir,” complete with Guo’s blistering electric cello solo, kept the crowd captivated.

All musicians were given ample opportunity to shine, and they did, from Djangirov’s brilliant improvisational work on a Bach fugue and Dusty Springfield’s “The Look of Love” to Amuedo’s soulful guitar playing during a cover of Leonard Cohen’s “Hallelujah.” Pearson and Hamilton shone as the band’s rhythm section, both playing their instruments with passion and ease, Pearson’s drumming and cymbal crashing reaching a fever pitch at several points in the show (after one number, he tossed his sticks in the air behind him).

Botti, who has recorded a handful of songs with renowned Italian singer Andrea Bocelli, jokingly lamented that the singer could not join him on stage that evening. Tenor and Macon, Georgia native Jonathan Johnson filled Bocelli’s shoes nicely when he performed the singer and Botti’s “Italia” and “Per Te,” filling the theater with his rich voice.

Smith exhibited her gorgeous vocals on an up-tempo rendition of Al Green’s “Let’s Stay Together,” inspiring the crowd to clap and wave their hands in the air.

Near the end of the show, Botti imparted a bit of sage advice to younger musicians, stressing the importance of working well with other performers.

“Your number one currency is respect for other musicians,” said the trumpeter.