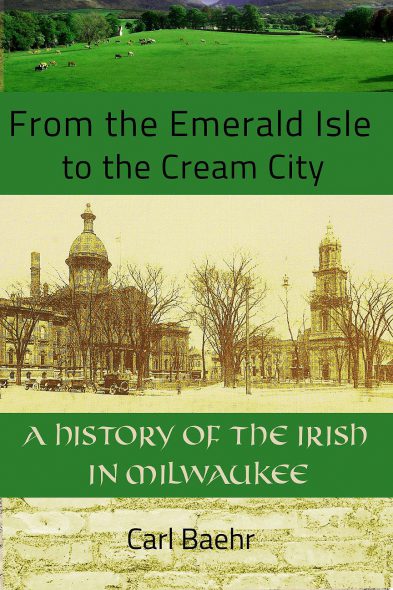 From the Emerald Isle to the Cream City by Carl Baehr

Author and historian Carl Baehr will officially release his new book, From the Emerald Isle to the Cream City: A History of the Irish in Milwaukee, at an event held November 13th at the Milwaukee County Historical Society.

The book describes how the Irish influenced the political, educational, religious and sports landscape of Milwaukee and their impact on other ethnic groups, overcoming early poverty and bigotry to help make Milwaukee the city that it is today.

The event, the first to celebrate the launch of the book, will include a reading and presentation by Baehr and a book signing.

Jointly hosted by Urban Milwaukee and the Milwaukee County Historical Society, the event will begin at 6:00 p.m.

Copies of the book, published by Everything Goes Media, will be available for sale at the event for $19.95.

Baehr’s name is a familiar one to Urban Milwaukee readers. He writes the popular City Streets column, and in 1994 published Milwaukee Streets: The Stories Behind Their Names.

The event is free to attend, but an RSVP is requested.