Why I Had To Tell This Story

Co-author of new theater-dance work was inspired by seeing a show of outsider art. 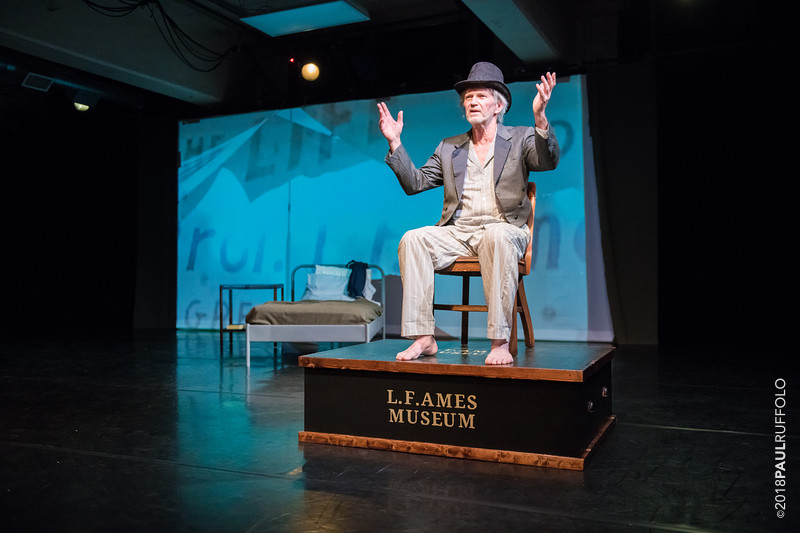 Against the Grain: The Life & Times of Levi Fisher Ames. Photo by Ruffolo Photography courtesy of Danceworks.

In 2007, I was up at the Kohler Museum when the wooden carvings of Levi Fisher Ames were first on display. I’ve always loved Folk Art – now they call it Outsider Art — and Ames’ work spoke to me immediately. They’re raw, direct, fun and totally unpretentious. They’re theatrical too, the way he presented them in little shadow boxes. Sometimes they even tell a story with animals fighting or interacting in some way. And some of the animals are mythological.

But it was the combination of Levi’s carvings and his life story that really grabbed me. Here’s a guy who comes home damaged from war. He can’t work like he used to, but he just begins to carve; he teaches himself and just starts creating. And pretty soon it takes over his life. He’s researching animals, he’s photographing them, he’s constantly carving out in his yard and the kids in his neighborhood are coming around him and he’s teaching them and telling them stories. Then his vision expands again and he creates this amazing new life for himself as a 19th century showman with a traveling tent. He drags his whole family into it, too. But through it all, he stays true to his own artistic sense and his belief in his work.

He won’t sell any carvings and he’s determined that his collection stay together after he dies. Time has proven him right, in the sense that he’s really become somebody in the world of Outsider Art. His work is one of the more important collections at the Kohler museum. It’s been written about and toured internationally. His legacy is secure.

I love Levi’s story, because even though it’s historical, it touches so many themes I can relate to. Themes about healing and the power of creativity and our ability to reinvent ourselves. And then of course, our play, Against the Grain: The Life & Times of Levi Fisher Ames, (I co-wrote it with my longtime collaborator John Kishline) is also about saying goodbye because he’s letting go, he’s dying. It sounds like a mouthful, I know, but it all weaves together.

What are we aiming for with this production? We’re aiming for an integration of theater, dance and film that’s really unusual, where each art form plays an essential storytelling role. It’s not a play with dances or a dance with some text here and there. There are some events that can only be told by dance and others that need language and realistic behavior. Meanwhile, the film is a window into Levi’s mind. Sometimes it grounds us as to where he thinks we are; sometimes it’s as if we’re seeing his creative process. And the film will also connect the dancers to the actual carvings, in our minds. But really, at this point, we don’t know yet how it’s all going to come together and grow during the performances because we’re all on new ground. And that’s part of what makes it such an exciting collaboration.

I want people to be moved by the story. I want them to laugh and be touched and I want them to be wowed at points by all of these artistic mediums intersecting in one story. It’s also kind of a tour, if you will, through old Wisconsin. As you can tell, I’m passionate about it.

Against the Grain Gallery 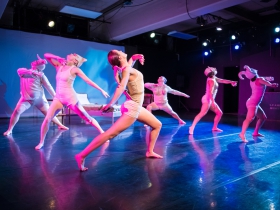 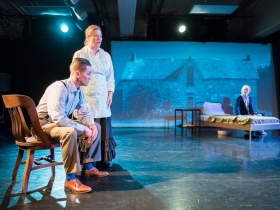 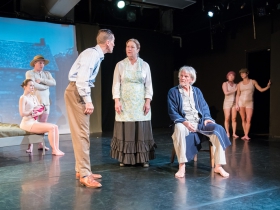 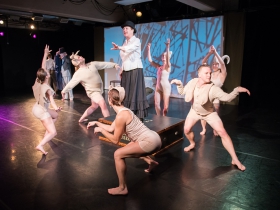 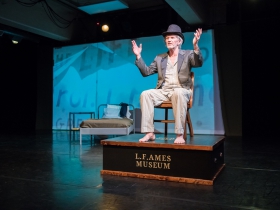 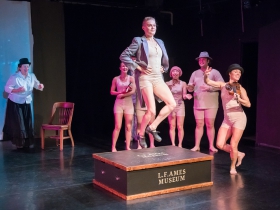 “Against the Grain: The Life & Times of Levi Fisher Ames,” will be performed today through Sunday, October 25-28 at Danceworks (1661 N. Water St.) It will also travel to Sheboygan’s Kohler Arts Center Nov. 9-10 where patrons can inspect Ames wood carvings, collected and preserved as he clearly hoped they would be.