Initiative will put more police officers on foot and bicycles on the streets of District 2.

By Sarah Lipo, Milwaukee Neighborhood News Service - Oct 21st, 2018 11:38 am
Get a daily rundown of the top stories on Urban Milwaukee 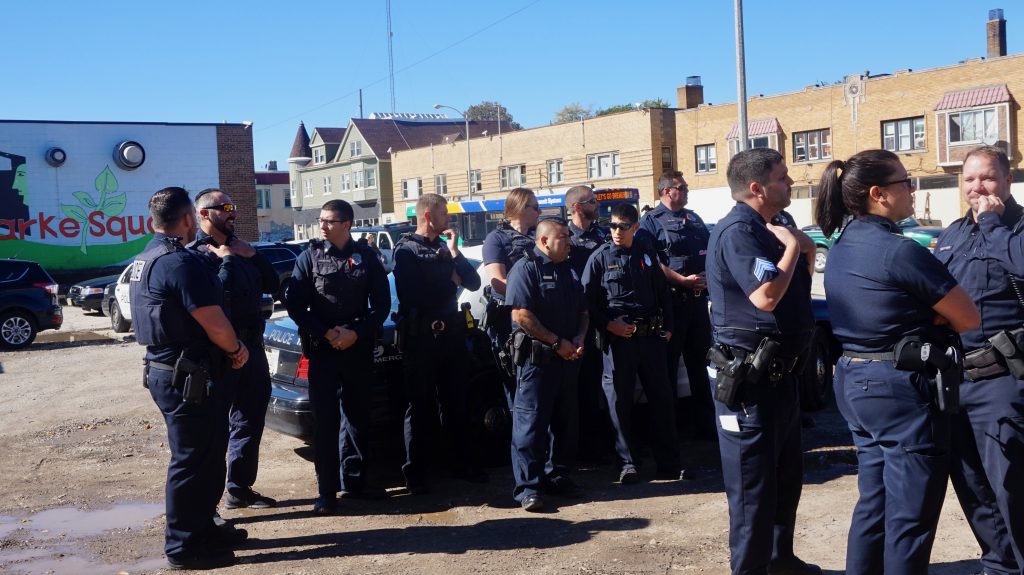 Police officers gather for the announcement of a new beat initiative in District 2. Photo by Sarah Lipo/NNS.

David Stachnik, the owner of Lindsay Foods Inc. on National Avenue, said some of his employees are afraid to walk to their cars at night, and the loitering and prostitution in the alley behind the meat wholesaler are not conducive to running a business. Stachnik has also heard gunshots in the back alley of his business’ parking lot.

Stachnik said he hopes a new South Side police initiative that will increase the number of officers on foot and bicycles in District 2 will eliminate these problems.

Paul Grippe, a Clarke Square resident who served as a block watch captain, said when he grew up, he knew the names of beat officers, and they knew him. Grippe added that safety is the biggest issue in District 2. “It’s just that we need to get the residents more involved, and they’re not,” he said.

According to Ald. Bob Donovan, it’s important for residents to develop trust and familiarity with officers. “I want officers patrolling these streets that know the difference between the church pastor and the drug dealer. The only way you can accomplish that is the same officers patrolling the same area day in and day out,” he said. 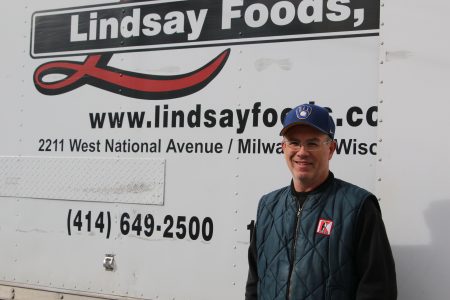 David Stachnik stands beside the Lindsay Foods’ truck outside his meat wholesaler business on National Avenue. Photo by Sarah Lipo/NNS.

Other police districts have different initiatives, said Sheronda Grant, a spokesperson for the Milwaukee Police Department. “Each District Captain has been given the autonomy to allocate their officers to meet the specific needs of their unique district,” Grant wrote in an email.

Omar Bravo, the community liaison for Christ St. Peter, 2229 W. Greenfield Ave., has been working in the neighborhood for three years. He said he hopes to see more cops walking around the neighborhood and patrolling, adding, “I think it makes such a difference.”

Retired MPS teacher Pamela Gustafson said she believes deeply in crime prevention. “As a teacher, I always worry about the safety of our children. I want the kids who walk to school, the elderly who walk to their doctor appointments and anyone just to be safe,” added Gustafson, who lives in District 6. She helped organize Operation Impact, a Facebook group dedicated to crime prevention and public safety.

According to Donovan, beat cops will have access to the addresses and phone numbers of business owners and block watch leaders in the neighborhood. “The connection that occurs, the trust that develops and the rapport gained is essential to improving police-community relations and restoring order to the area,” he said.

As part of the initiative, officers will attend church and school events to meet community members, according to a news release.

Stachnik said he has contacted the alderman’s office many times, without productive results. “The old police leadership didn’t put a big emphasis on this. They were more concerned with violent crime,” he said.

The appointment of Police Chief Alfonso Morales in April was essential to creating change in District 2, according to Grippe, who noted that change will take time.

Added Bravo, “(Morales) knows what is happening in the neighborhood, and wants to work with us.”

Donovan said the initiative will not solve all of Milwaukee’s problems. “This is not going to somehow eliminate crime in our neighborhoods, but what it will do is begin the process of restoring trust between police and the people they serve. It will begin to restore order and stability.”