By Ryeshia Farmer, Milwaukee Neighborhood News Service - Oct 8th, 2018 10:31 am
Get a daily rundown of the top stories on Urban Milwaukee 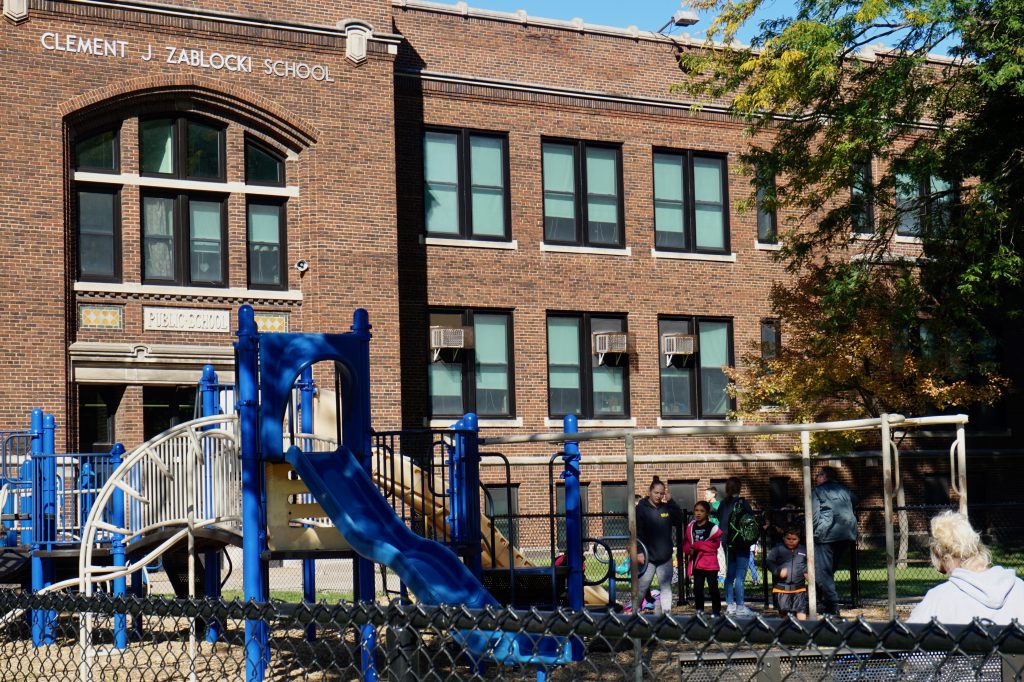 At a recent national forum on community schools, principal Chris Garza of Zablocki Elementary School heard a school leader make a comment that resonated with him and inspired him to action.

The principal said, “If your students don’t have their basic needs met, then they’re never going to get where they need to be,” recalled Garza. Based on this premise, Garza and the Zablocki staff decided to pursue the community school model, seeing it as the best way to meet the needs of students and their families. 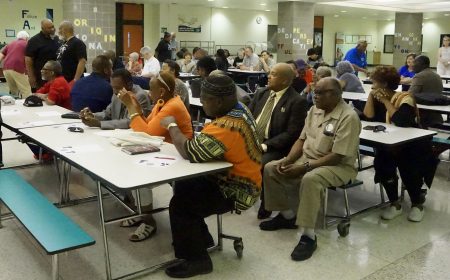 Members of the North Division Alumni Association attend a meeting at the school on June 28. The association is expected to be one of multiple stakeholders participating in the community schools initiative. Photo by Ryeshia Farmer/NNS.

Community schools work with United Way to identify a partner agency for their schools. The agency hires a coordinator, which organizes community conversations to determine the school’s focus. The Milwaukee Urban League is partnering with North Division and Sixteenth Street Community Health Center is working with Zablocki.

Instead of dictating plans for their schools, coordinators collect input from community members and find resources to implement their ideas, according to Danielle Costello, MPS’ family and community engagement specialist.

“The process of listening is about as structured and pre-planned as they are going to be,” Costello said.

Alston said that the coordinators will identify grant opportunities and work with community partners to obtain resources to bring their schools’ ideas to fruition.

“It’s really going to be about shaking every tree until something falls,” Alston added.

Zablocki received a University of Wisconsin-Milwaukee grant to sponsor a meeting for engaging the school’s refugee community, according to Ebratt. At the meeting, the families will learn what it will be like for their child to attend an MPS school. School administrators and staff will talk with refugee families about their language barriers, religious and dietary restrictions, and how they can be engaged in their children’s schooling through parent-teacher conferences and organization meetings.

After submitting their original community school applications and participating in the cohort, Zablocki and North Division were asked to reapply, and their participation greatly improved their second applications, according to Hurley.

“The cohort provided an opportunity for us to understand components and pieces that were missing during our first round of applications,” Garza said.

As cohort participants, Zablocki and North Division’s administrators learned how principals at community schools share leadership with students, teachers, families and neighborhood residents, and they began to create their own community school leadership teams and youth councils.

Alston said that the shared-leadership aspect of community schools shows families that the schools are committed to engaging them in decision-making.

“When Lincoln Avenue Elementary School had an attendance problem, the principal didn’t just say, ‘We’re going to put on this attendance initiative for a day.’” The parents designed the ‘Walking School Bus,’” in which parents walk to students’ homes to pick them up and get them to school, Hurley noted.

Another example of shared leadership occurred at James Madison Academic Campus, 8135 W. Florist Ave., which has been a community school for more than four years. At “Deliberative Dialogues” hosted by the school’s youth council, teachers and students discussed factors contributing to the schools’ poor performance, and the council offered recommendations on how to address them.

According to Elonna Jones Turner, a senior and youth leader at James Madison, the council participated in bringing the “Ubuntu” cultural relevance program to the school, which helps teachers better relate to students.

“Teachers take more pride in their classrooms now. They decorate them and spend more time outside of their doors during passing time,” Turner said.

“The staff weren’t really on board with hearing what students had to say at first, but now they want to know what students want, and they always ask students how we feel about decisions that will affect us,” Turner said.

Garza said that implementing the community school strategy is a process. “We’re excited to see where our children are going to be, as a result of this, in the next four to five years.”