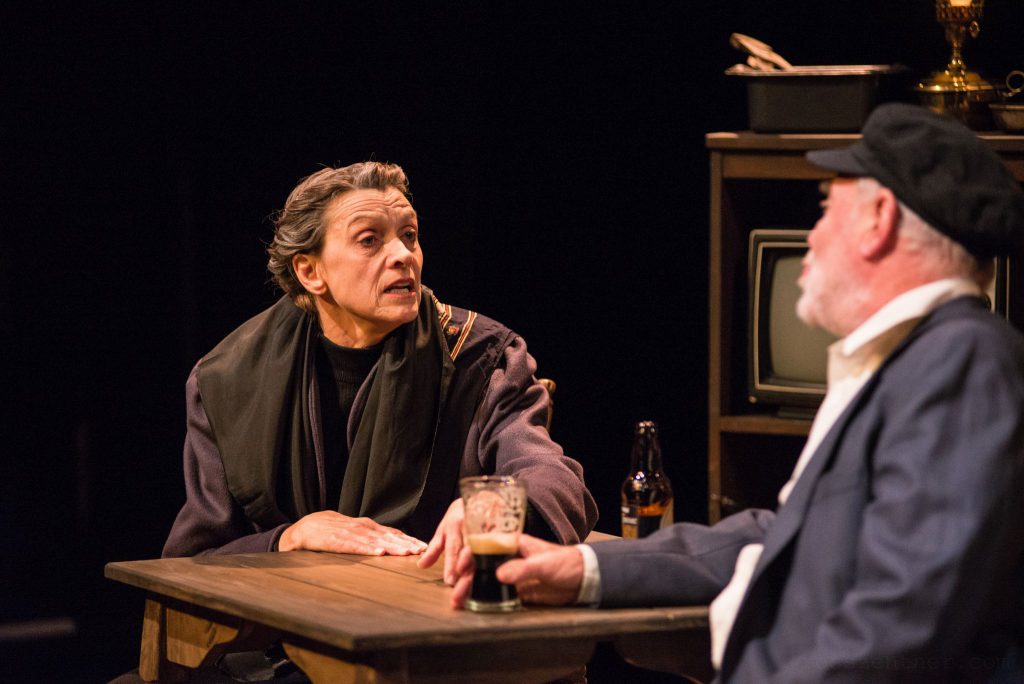 Next Act Theatre’s production of “Outside Mullingar.” Photo by Ross Zentner.

What starts as deathbed gloom between Irish farm families turns into the best comedic sex battle of the season as a middle aged milquetoast tries to counter the sharp-tongued spinster next door, both vibrating with long-held secrets.

We are in the hands of a clever playwright, John Patrick Shanley, who loves combat between the sexes – be it in the movie Moonstruck or the religious conflict in Doubt – and four of our community’s top actors: James Pickering, Carrie Hitchcock, David Cecsarini (also artistic director of Next Act Theatre) and Deborah Staples (one of the Midwest’s most accomplished actresses who is also Cecsarini’s spouse). 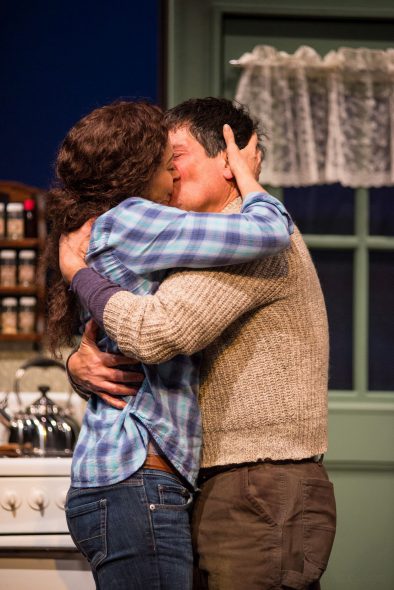 Next Act Theatre’s production of “Outside Mullingar.” Photo by Ross Zentner.

Outside Mullingar, which got mixed reviews in its Broadway debut in 2014, has been surpassingly reinterpreted by Next Act through October 21 to emphasize the romantic battle over the gloom. That works but only by giving shorter shrift to the interaction of the candid elders in the first half, where so much is explained about the lingering dispute between neighborhood farms and characters.

In the banter, Shanley sneaks in – sometimes hastily — explanations about the parcel of land that interferes with the gateway to the biggest farm and the history of childhood petulance and lost love that dots the present and impacts the plot. Rosemary, the spinster next door, lays into the father for his expectations about what makes a good Irish man while her aging mother clucks in sympathy.

An accomplished director, Edward Morgan, sensed where Stanley’s strength really lies – not in justifying the plot but in pursuing the lilting verbal slaps among the locals. The elders are brutally honest and stubborn, the middle aged children withdrawn until withering dialogue confrontations.

It could be argued that director Morgan also gave too much respect to Pickering and Hitchcock, the two actors in the elder parts, but that’s understandable. Their talents are considerable.

Pickering, who seems to have a death scene in virtually every important production hereabouts, has first-rate moments as Tony finally breaks down and asks forgiveness from his namesake son, Anthony. But the actor needed a tighter focus on the step-by-step internal moods of his anger and sarcasm that threaten the same son with disownment. Pickering seems too casual when others are taking him apart for his attitude or he is doing the same to them, but then he shakes us to our core as he ages and repents.

Hitchcock’s timing and snappy Irish mother repartee (she’s always right and the others are always wrong) could hardly be better, but she doesn’t need as much of the standard old age doddering that she provides. The interpretive depth is truer than the hoary movements.

This first act turns out to be a diverting if inconsistent setup for an outstanding second act duel between the meek, constantly uncomfortable Anthony and Rosemary, that pent-up firecracker next door who has worshipped this muddled man from afar without revealing her emotions.

Theirs is a revealing and amusing combination of awkwardness and honesty about middle-aged love, but Shanley knows it’s not just believable in the Ireland of his mind. There is actually character revelation behind the metal detector Anthony creeps around with or Rosemary’s nerve-shattering battle with smoking.

The language certainly jogs the audience belief that Shanley must be an Irish born playwright (he’s not, second generation American), but these middle aged characters — too proud, angry, embarrassed or shy to speak directly — have a resonance in all societies. When the actors strike those chords, the play sings.

Cecsarini in the second act creates a dutiful farmer of profound melancholy, the exact opposite of the angry masculinity the Irish expect of their men.  Staples in her moment-by-moment interpretations, self-amusement and angry honesty provides a whirlwind of acting – and feminine insight — that actually makes a whole out of a character the playwright is bouncing from pillar to post.

It is an inventive acting duet of pinpoint feelings involving two veteran actors playing against the grain of what their followers expect.

Rick Rasmussen’s set looks merely basic, but it is a useful collection of kitchen gimcrackery and a space that actually takes us over time to different places, helped by the lighting of Aaron Sherkow and props provided by Heidi Salter. Director Morgan is not much focused on full use of this space because his actors are engaged in digging out the honest interplay first. And that emphasis on humanity pays off. 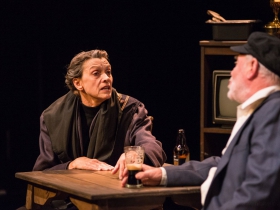 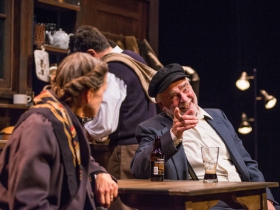 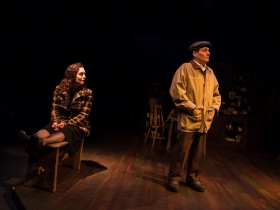 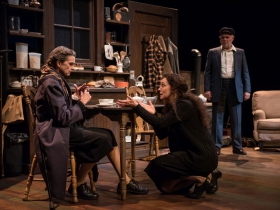 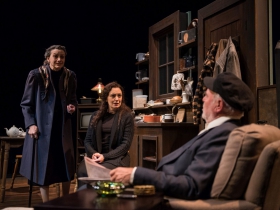 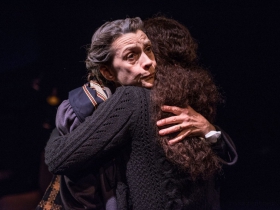