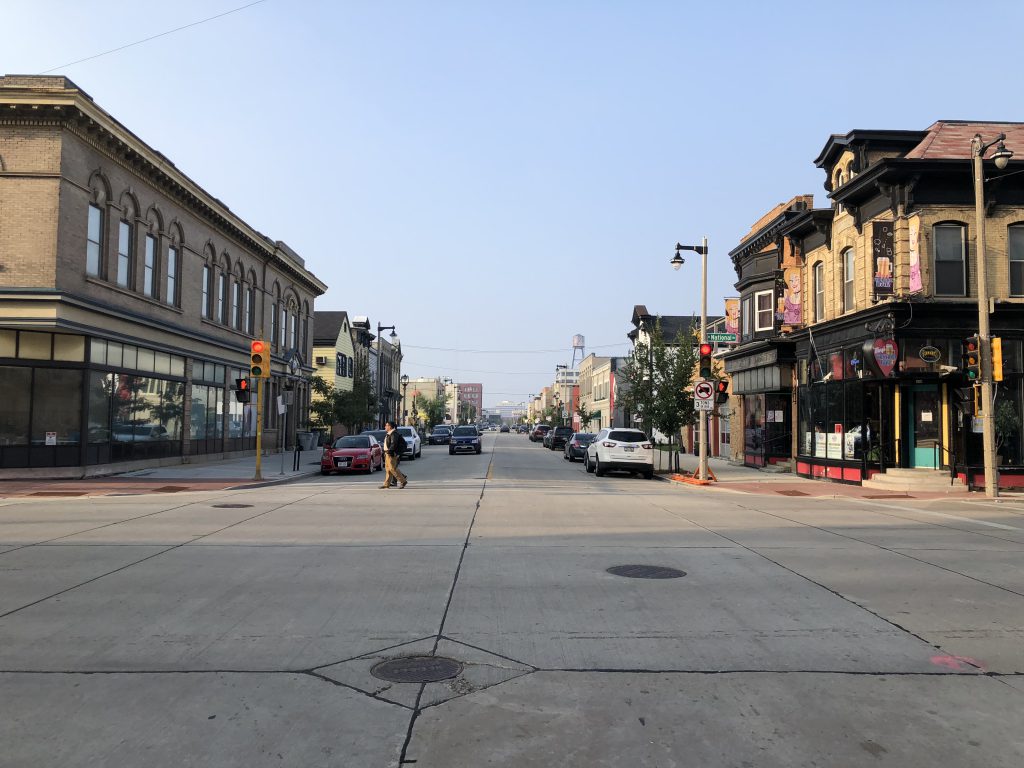 Of nearly equal height and size!

The First from Montreal

The Second from Virginia

The Third from Connecticut.

The domains of the First lay north and east of the Milwaukee River;

That of the Second south of the Milwaukee and Menomonee Rivers;

Upon one point these men were agreed, and only one.

And that was that neither of the others were to have a town on their lands.

—Edward D. Holton in remarks at the opening of the Chamber of Commerce, November 22nd, 1858

Among the lands of the founders of Milwaukee’s “Three Grand Divisions,” those of George Walker differed in a significant way from those of his rivals, Kilbourn and Juneau. When our community was opened to settlement in 1835, Walker’s Point provided the only practicable location for a deep water port. In that era, before rails or dependable roads, virtually all freight and passengers arrived and departed by ship. Advantage Walker.

Kilbourntown had no frontage on Lake Michigan, while Juneautown, atop a 100-foot high bluff, would have been prohibitively expensive and impractical for a port. Walker’s lakefront land, on the other hand was flat. It was level as the lake, on account of most of it being submerged below lake level. As his fellow pioneers raced ahead with their settlements in 1835, the title to Walker’s lands was encumbered, and it took seven years for him to secure his claim. With the legal dust settled, Walker filled his lands with dirt, beginning at Walker’s Point, an exposed portion of land at the south end of what is now the Water Street Bridge.

By the 1870s, the railroad became the major source of transportation and commerce, and Walker’s Point proved to be ideally suited as a site for industrialization and the thousands of newcomers to follow in the wake of mechanization and locomotives. Walker’s Point was grit and immigrants. And so things remained for a century.

Poverty as a Preservative

What were a half century ago some of America’s most impoverished and neglected neighborhoods are today among the most charming. Walker’s Point, the city’s most intact old neighborhood, is poised to join their ranks, it appears, as new businesses take root in old buildings. No street better reflects this trend than S. 5th St., known as Grove Street until a citywide street renaming program in 1930. Until just a few years ago the street was filled with unused or underutilized buildings. Many were boarded up, or shabbily remodeled. A few were lost to fire, neglect or cheap surface parking. 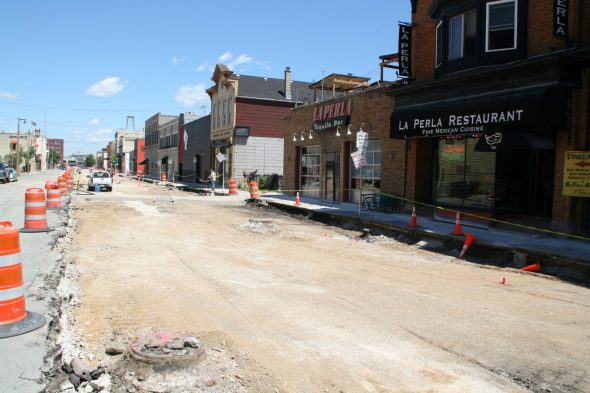 What had once been a lively neighborhood became a barren and desolate place. Of course it had its own pioneers in the form of artists and members of the gay community. A historic preservation district was created by a group of concerned citizens in the 1980s, which undoubtedly saved many structures, some now being rehabilitated.

Yet for all the efforts, it was a sidewalk widening project in 2017 that brought an unprecedented spurt of development to the old area. Factory buildings have been converted into restaurants, breweries, taverns, juice stores, tasting rooms, along with offices for architects and marketing firms. The sidewalks are lively; business is brisk and the economy has rebounded. The surest sign that the area has arrived is that it now has its own celebration, the Walker’s Point 5th Street Fest, to be held Saturday, September 22nd from Noon to 10 p.m.

Let’s take a walk around this neighborhood on the rebound.

Was Center of Bicycle Industry

The tremendous growth of Milwaukee industry in the late 19th century was fueled not only by the giant Walker’s Point factories like Allis-Chalmers, which occupied the northeast corner of S. 1st St. and W. National Ave., but also by smaller firms that supplied the giants with the bits and pieces of industry. 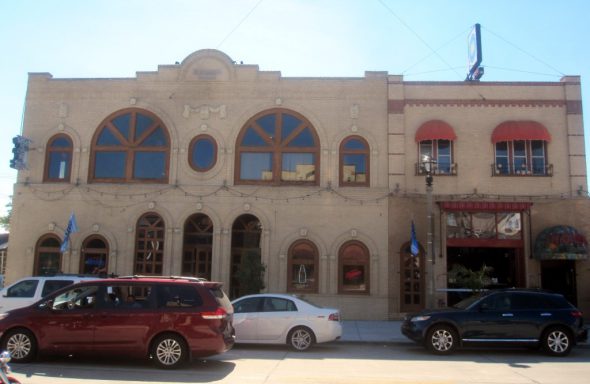 But within a few years, the automobile supplanted the bicycle industry. C. J. Smith and Sons, the world’s largest supplier of bicycle parts, operating from S. 1st and W. Bruce St., shifted production to automobile parts, particularly frames. Its site is now vacant, just a few blocks away. 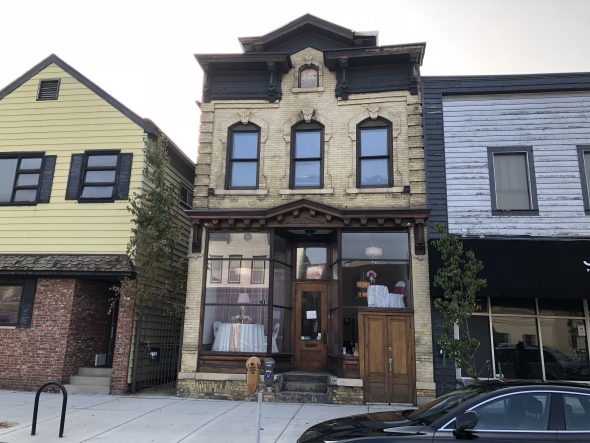 As can be seen by the names on the buildings, including the S. 5th St. facade of Hamburger Mary’s, German names like Ritmeier, who operated a pharmacy here beginning in 1877 were not uncommon. They were joined by Scandinavians employed at the nearby shipyards, and by the remaining stalwart WASPs, who even had an Episcopal Church in the neighborhood. By the turn of the century only New York had more immigrants than Milwaukee, and this was reflected in the immigrant Poles, Serbs, Croatians and others. Native Americans returned to their homeland in the early years of the 20th Century, congregating at places like Danford’s Bar, also known as “Indian John’s,” and located at S. 5th and W. Bruce streets. They were joined by Mexican immigrants, and in 1922 Our Lady of Guadalupe Mexican Mission opened at the William Gudert Building, 719 S. 5th St. The nearby Holy Trinity Church, 613 S. 4th St., founded in 1850 by Germans, and by then with a predominantly Eastern European congregation, adopted the Mexicans, and eventually the name Our Lady of Guadalupe, which the Jesuit congregation retains to this day. In 1935, the building was a restaurant operated by Nicholas Tlachinar. (Things must have been lonely here during that Depression year. S. 5th St. buildings included vacancies at 403, 428, 432, 525, 534, 538, 603, 615, 618, 638, 726, 728, 732 and 734. Half of the rooming house was empty at 802 S. 5th St.)

Still, the old mission building at 719 S. 5th St. hung on. By 1950 the place was operated by Wing’s Cycle and Lock Co. Wing’s business took flight and remained until about 1980 when it was replaced by the Brass Light Antique Lighting, a 20th Century example of a Walker’s Point industry. The firm, now known as Brass Light Gallery, is today located in the Menomonee Valley, and has an international customer base.

The handsome building on 5th St. it vacated has an empty storefront today, which is offered for lease by its owner, Dieter Wegner.

In 1940 we see quite a mix on the street. There was a wide variety of activities here, ranging from jewelers to rag dealers. A trip down the street shows the diversity: 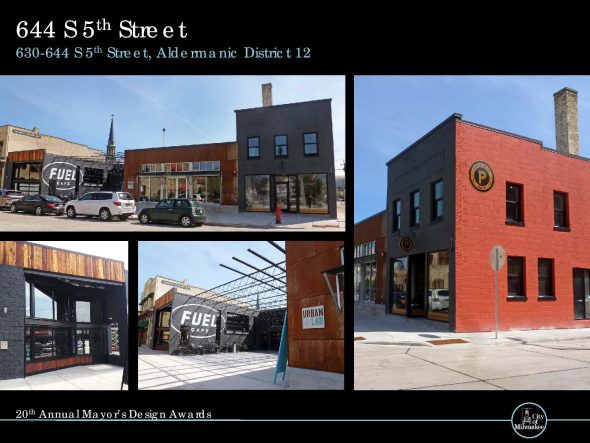 Mathias A. Kovacic operated a tavern at 600. Across the street, William E. Nelson sold coal. Boris Dimoff operated a billiards parlor at 606, while the Socialist Labor Party Hall and Headquarters was at 608. Arthur Morales operated a grocery store at 611; Peter Kostoff ran a restaurant at 612; Exhibitors Printing Service was at 614; Peter Poppoff ran a restaurant at 615; Frank Sedmak operated a tavern in the Grove Hotel at 616; the Great Lakes Mattress Co. was at 619; Mrs. Frances Gabriel ran a tavern at 625; Chromium Platers was at 626,;Advanced Mirror and Art Glass Works was at 627-31; Samuel Orlich sold real estate at 630; Mrs. Mildred Gorichar ran a saloon at 633-35; Bruce Welding Co. and Milwaukee Paper Pulley Works, manufacturers of shafting hangers, were at 634; Mrs. Paula Vogrich ran a tavern at 636; Frank Bregant had a tavern at 639; George Plavsich had a bakery at 640; Sam Lew had a laundry at 641 and Reliable Plating Works at 644.

J Mendelker and Son sold furniture at 706, Economy Sheet Metal Works was at 707, Howard Benning repaired furnaces at 711, Mrs. Margaret Ritonia had a grocery at 713, Schaefer Bros. Plumbing and Heating Co. was at 715, and The Mexican Mission was at 719, with Rev. Fidel De La Fuente living above. Russ Stout sold musical instruments and Philip Turcotte sold electrical appliances at 722, Herman Hoeft was a tailor with a shop and residence at 723, and the side entrance to the Tivoli Garden Tavern was at 729. Fay Drug Co. anchored the corner at 738.

Fast forward 45 years, and the changes to the street were evident. Using the same buildings cited above (if still standing) as examples, note the activities on the street. 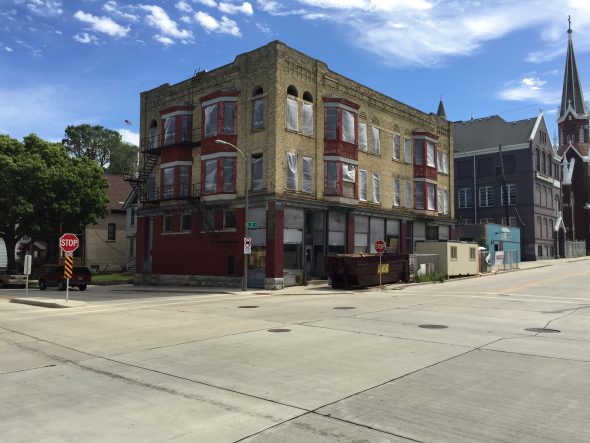 There have been so many changes over the last couple of decades that the commercial and residential fabric of S. 5th St. is barely recognizable. A socialist meeting hall has been replaced with a tapas bar. A coffee shop, a juicer and an architect all moved into an industrial building. We have stores that sell home furnishings, and any shops that deal in secondhand wares sell the good stuff. Arts organizations like Arts at Large and the Grove Gallery have taken root here. Taverns operated by widows are now infrequent, while breweries and upscale dining spots have made their appearance. Just last week Gravity Marketing LLC opened its new office at 722 S. 5th St. where musical instruments and electrical appliances were once sold. Find out for yourself the exciting changes at the Walker’s Point 5th Street Fest to be held Saturday, September 22nd from Noon to 10 p.m.

One thought on “Plenty of Horne: The Gritty History of S. 5th St.”