By Ana Martinez-Ortiz, Milwaukee Neighborhood News Service - Sep 19th, 2018 09:44 am
Get a daily rundown of the top stories on Urban Milwaukee 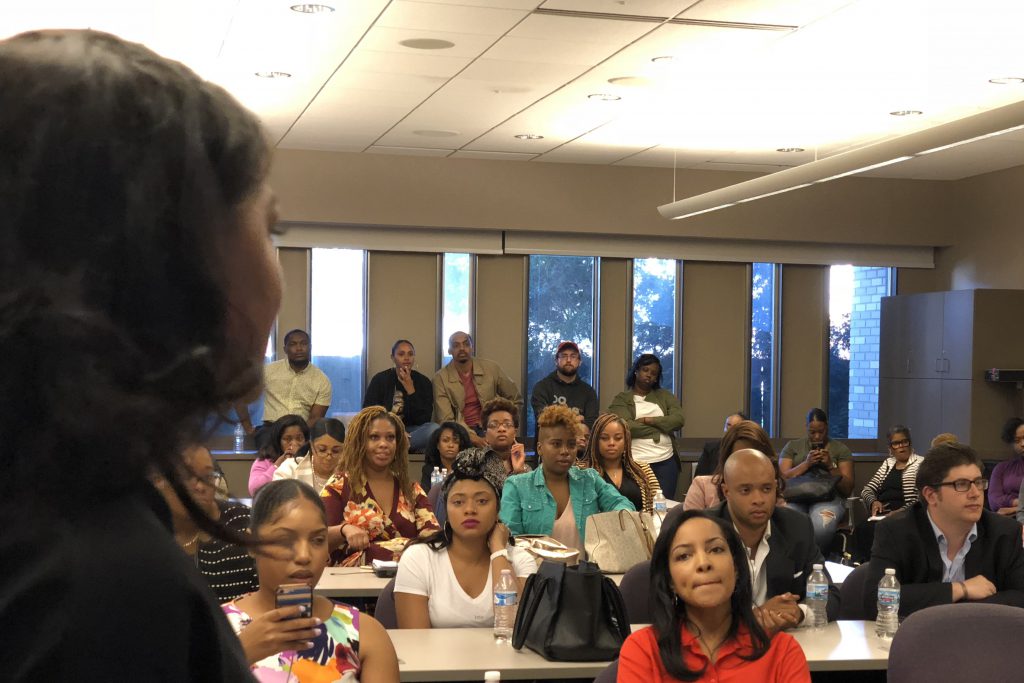 Sevetri Wilson explains the lessons she learned as the founder of two startups. Photo courtesy of YES/NNS.

After attending a recent “Blueprint Bootcamp,” a business development program geared specifically toward entrepreneurs of color, founders of 12 companies were chosen to advance to the next stage in a process in which three will receive financial assistance. The event was sponsored by the Young Enterprising Society (YES), founded by brothers Khalif and Que El-Amin.

POTTY Pearls, began two years ago when founder Tyeshia Coopwood went to use the restroom while at work. The toilets threw off such a horrible smell that Coopwood returned to her desk almost immediately to warn her co-workers. At the time, what started as idle office chitchat soon inspired Coopwood to create her own startup. 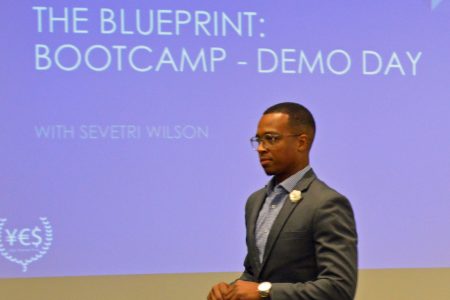 Khalif El-Amin, the co-founder of YES, says black and brown entrepreneurs have the ability to change Milwaukee and the world. Photo by Ana Martinez-Ortiz/NNS.

While she and her coworkers discussed how to solve the bathroom stench without embarrassing anyone, someone recalled that Coopwood had minored in chemistry. This reminder encouraged her to begin researching and developing a product that could be both discreet and functional when it came to masking bathroom odor.

Eventually, after several trials, she came up with POTTY Pearls, a small pearl that goes in the toilet before it is used.

To learn how to navigate the vast market and how to move forward with her product, Coopwood applied for YES’s Blueprint Bootcamp. She was one of 57 applicants looking to fill one of the 40 vacancies.

The idea for the Bootcamp came to Khalif and Que El-Amin after they attended a tech event. According to Khalif, there were 400 people at that event and only five of them were people of color. So, YES, along with the Milwaukee Institute and Northwestern Mutual, decided to create the Blueprint.

“We [entrepreneurs of color] have a lot to offer not only for the city but for the world,” Khalif said.

The Bootcamp is the first part of the program, Khalif explained. Earlier this month, the 40 business owners gathered at Century City Tower to acquire entrepreneurial skills. The event concluded with a talk by Sevetri Wilson, the owner and founder of Solid Ground Innovations, a consulting firm, and ExemptMeNow, an online platform that helps nonprofits get started. Wilson is noted for being the first African-American woman in Louisiana to raise more than $1 million in venture capital investments.

“I knew that I had a very entrepreneurial spirit,” Wilson told the crowd.

As a young adult, Wilson didn’t just want to create a business, she said, but to pave the way for people who looked like her. During her talk, she encouraged the attendees not to be afraid to release their product, because they need feedback. She also said to get comfortable with talking about money and understanding one’s budget and finances.

“It is about the money,” she said. “Money gives you options.”

With her first business, it took Wilson five years to make $1 million. It took her seven months to make her second million. There’s a formula, she said, and once it’s understood it’s easy to replicate.

Participants also got the chance to tell the crowd their 30-second pitch. Aziz Abdullah of Root Media was met with thunderous applause after his talk.

Root Media is a “complimentary digital coupon platform,” Abdullah said. First, Abdullah connects with fellow business owners to show them the benefit of data-driven marketing. Then, the company performs an assessment to determine what it needs to survive.

Abdullah, who used to work as a door-to-door salesman for other African-American-owned media companies, said their techniques were outdated. He also found that people don’t like getting bombarded with questions.

“Many people are working in the business and not on the business,” he said. “They don’t have time to talk to you unless you’re giving them something.” Root Media can help potential clients make a website or a logo.

Abdullah said the most difficult part for entrepreneurs isn’t connecting with people; it’s attracting investors and having to “bootstrap.”

“Do I want to pay this bill, or do I need to put this back into the company because I believe in it that much?” he asked.

Coopwood said finding balance among her startup, personal life and other endeavors can be challenging. She’s hoping that the lessons she acquired, such as learning to sell the “why” instead of the product itself, will help her in the future.