By Grace Connatser, Milwaukee Neighborhood News Service - Sep 18th, 2018 10:21 am
Get a daily rundown of the top stories on Urban Milwaukee 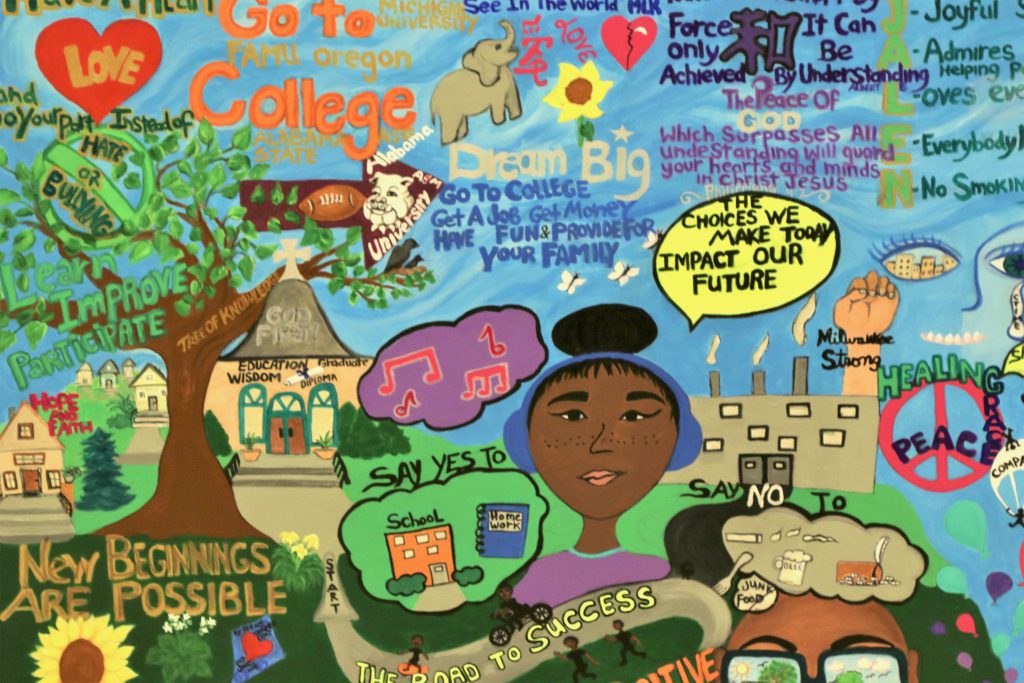 The mural displays the teens’ good choices, including going to college and avoiding drug use. Photo by Grace Connatser/NNS.

The New Beginnings are Possible after-school and summer care program in Thurston Woods brought arts and crafts time to a whole new level this summer.

Fourteen teenagers, ranging in age from 13-17, painted the mural throughout the summer. The mural represents the positive choices the teens want to make in their lives. Sections focus on going to college, avoiding drugs and being environmentally conscious.

Artist Jeanette Wright-Claus, who coordinated the project, has worked with New Beginnings are Possible, a faith-based youth center at 6100 N. 42nd St., in the past. After showing the summer program teens a video on making bad decisions, she asked what the young people wanted to do with their lives. That led to the mural project. 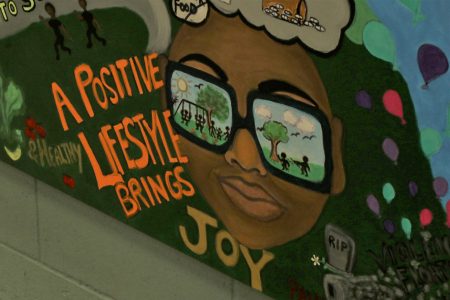 “I felt compelled to speak to the teens about those types of choices,” Wright-Claus said. “I brought up the fact that I have two young men that had gotten in trouble and were incarcerated, and I didn’t want to see (the teens) make those types of decisions.”

Wright-Claus said the mural is especially relevant now because of the crime and violence in Milwaukee neighborhoods. She said she wanted the mural to start a dialogue among the youth. She also played music that had positive and negative lyrics to depict various choices, and the impact those would have on their lives. The teens then created sketches of positive choices, eventually turning them into images included in the mural.

“There weren’t enough hours in the day (to paint),” Wright-Claus said. “We continued to paint until we dropped.”

Jaiden Pickett, 13, said he wanted to “inspire other people” through his painting, which depicts going to college. “A lot of people don’t want to go to college,” he added. Jaiden, who is the starting quarterback at his school, said he wants to play football in college.

Hope Armstrong, 14, said she painted other murals at Highland Community School when she went there. “I wanted to be creative,” she said. “I wanted to leave my mark on the school.”

Hope painted a young girl who represents her in the New Beginnings mural. She also painted sections on good and bad decisions, such as saying no to drugs and saying yes to going to school. “The choices we make today impact our future,” she wrote.

One section she painted is intended to make people more environmentally conscious. “I’m an ecologist,” Hope said, so I just have to put that there to show what we’re doing in the world and that we’re leaving our carbon footprint on the world.”

Tracina Ragsdale, 13, painted a part of the mural focusing on world peace. “Peace cannot be kept by force, it can only be achieved by understanding” was one of the phrases she wrote. Tracina also painted the Japanese character for peace. She said she wants to help end violence in Milwaukee.

Tracina said she learned a lot from painting the mural during the summer. “When I started painting it, I kind of wanted to stop because I felt like it wasn’t good enough,” she said. “But I never gave up.”