By Grace Connatser, Milwaukee Neighborhood News Service - Sep 11th, 2018 10:24 am
Get a daily rundown of the top stories on Urban Milwaukee 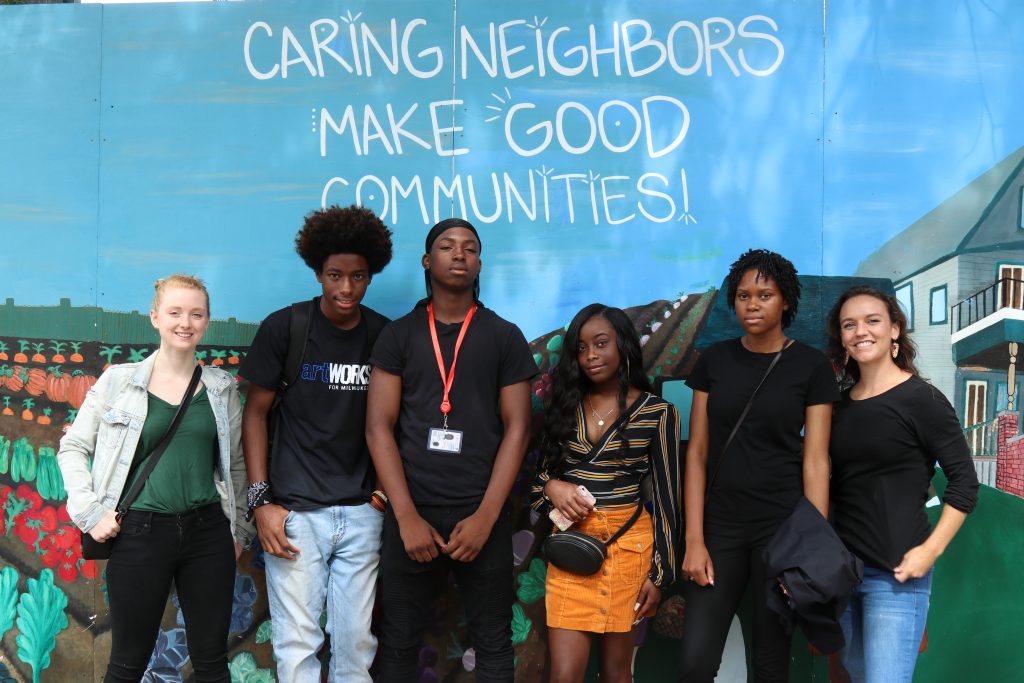 Harvest Day has been a cornerstone event for the Lindsay Heights community for 18 years, but this year was special.

The “Caring Neighbors” mural that stands next to the Walnut Way headquarters, 2240 N. 17th St., was painted in 2006 by ArtWorks for Milwaukee. Since then, panels had been knocked out after a car accident and paint was chipped and peeling. During the summer, several young artists working with ArtWorks stepped forward to restore the mural to its original form.

Christina Theobald, the lead artist on the project, said it took months to complete. Work began in mid-July and ended the morning of Harvest Day. Qaamar Morehouse said the artists worked from 9 a.m. to 2 p.m. most days of the week refinishing the mural. The process involved cleaning off debris, sanding down sections that had peeled away and recreating the original paint colors. Theobald said some of the colors were so worn that the wood behind them was visible.

“It was kind of like doing a puzzle, trying to understand where the artist before you was coming from, then trying to replicate that, but still putting yourself in it,” Theobald said.

Emily Moore, Brandon Carson, Jr., Quin’Niya Richardson and Shavante Grant also worked on the mural and were at Harvest Day to celebrate its restoration. 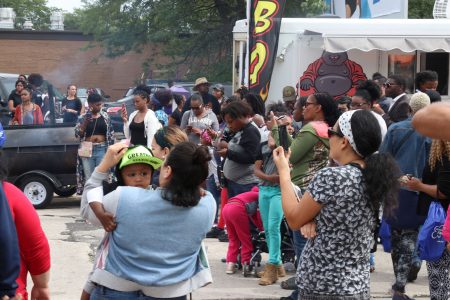 Many of the young artists said the mural gives Lindsay Heights something to be proud of. The community-based theme brings people together, Theobald said.

Richardson, a former intern at ArtWorks, said she had never noticed the artwork in Lindsay Heights until she began her internship.

“I didn’t start to pay attention to the artwork in communities until I got into this,” Richardson said. “I started looking around. There’s a lot of beautiful artwork around this neighborhood.”

Morehouse, the youngest of the interns at 14, said he was proud of the work he did.

“I’m really glad I got involved in this, because it really helped me mature a little bit,” Morehouse said. “It actually helped me get another job.”

Brandon Carson Jr., said he found a personal connection to the mural while he was repairing it. One of the figures in the mural looks exactly like him, right down to the black do-rag on his head.

“It’s like a personal piece,” Carson said. “Something I can always remember.”

Terry Murphy, the executive director of ArtWorks, said she had noticed the deterioration of the mural and decided to do something about it. She got funding for the project through a Heart of Canal Street grant from Potawatomi Hotel and Casino. She said the mural should last for at least another 15 years after ArtWorks applies an anti-graffiti coating to it.

“I thought this would be a great project to re-engage new youth,” Murphy said. “(The mural) has become an icon of the progress of Lindsay Heights. It’s something you want to preserve.”

Deaduri Gales, Harvest Day’s chief organizer for three years, said this year’s group of vendors was bigger and more diverse than ever. Organizations such as the American Cancer Society, Social Development Commission and the All of Us Research Program staffed informational tents and tables throughout the event. Vienna Beef, That Salsa Lady, Nature’s Tasty Treats and several other food vendors offered choices including barbeque, queso and chips, and lemonade.

Retail businesses included Aquarius Creations, which sells bath products, and Happy Hustlin’, which sells T-shirts, and others. The stage featured DJ Kima Hamilton of 88.9 Milwaukee, K-Stamp and Nefertari African Dance Company. All the vendors and performers were local, and some originate from Lindsay Heights.

“Each year, I’m always amazed,” Gales said. “I really enjoy the community; everybody just getting together and sharing the music and food … trying to change the narrative of what’s happening in Milwaukee.”

The Nefertari African Dance Company performs at every Harvest Day event, but this year the group celebrated its 50th year in performance. Nefertari has brought African traditions to the North Side since 1968 and has been performing at Harvest Day since 2000.

Director Marilynn Douglas said the dancers perform West and South African dances all over Milwaukee and the country. But, Douglas said, Harvest Day is too important to miss because of Nefertari’s connection to Walnut Way. Douglas was a good friend of Mario Hall, a Walnut Way staff member who died in September 2013. Douglas said she has dedicated each year’s performance to him since his death.

“It’s just something we’ve been doing … in honor of our good friend Mario, who passed away several years ago,” Douglas said. “We always make sure we come. It’s our way of celebrating his life.”

Vanessa Britton-Winston, a Harvest Day attendee, said going to the festival has been a tradition in her family for several years. Because her children perform in the Nefertari African Dance Company, the event has made its way into the family’s schedule every year.

“This is a beautiful day,” Britton-Winston said. “It’s such a great opportunity to connect with people … and rub shoulders with people like me.”

Walnut Way Executive Director Antonio Butts said not only was the turnout greater than past years, but this year’s theme, “Lead From Where You Live,” brings something special to the neighborhood by focusing on leadership and engagement.

“We’re encouraging all neighbors throughout the Lindsay Heights neighborhood to engage and be a part of the transformation that’s happening here,” Butts said. “The mural further inspires. It’s a symbol of what’s possible.”