They ranged from seller of homemade cosmetic and medicinal products to ‘hustlin’ T-shirts. 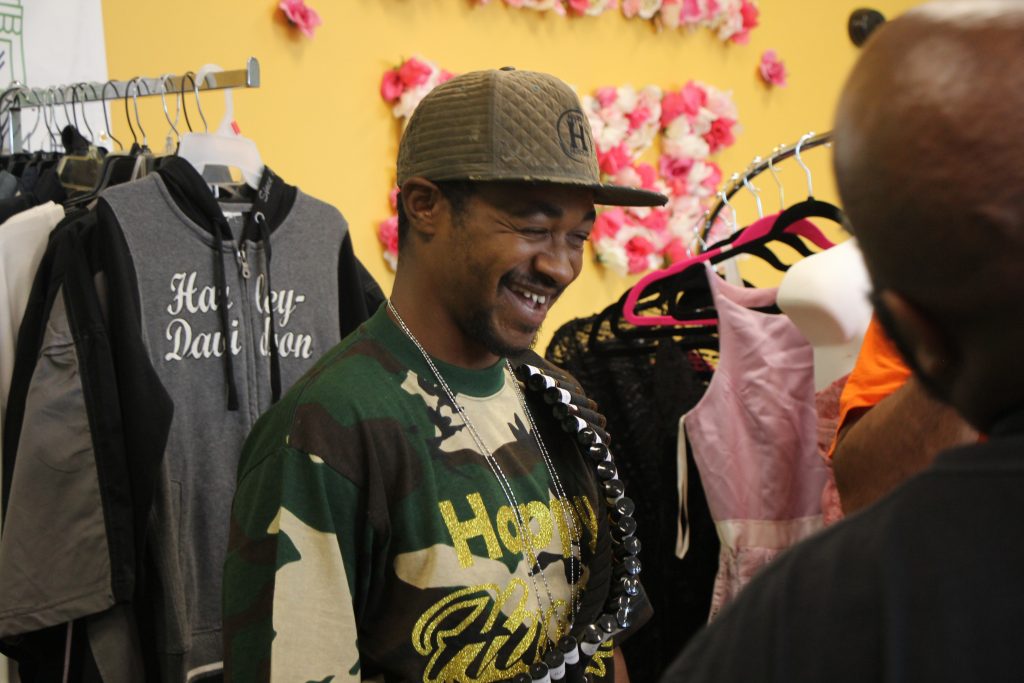 Mike Hodges, the owner of Happy Hustlin’, says the business has turned his life around. Photo by Grace Connatser/NNS.

Five years ago, Mike Hodges was a criminal stuck in a rut. Now, he has turned his life around with his screen-printing business, Happy Hustlin’.

“I said, ‘now hold on, I know there’s other options out here,’” Hodges said. “I can use the same energy … in positive, productive ways.”

Happy Hustlin’ is one of seven businesses introduced in the third round of Pop-Up MKE, a program that gives businesses a physical retail platform rent-free for one month. Happy Hustlin’ is located at 1617 W. North Ave. along with Basia Rose Designs. Yenepa Herbals and LoveSum Court are located at 1008 S. Cesar E. Chavez Drive. POPtherapy, FlyBlooms by Funky Fly FlowerChild and Distinctive Designs by Tomira are located at 339 W. North Ave.

Hodges both creates his own T-shirt designs and offers designs from other creators. He founded his business in 2014 after deciding to begin a life of “self-rehabilitation.” He said the name Happy Hustlin’ comes from being a “hustler” for good instead of bad.

Happy Hustlin’ most recently was located in the Milwaukee Mall, 2100 W. North Ave. The mall closed for redevelopment this past spring, leading the already-overlooked businesses within to fend for themselves. Despite limited resources and finances, Hodges simply rolls with the punches. 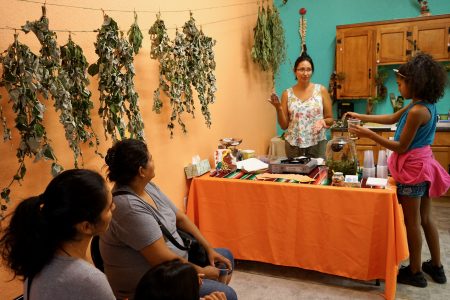 Angela Kingsawan was raised in her indigenous Aztec culture, also known as Tigua in the native Aztec language, Nahuatl. She identifies as Tigua, Mexica and Raramurí. As an herbalist for 24 years, she has focused on going back to her traditional roots. She grows her own herbs in her backyard and within her home. She even makes medicine by hand, especially since one of her daughters is allergic to penicillin.

“I’m very old fashioned,” Kingsawan said. “I do everything on the stove. I don’t use blenders or food processors. I grind in my molcajete (a traditional Mexican mortar and pestle).”

Kingsawan owns Yenepa Herbals, where she sells homemade cosmetic and medicinal products such as salves and sprays. Although she’s conducted herb-related business for many years, she officially established Yenepa Herbals last year. She said “everything” she brings to her business is indigenous. Yenepa means “ancient” in Nahuatl, a nod to her Tigua background. “When I was growing up, (my grandmother) taught me a lot about how to interact with nature,” Kingsawan said.

Neither Hodges nor Kingsawan is particularly interested in the profits, they just want to help out their communities. They keep prices low to attract low-income families, and they hope to bring inspiration to others through their work.

“I want to make things affordable for minority communities,” Kingsawan said. “Most people can’t afford to go into Outpost or Whole Foods. But they still deserve to use things that are good for them, and they should have that accessibility.”

“I can’t give you a thousand dollars, but I can give you some hope and inspiration,” Hodges said. “If I inspire somebody else, then that’s my million dollars.”

Hodges is a single father of two girls, Maria, 8, and Zoe, 2. He said he wanted to go down a different path so that his children can follow in his footsteps. “I want my kids to see the process of being an entrepreneur,” Hodges said. “I hope they choose to be entrepreneurs outside of having a regular 9-5 (job). I just try to present them with better and more options.”

Kingsawan also hopes that her three daughters will follow in her exploration of Tigua culture. Just as she grew up in an Aztec world, she said she hopes her daughters will continue it. “My older daughters and I started Aztec dancing,” she said. “We started doing it for performance, but then we started meeting people and we … only did it for ceremony. We would travel around the country (to dance).”

Iveliz Guirau, known by her business name Boss Lady E., has known and shopped with Hodges since last year. She said Hodges’s ability to maintain his business while also being a single father inspires her. “I love that … he came from the Milwaukee Mall and got a bigger blessing,” Guirau said. “Because he’s been grinding very hard. He’s earned it.”

Tasha Jones said it’s refreshing that he’s not the suit-and-tie type. “In this city, what you see with businesses, people maintain a façade,” Jones said. “They have to wear a professional suit, a tie, and do all of these things to appease … society. He does none of that. He’s an outlier.”

Beth Haskovec, the commercial revitalization program officer at Local Initiatives Support Corp. (LISC), is the go-to person for the pop-up project. The goal is to continue building economic development in underprivileged Milwaukee neighborhoods without displacing families during redevelopment. Haskovec said she wants to work on what’s already there rather than replace those businesses with something new.

“(We’re) using the pop-ups as a strategy for anti-displacement work,” Haskovec said. “Making sure that as the neighborhoods around downtown grow and change, people of color are building wealth and are able to stay in those neighborhoods.”

Haskovec said LISC secured funding for the project through the City of Milwaukee and Chase Bank. Not only did Pop-Up MKE provide a free retail space, but it also gave tenants entrepreneurship and business financing training and resources. Overall, she said the boost from the program was enough for business owners such as Hodges and Kingsawan to get on their feet, make connections and increase their share of the market, even if the space is only temporary.

“They’re starting to build a reputation and a relationship with the neighborhoods,” Haskovec said. “That doesn’t just stop after 30 days.”

Haskovec said she hopes LISC can do a similar project in the near future. “I think if we invest in (small business) and provide incentives for it, it can grow.”