For 50 years, local Ladies of Charity has given clothing to countless children.

By Ana Martinez-Ortiz, Milwaukee Neighborhood News Service - Sep 5th, 2018 10:52 am
Get a daily rundown of the top stories on Urban Milwaukee 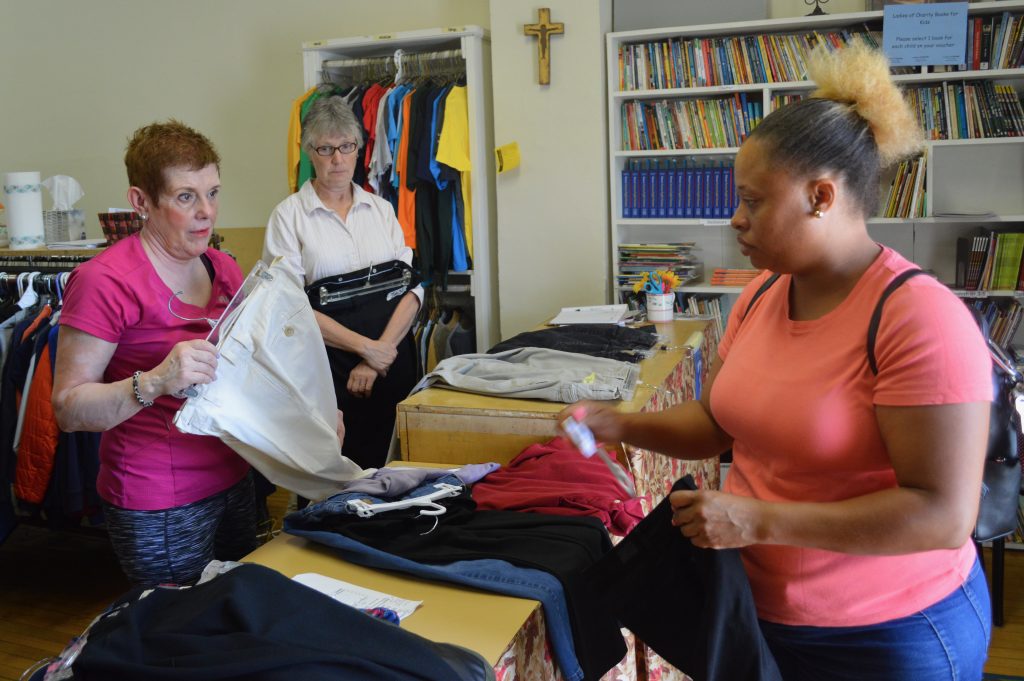 Cathryn Blunt determines if a pair of pants will fit her son. Photo by Ana Martinez-Ortiz.

Bertha Harris had Lady Luck on her side the day she walked into the Children’s Clothing Center at 1936 Vel R. Phillips Ave. A friend from 14 years ago recognized her earlier that day and gave her a free ride in his taxi. And, although she lacked the required voucher, Harris left the center that day with three garbage bags full of clothes for her sons.

“I’m so grateful; you folks are absolutely lovely,” she said to the volunteers.

The Children’s Clothing Center was founded 50 years ago by the Ladies of Charity Milwaukee chapter. Each chapter within the international organization dedicates itself to some form of charity.

“Our emphasis is on clothing the children,” said Francie Shea, one of 120 volunteers.

Each year, the group opens its doors from August through April, every Thursday and the second Saturday of the month. Although the store is small, Shea said it’s beneficial being in an accessible area that’s on a bus route. 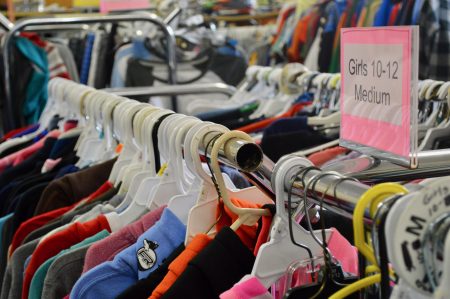 The store is organized by age and category, to make it easier for the volunteers. Photo by Ana Martinez-Ortiz.

Parents or children who wish to pick up clothing must have a voucher supplied by social workers or schools. The voucher provides a child with five tops, three pants, a hoodie, a winter coat, gloves, a hat, seven pairs of socks, underwear, a book and a dictionary — for free.

Customers can also request a uniform. Harris’s eldest son, Courtlyn, was originally supposed to attend Alliance High School, but she switched him to Destiny High School because it requires a uniform.

“I wish all schools did uniforms,” said Harris. “It makes it easier for parents like me who can’t afford a thing.”

Harris was forced to leave all her belongings, including those of her four sons, in her house after she was evicted. Currently, she lives with her sister.

A majority of the clothes and funding to support the Children’s Clothing Center comes through donations. Volunteers also dig through “lost and founds” and scour rummage sales for quality clothing.

Volunteer Gail Adams often frequents rummage sales just before they close. If she’s lucky, she’ll fill her entire car. Once the clothes are acquired, some volunteers wash them, and others sort them.

“Everybody has their niche,” said Adams. “It’s a well-oiled machine.”

Volunteers put pajamas, shorts, dresses and infant clothes in bins up front for families to search through, while everything else is hung up in back. Underwear and socks are always bought new, and the entire store is organized by age and category. When an individual comes in, volunteers divide and conquer. Some search for winter coats, others for pants and a few for shirts. A voucher allows one visit a year.

However, “We have exceptions,” Adams said. “People have bedbugs [or] fires; people get evicted.”

Volunteers bring the clothes to the front table, where customers can view their options. One time, Shea said, a group of teenage boys came in and refused every option presented to them. Eventually, the women allowed them to peruse on their own in the store, only to choose the same items that the volunteers had offered.

Parents usually want to make sure the clothes are the correct size and that they match their children’s style. Cathryn Blunt, for example, wanted to make sure her daughter’s winter coat was both functional and fashionable.

Blunt’s three children attend Congress School, Milwaukee School of the Arts and Carter’s Christian Academy. This was her third year coming to the center.

“I try to save up,” Blunt said, but over the summer she takes off from work to spend quality time with her children.

The Children’s Clothing Center allows her to enjoy her children and provide them with new clothes, she said.

The center clothes many children, but Adams and Shea know they could be helping many more.

“We are missing so many kids, and that hurts,” said Adams.