By Abby Ng, Milwaukee Neighborhood News Service - Aug 26th, 2018 10:47 am
Get a daily rundown of the top stories on Urban Milwaukee 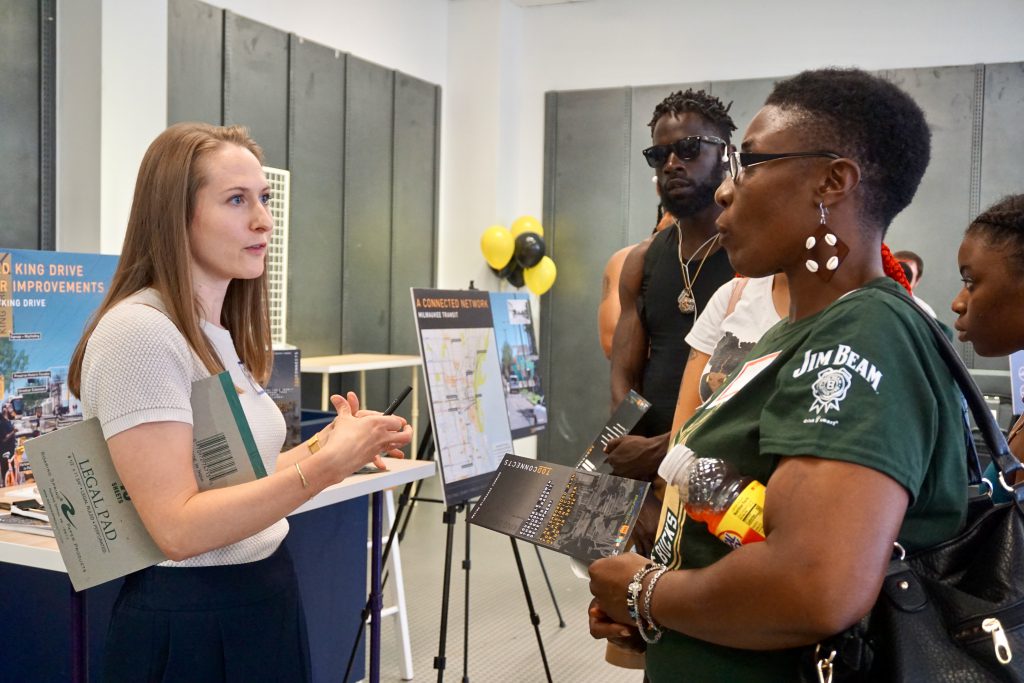 After living in Bronzeville for more than 30 years, Sharon Abston said she thinks it is about time change came to the neighborhood.

“I’ve seen a lot of change in other corridors of the city, but I would always look and ask, ‘Why isn’t that happening on King Drive?’” she said.

The Griot Apartments, the Historic Garfield Apartments, America’s Black Holocaust Museum and Pete’s Fruit Market are all part of a new wave of construction in the neighborhood, and more development is on the way.

The City of Milwaukee Department of City Development (DCD) and the Historic King Drive BID presented their final plan for streetcar expansion and economic development along Martin Luther King Drive at a recent community workshop.

The meeting was the last in a yearlong series and marked the end of the Equitable Transit Oriented Development (TOD) Planning Study on the North Side. The South Side portion of the study will conclude at a meeting in Walker’s Point on Sept. 8.

With construction on the first segment of The Hop nearly complete, the plan is part of Mayor Tom Barrett’s vision to extend the streetcar beyond downtown.

At the open house-style workshop at the former Foot Locker and recent pop-up shop, 339 W. North Ave., attendees were able to hear an overview about different parts of the plan, including proposed corridor improvements, implementation strategy, public art strategy and anti-displacement strategy. 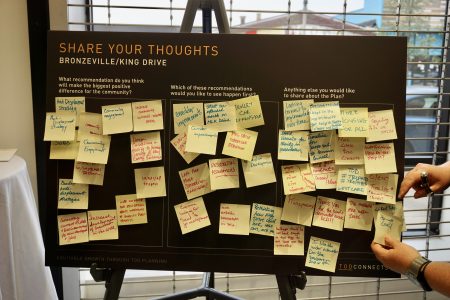 Workshop attendees were able to give suggestions at the final “share your thoughts” station. Photo by Abby Ng.

The overarching goals of the plan are to preserve choice and equity, said Sam Leichtling, DCD long range planning manager.

“Preserving choice means making sure existing residents, whether they’re homeowners or renters who want to stay in the neighborhood, have the choice to do so,” Leichtling said. “We define equity as making sure that as there’s new wealth created by all this development downtown, existing residents and groups that have been historically underrepresented are able to build wealth from these new opportunities.”

Deshea Agee, executive director of the Historic King Drive BID, said that although the project is about transit, “it’s more than just about the streetcar.”

“It’s about economic development generally,” he said. “This plan is framed in a way that regardless if the streetcar comes or not, this plan is something that we can work with.”

“This process has helped illustrate the way that transit can also serve to accelerate some of the other changes that people want to see as far as attracting businesses and making King Drive feel more walkable,” Leichtling added.

Detailed information regarding zoning, bikeways, mixed-income and affordable housing, and focus areas for residential and retail development, such as the revitalization of the Coakley Building, are included in the 101-page document.

“Community engagement has been paramount in making this effort successful,” she said.

Karen Thomas, WestCare Wisconsin employee, said she is grateful for the emphasis on community outreach.

“I love that they actually did listen to the residents and put their concerns at the forefront to let the public know they are listening,” she said.

Although community members said they felt included in the process, some residents still have concerns, especially regarding gentrification and displacement.

“I’m a realist from the standpoint that I know that with change like this, some people are going to be left out,” Abston said.

To address the concerns about gentrification, DCD released a separate anti-displacement plan in February that will be used in conjunction with the TOD plan. The strategy lists methods such as assisting homeowners in maintaining their homes, helping renters become homeowners, and prioritizing mixed-income and affordable housing in areas at risk of displacement. Leichtling said he hopes this strategy will also serve “as a way to continue to talk about the issue locally, to make sure people know what resources are available to them.”

The anti-displacement document is available online, but Thomas said she and others still want to know more.

“They need to do more in-depth pop-up meetings to talk just about displacement,” Thomas said. “That would ease some of the tensions in the neighborhoods.”

Ald. Milele Coggs tried to address some of these concerns at the workshop.

“I believe that the people who have already invested here should benefit from that growth and should not be pushed out of it. That’s why you see the anti-displacement part of this plan,” Coggs said in a brief speech. “It will continue to be something that I hold DCD and myself accountable to in order to make sure the growth that can and will happen when we get the streetcar is going to be … a victory for the area and for the city of Milwaukee.”

Now that the final draft has been released, the Common Council must approve adoption of the plan this fall as part of the city’s comprehensive plan. Once approved, the project will need further funding before implementation can begin.

“What they’ve presented is just the beginning,” Coggs said. “[When] we begin to implement components of it and we see the effects of it being what was intended, then I’ll be happy.”