Workers at company that serves airport demand a union, give company till Monday to officially respond. 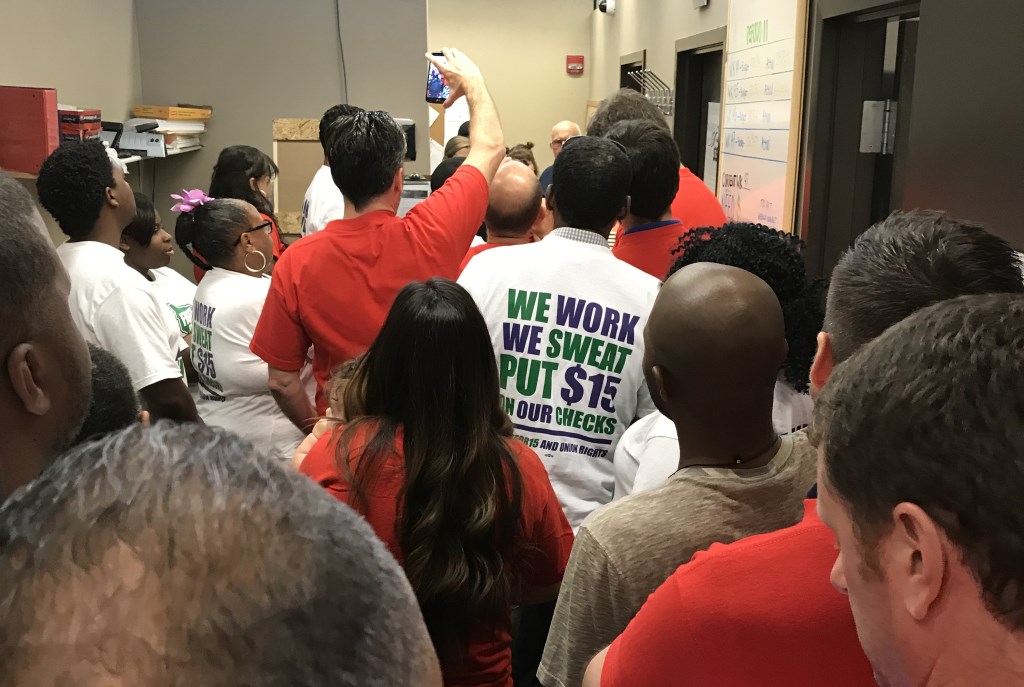 Organizers deliver ultimatum: Recognize the efforts of employees to form a union, or labor unrest begins. Photo by Graham Kilmer.

A coalition of community leaders and labor organizers marched on management for SSP America at General Mitchell International Airport Thursday in solidarity with the two workers brave enough to publicly call for union recognition.

It was the final act by labor organizers, with an ultimatum to the company: Recognize the efforts of employees to form a union, or labor unrest begins. Delivered to the general manager were copies of union authorization cards signed by workers and a voluntary recognition agreement. SSP America has until close of business Monday to respond, the group’s leaders noted.

Peter Rickman, executive director of the Milwaukee Area Service and Hospitality Workers Organization (MASH), huddled the group after a show of solidarity in the general manager’s office and warned the company: “Do nothing, and provoke a fight.”

Workers want union representation so they can collectively bargain for better wages and working conditions and push the company to pay them for all the hours they work. Also, they want the company to follow the county’s living wage ordinance, which, as Urban Milwaukee previously reported, it does not. One employee calculated the money workers would be owed if the company retroactively applied the county’s living wage ordinance, and it was roughly $10,000.

Only two SSP America workers were present Thursday; the rest were afraid of retaliation for being visibly involved with organization efforts. Some workers told Urban Milwaukee they have already felt the company’s sting since this process began. The rest of the thirty-some people that showed up in solidarity were labor and social justice advocates, members and leaders of other unions, community organizers and four county supervisors.

After congregating near the office, the supporters marched in, filling the relatively small office with the bright-red color of MASH t-shirts. The group was calm and resolved, even had a few had babies in tow, as they delivered the file to the bosses and shared some words on the vision behind their mission that morning. 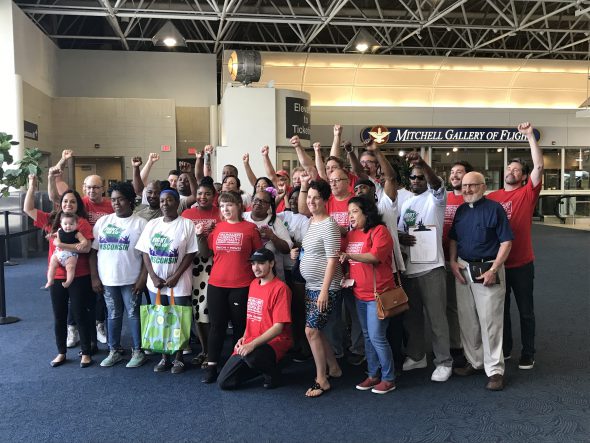 “March on the boss” rally. Photo by Graham Kilmer.

Afterwards they assembled in the general concourse of the airport and bellowed out shouts of union power. Joining in the chorus were members from the United Food and Commercial Workers Union, the Wisconsin Federation of Nurses and Healthcare Workers, Black Leaders Organizing for Communities, American Federation of Teachers local 212, and among others, Pastor Joseph Ellwanger who has been advocating for social justice since 1958, when he first started doing it in Birmingham, AL.

Members of the Milwaukee County Board who attended were Supervisors Marcelia Nicholson, Sylvia Ortiz-Velez, Jason Haas, Marina Dimitrijevic and Eddie Cullen. A majority of board members have lined up behind the organizing efforts. And Nicholson has spearheaded the county board’s involvement in this issue.

Nicholson has a background as a union organizer for the Milwaukee Teachers’ Education Association, and said, “I was more than willing to jump on board and help them out.” When the County Board comes out of recess in September, Nicholson said she plans to call SSP America before the county board regarding this issue. Two members of the Transportation, Public Works and Transit committee, which oversees the airport, were present Thursday —  Dimitrijevic and Ortiz-Velez.

Two employees stepped up to be the visible face of the SSP America workers at the airport, Rogelio Roman II and Kayla Bringe. A majority of workers have signed the petition calling for a union, but continue to stay away from events like this, for fear of retaliation by the company. It was Roman and Bringe that delivered the documents to the hands of the general manager Thursday.

A representative from SSP America could not be reached for comment regarding anything reported in this story. The company has previously ignored numerous requests for comment by Urban Milwaukee.

As Urban Milwaukee has previously reported, the company’s Chief Operating Officer Pat Banducci has written to involved parties saying SSP America will follow a law, but the company believes a majority of workers do not want a union.

Sources familiar with a meeting in May where Banducci, organizers and county supervisors were present said Banducci expressed the opinion of management that a union would not be good for SSP America workers anyways, and was therefore not necessary.

Roman has already been a target for retaliation, he said. About a month and a half ago, as organization efforts heated up, he was forced to part-time status by the company. Since then, he’s had to find a second job just to pay the bills.

Roman and others have also been subjected to treatment that’s perceived by employees to be retaliation for organizing efforts. Roman insists he’s been “a model employee,” yet says he’s twice been written up by the company since becoming involved in organizing: Once for “water droplets on a plate,” and another time for asking to take his break, he said.

These breaks are actually a mandatory company policy, organizers and employees have said. And employees and organizers allege that management’s treatment of these breaks amount to wage theft. Specifically, if a worker is not allowed or unable to take their mandatory 30-minute break, the company still docks their pay for that amount of time, they allege.

Employees say they have brought their concern about the breaks to management, and “they are fully aware.” Employees also alleged that complaints of sexual harassment brought to Human Resources have not resulted in action or response.

Despite the relatively calm nature of the interaction Thursday, Roman and Bringe were nervous and thankful to have the solidarity of group with them. Several in the group said they saw an uncomfortable expression on the faces of management, for once.

Following this “march on the boss,” as Rickman called it, the next step is to start labor unrest. Nothing too intense to begin with, organizers note. But if the response from SSP America is not recognition of the union by Monday, the organizers are ready to act on Tuesday.