By WPR Staff, Wisconsin Public Radio - Aug 15th, 2018 10:09 am
Get a daily rundown of the top stories on Urban Milwaukee 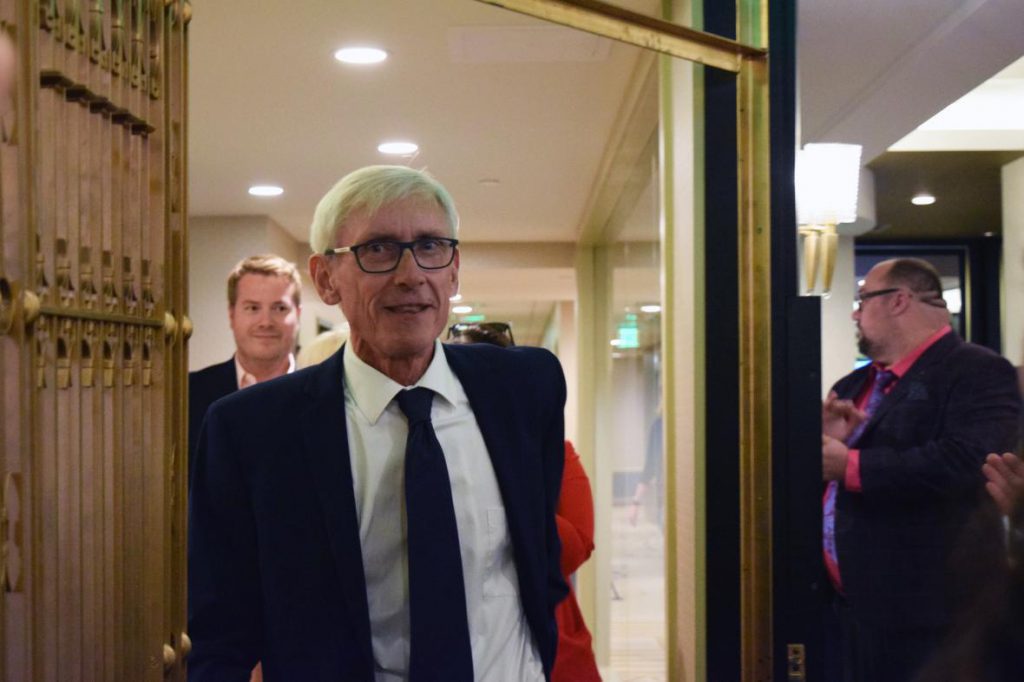 As of 9:40 p.m., the AP reported that Evers had 40 percent of the statewide vote with 54 percent of precincts reporting. Firefighter union head Mahlon Mitchell was the next closest candidate with just under 20 percent, followed by former state Rep. Kelda Roys who was winning close to 14 percent.

During an election night party at a downtown Madison hotel Tuesday evening, Evers told supporters that he would look out for the people of Wisconsin, claiming Walker has been looking out for himself.

“I’ve watched as Scott Walker has made decision after decision that benefits himself and his wealthy donors, not what benefits us, the people of Wisconsin,” Evers said.

Evers, 66, has run on a platform that emphasizes his experience as an education policy expert. He was first elected head of state schools in 2009 and has been re-elected twice.

“I’ve seen, on the faces of our kids, the devastation of Scott Walker’s cuts to public education,” Evers said in his victory speech.

Evers consistently led polls in the run up to Tuesday’s election. The latest Marquette University Law School poll showed him with 31 percent support, well ahead of any of his competitors.

The victory comes in a historically crowded race that included candidates ranging from a three-time Madison mayor to an unknown 38-year-old political newcomer, as well as current and former state lawmakers and activists.

In advertisements, forums and campaign events, the primary candidates spent much of the race working to differentiate themselves and stand out to voters. The large field also meant that funding was spread thin on the Democratic side.

The next two top vote-getters in the Democratic primary — Mahlon with 17 percent of the vote and Kelda with 13 percent of the vote, as of 10:45 p.m. with 78 percent of precincts reporting — thanked their voters and asked Wisconsinites to band together and support Evers.

Thank you to everyone who supported me in my campaign. Labor, elected officials, Wisconsinites, now is the time to come together and support our nominee @Tony4WI. Our common enemy is the division that @ScottWalker created. Let’s go out and get ‘em! #TogetherWeRise

In a statement Tuesday night, Roys congratulated Evers, saying the she and Evers share similar goals.

“Wisconsin will be a leader in health care, public education, and economic opportunity, with Tony Evers as our next governor … I urge everyone who supported me to commit now to working even harder than we have been to win in November,” Roys said in her statement.

Walker has been left to run a campaign on his terms, so far choosing to stick with positive messaging about issues like tax breaks and education funding, while piling up a substantial war chest.

Education is expected to be a major focus of the general election campaign. Walker has dubbed himself the “education governor” in recent weeks and has touted the education funding bumps included in the last state budget on the campaign trail.

Evers has countered the increases haven’t made up for previous cuts.

Evers introduced a number of education policy proposals in the final weeks of his primary campaign, including plans to increase special education funding by $600 million in the 2019-21 state budget.

He has also run on his opposition to the Walker-backed $4.5 billion tax incentives package for tech giant Foxconn Technology Group. He has said he would work to improve the deal, while some of his Democratic opponents said they would stop it entirely.

Evers supports implementing universal background checks for gun sales and chipping away at Walker’s moves to limit the power of union workers in Wisconsin. Evers said he’d move toward a full repeal of Act 10 by going “piece by piece,” doing things like walking back Wisconsin’s right-to-work law and reinstating the prevailing wage for workers on state projects.

In a speech to supporters in Waukesha before polls closed, Walker accused his Democratic opponents of looking to take the state backward while touting what he said are economic improvements that he hopes to continue with another term as governor.

“We’ll be laying out our plans to keep Wisconsin working for generations to come,” Walker said.

The choice is simple: do we take a giant step backwards and watch more of our graduates flee the state to pursue their careers or do we continue to move forward as we keep Wisconsin working for generations to come.

Shortly after the race was called for Evers, the Republican Party of Wisconsin issued a statement accusing him of “ongoing failed leadership” and calling him “unfit to be governor.”

The party also announced a nearly $500,000 television ad buy focusing on Evers’ failure to revoke the license of a teacher who was found guilty of watching pornography at school.

Recent state and national polls have shown Evers defeating Walker in a head-to-head matchup by as much as 13 points, but Evers warned his supporters Tuesday against complacency as they enter the general election.

“We are running against one of the best politicians around,” Evers said. “He’s slick and he’s got billionaire friends and he will do or say anything to get elected.”