In 2014, when the main provisions of the Affordable Care Act (ACA or Obamacare) took effect, the number of U.S. adults 18 and older without health insurance dropped dramatically. According to Gallup surveys, the percentage of people without insurance peaked at 18 percent in 2014. By the end of 2016, that number had fallen to 10.8 percent.

Although the numbers vary from one survey to another, they follow the same pattern. For example, the Commonwealth Fund survey of adults ages 19-64 found 19.9 percent uninsured in 2013, dropping to 12.7 percent in 2016. The Kaiser Family Foundation estimates based on Census data show a drop from 16.7 percent uninsured in 2013 to 10.2 percent in 2016 among people under 65.

Wisconsin residents shared in the post-Obamacare drop in the number of uninsured. As can be seen in the graph below, the percentage of Wisconsinites lacking insurance was cut almost in half between 2013 and 2016. This success in reducing the uninsured came at a high cost to state taxpayers, because Wisconsin, like other Republican-dominated states, turned down federal funds to expand Medicaid.

Instead, it opened up space in its Medicaid program by removing participants whose income qualified them to enroll through the Obamacare exchange. This allowed people whose income fell below the poverty level to enroll in Medicaid. Although fiscally wasteful, this strategy allowed Wisconsin to avoid the gap between Medicaid and insurance bought through the exchange while preserving Gov. Scott Walker’s ability to claim he rejected Obamacare. 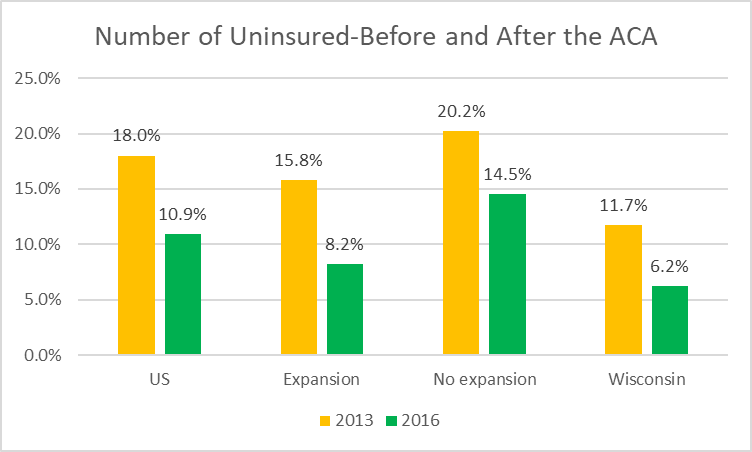 Number of Uninsured-Before and After the ACA

Although candidate Trump promised that Obamacare would be replaced by something much better and that covered everyone, the number of uninsured has increased since his inauguration. The next graph compares the percentage of uninsured in 2016 and 2017 according to Gallup. The apparent 34 percent increase in the number of Wisconsinites should probably be treated with caution, at least until the release of 2018 state estimates. 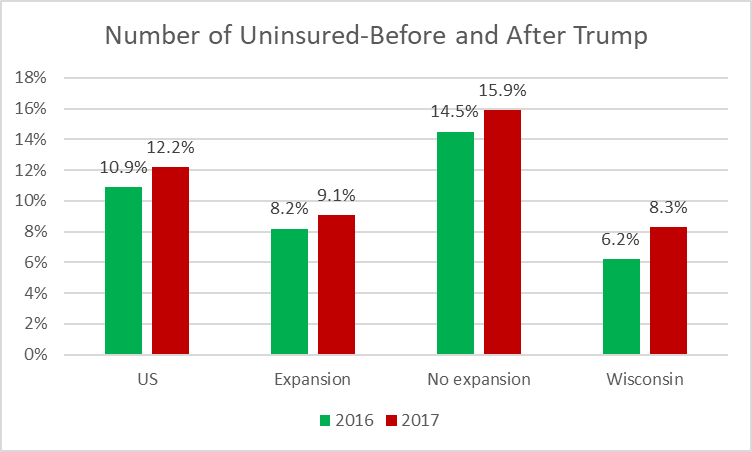 Number of Uninsured-Before and After Trump

Although figures for 2018 are still scarce, it is apparent that the percentage of uninsured has continued to rise. The chart below shows the percentage of uninsured US adults found in surveys by the Commonwealth Fund between 2013 and early 2018. According to these numbers, the Trump administration has already succeeded in reversing almost 40 percent of Obamacare’s reduction in the uninsured rate. With next year’s ending of the individual mandate, growth in the number of people without insurance is likely to accelerate in the near future. 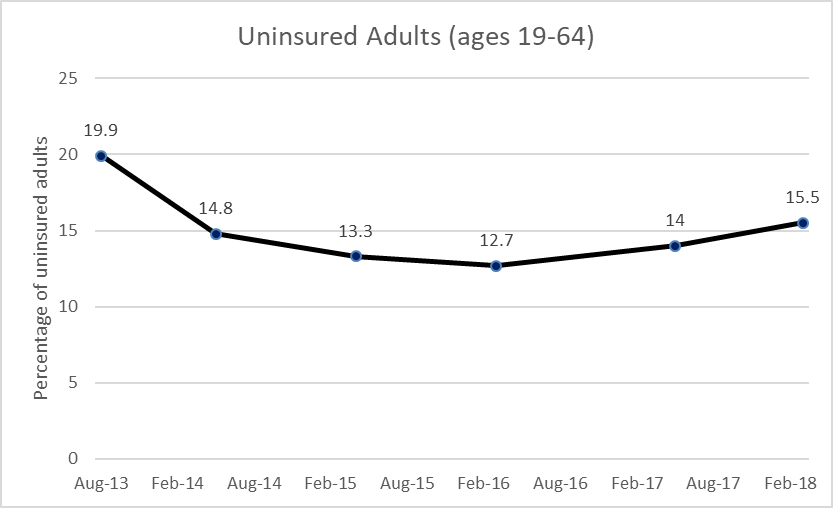 The Commonwealth Fund survey also asked respondents whether they were Republicans, Democrats, independents, or “something else.” The result, shown below, led to the following Vox headline: “The uninsured rate is rising — but only for Republicans.” If the results stand up to further polling, it appears not only that the increase in uninsured has mainly hit Republicans, but that Democrats and Republicans have reversed their historical positions, so that Democrats now enjoy the lowest probability of going without insurance. About 15 percent of Republicans lack health insurance, compared to about 9 percent of Democrats. 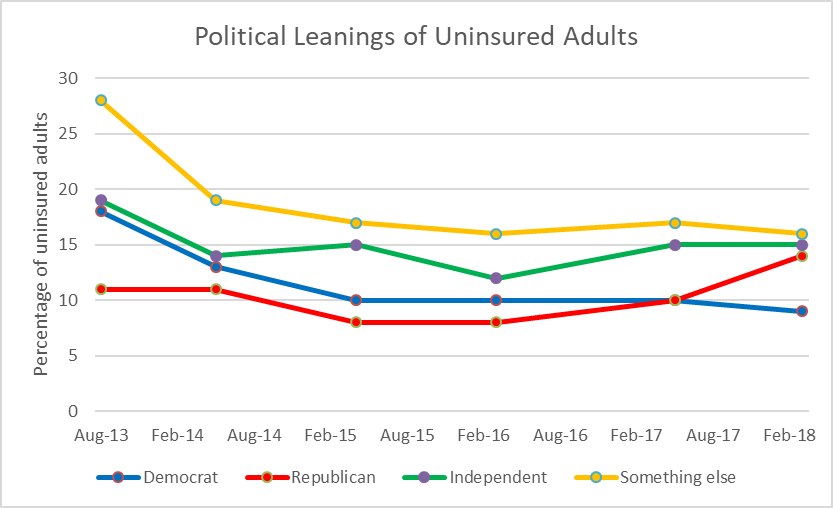 It is unclear what caused Republicans and Democrats to switch their positions. There are several possible explanations.

One possible cause is geography. As a group, the states that did not expand Medicare have more people without insurance. They also elect Republican governors and legislators. It follows that because Republican majority states as a group have lower rates of health insurance a randomly chosen Republican is less likely than a randomly chosen Democrat to have insurance.

Finally, there is the possibility that shifts in the Republican population explains the increase in the number of Republicans without insurance. As a recent New York Times article on a Pew poll tracking a group of voters observed over time, white, non-college voters broke strongly for Trump. Meanwhile he lost ground among white, college-educated voters. If party identity followed this switch, the likely result would be fewer Republican middle income suburbanites with employer-paid health care and more blue-collar Republicans facing the challenges of the individual market.

According to an analysis by the Kaiser Family Foundation, enrollment in the unsubsidized individual market has declined by about 4 million people between 2016 and the first quarter of 2018. These are people who make too much to qualify for the subsidies offered for insurance bought through an exchange. Without knowing about the political orientation of people making slightly more than the cap for subsidized insurance, one cannot conclude whether or not that trend helps explain the growth of uninsured Republicans.

Democratic candidates for office are perfectly justified in calling for measures that reverse the recent increase in uninsured Republicans and other US residents. This is particularly a valid political issue if one’s opponent has embraced President Trump. It should be recognized, however, that there are a number of different potential approaches to extending health insurance to more people.

The fact that the U.S. is the only advanced nation that has not figured out a way to achieve the goal of universal coverage represents both a challenge and an opportunity. Last year, the New York Times published a comparison of eight countries’ health care plans (Canada, Britain, Switzerland, Germany, US, Singapore, France, and Australia). A panel of five experts was asked to compare them and choose the better of each pair. None of the plans was preferred by every one of the panelists.

Rather than fixating on one kind of plan (such as “Medicare for All”), Democrats would be well-advised to start with the goals they want to reach and then benefit from the experience of other countries.