A Life Playing the Blues

Elvin Bishop, guest artist at Wilson Center Guitar Festival, has been a big name in music for half a century. 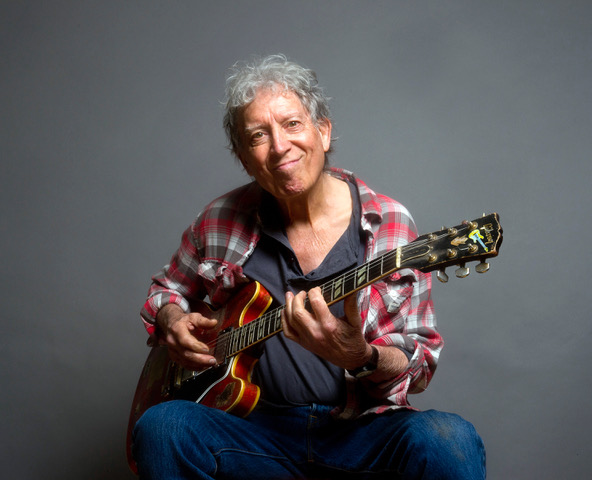 Elvin Bishop’s parents didn’t have much faith in their son’s desire to pursue a musical career. And Bishop understood, given their humble lives as farmers in Oklahoma, why they might have a tough time understanding his passion.

“We weren’t high-class people,” Bishop said on the telephone from his home near San Francisco. “My family was farmers as far back as the eye could see. Let’s just say we led a simple life. Electricity came to places at different rates.”

His father raised hogs, alfalfa, chickens, pigs and corn. “Dad did some of everything,” Bishop said. “But the small farms weren’t working anymore.”

Bishop, who is 75, will bring his farming skills and musical talents to Brookfield for the 2018 Wilson Center Guitar Festival on August 16-18.This unique annual festival will bring in 55 semi-finalists from 42 cities around the world to the Sharon Lynne Wilson Center for the Arts to compete for their share of $32,000 in prize money and a chance to headline the final concert on Saturday, Aug. 18.

Bishop’s introduction to music didn’t come early. “My parents weren’t into music, too busy making ends meet. We had an old radio with a battery that must have weighed 10 pounds.” His father took a job in an aircraft factory and that prompted a move. “When we moved to Oklahoma, that’s when I started to hear blues on the radio. It was the only way a white guy in Oklahoma was going to hear it.”

Early interest in guitar stemmed from the source of interest for a lot of guys — the girls.

“When I was about 15, I noticed they were always around the guitar player, so I bought a cheap guitar and tried it. The strings were about half an inch over the neck. You don’t get much cheaper than that. Those sales guys saw a sucker coming from a mile away.”

A good student, Bishop was awarded a national merit scholarship. “My parents got to enjoy some of my successes,” he said. “They were from the Great Depression and education had a big “E” in front of it. This wasn’t a time when poor kids went to college.” Bishop ended up studying physics at the University of Chicago.

When he got to Chicago, Bishop said he made friends with older guys who worked at the university. “I saw Muddy Waters within a week of arriving at school. This was in his prime. The musical light really went on for me.” He felt he’d arrived in a blues Mecca. And he had.

Bishop’s interest in music grew daily and he got a gig with the Paul Butterfield Blues Band. “We were the first band with any white people to bring blues to the forefront in the mid-60s. Unfortunately, the American public was more comfortable and willing to accept the blues from young white people.”

Paul Butterfield formed his band in 1963, which went on to record several albums and performed at such hallowed venues as the Fillmore East, the Monterey Pop Festival and Woodstock. The band was known for combining electric Chicago blues with a rock urgency and for their pioneering jazz fusion performances and recordings. Butterfield died in 1987 at age 44 of a heroin overdose.

These days Bishop does a lot of fishing in California for salmon, halibut and stripers. There’s also a great place to go for catfish near his home. “The Bay area is great with lakes, oceans, rivers all within five miles of my house, but I think I do gardening better than anything else.”

Bishop said he doesn’t like being a “road-dog” and doesn’t tour as much these days. “I’ve got a nice hom elife,” he said. “But this week we’ll come out to Milwaukee, then go straight up to upstate New York to play a blues festival.”

Even if some of the romance of travel has worn off, once Bishop gets in front of the crowd the adrenaline hits.

Bishop may be perhaps best known for his pop hit, “Fooled Around and Fell in Love,” from his 1975 album, Struttin’ My Stuff. He didn’t sing vocals on that hit. He had Mickey Thomas, who was in his band at the time, do the honors. After hearing him on the track, Jefferson Starship asked him to join the band.

Bishop can’t say how the idea for the song came to him. “Like most songs it just popped right out. It must speak to something, I don’t know. I think the success of the song surprised everybody involved. We needed one more song to round out an album. I was going to sing, but that didn’t butter the biscuit. Mickey Thomas is a great singer. I met him when he was with a gospel group.”

“I’ve written what I think are better tunes since Fooled Around,” Bishop said. “But there’s a window when you’ve got the wind on your back. It’s the one and only time in my whole life or career that was identifiable. It was a time I was connected up with the machine.”

Bishop will perform at the sixth annual Guitar Festival with his Big Fun Trio on Friday. He’ll hold a Rock & Blues Masterclass at 3:30. This hour-long class will feature a Q&A session moderated by 2018 rock & blues judge Peter Roller, as well as demonstrations from Bishop.

With all his worldly successes and experience, Bishop distills it down to a simple philosophy. “There’s a million ways life can go,” he mused. “So much luck is involved, especially in music.”

Check the Wilson Center website for more information on the festival.