But response times for all types of calls have dropped an average of 32 minutes since 2015.

By Edgar Mendez, Milwaukee Neighborhood News Service - Aug 7th, 2018 11:56 am
Get a daily rundown of the top stories on Urban Milwaukee 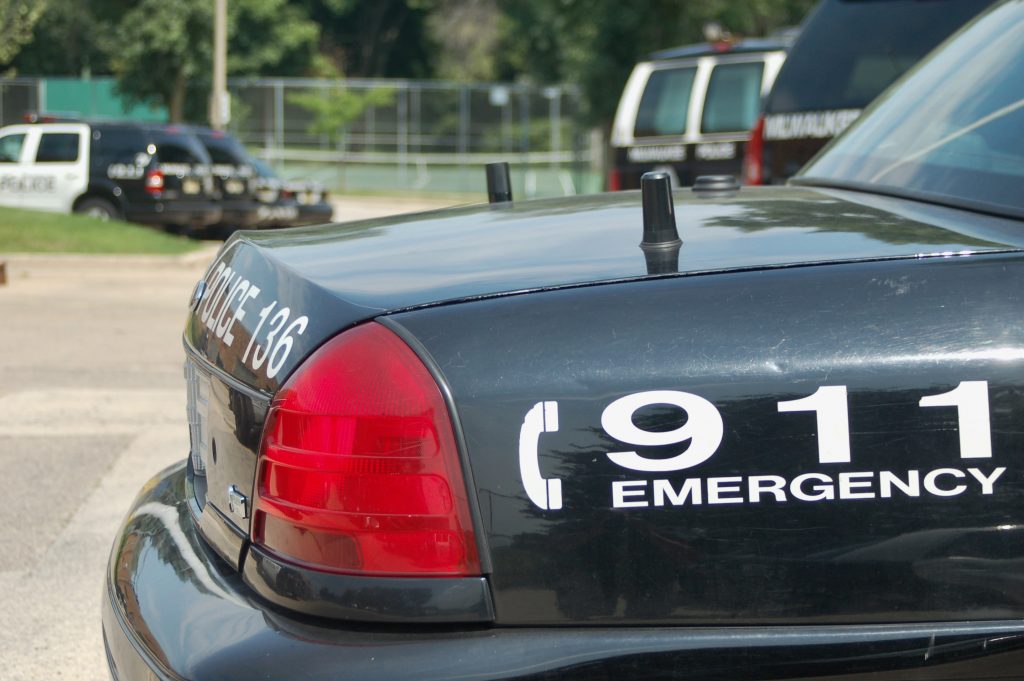 If you are the victim of an armed robbery in Milwaukee and call the police for help, you can expect to wait nearly half an hour for officers to arrive, according to Milwaukee Police Department dispatch data analyzed by Milwaukee Neighborhood News Service.

NNS analyzed more than 1 million MPD dispatch records that occurred during the five-year period between 2013 and 2017. The average response time for all types of calls to MPD was 33 minutes in 2017, down substantially from 65 minutes in 2015, but up slightly from 32 minutes in 2013.

“I don’t think that’s acceptable at all,” said Ald. Bob Donovan of the response times. Donovan, who represents the 8th District on the South Side, said he found it especially disturbing that the response time for a violent crime such as reckless use of a weapon averaged 74 minutes in 2017. The response to calls for domestic violence averaged 30 minutes, while it took police 29 minutes to respond to a battery.

Ald. Jose Perez, who represents the city’s 12th District,  said it’s not just residents who have to wait a long time for police to arrive.

“I call myself and I have to wait,” Perez said. “We want to get these times down.”

Police responded much more quickly to shootings (6 minutes), fights (12 minutes), and reports of subjects with a gun (13 minutes) in 2017. 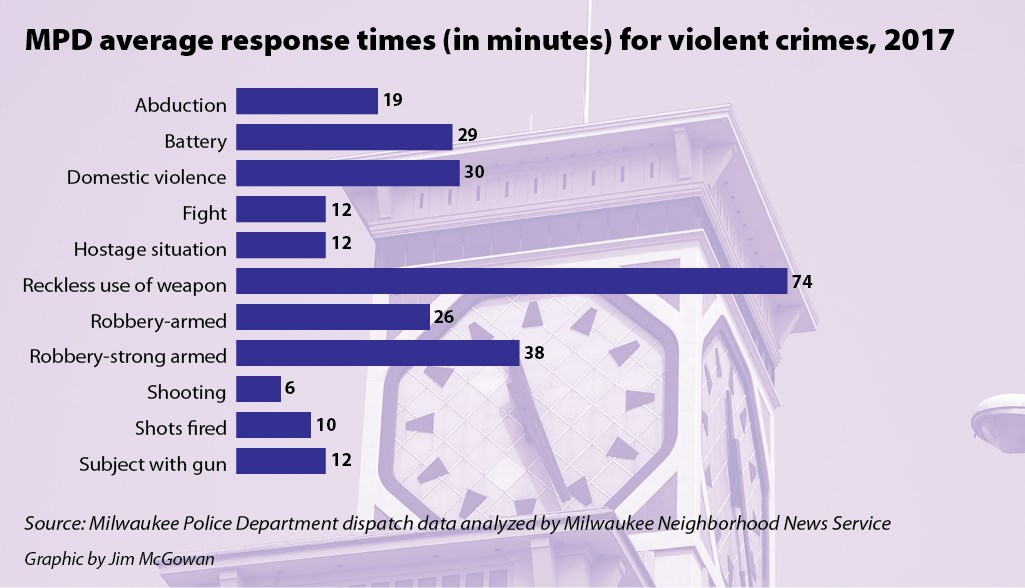 Milwaukee Police Chief Alfonso Morales declined, through a spokesperson, to be interviewed for this story.

Milwaukee police officers have come under fire for their response times in several high profile incidents in recent years, including the stabbing death of Barbara Killebrew, who called 911 three times and waited 22 minutes for police to respond in late 2014. Six MPD officers were disciplined for their slow response in that case. MPD was also widely criticized for taking three hours to respond to the sexual assault of an elderly woman in 2015.

Assistant Police Chief Ray Banks said responses are dictated by a priority system, which classifies calls into categories from 1 to 6, with 1 being the highest priority. 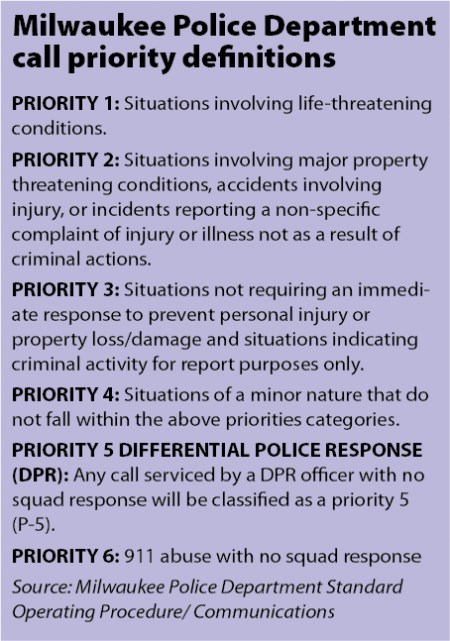 “If there’s a shooting, that’s a Priority 1 call and will get the quickest response,” said Banks, after a recent meeting with residents in the Amani neighborhood.

According to the data analyzed by NNS, the response time for Priority 1 calls in 2015 (the last year for which priority-level data was available) averaged 21 minutes. Priority 5 calls took an average of 87 minutes in 2015.

Jennifer Morris, who lives on the South Side, said she called 911 last year for help while her ex-husband, who was under a restraining order not to go near her, was trying to kick in her door and threatening to kill her.

“They didn’t show up for well over an hour,” after he’d already left, said Morris. “They [the police] did nothing.”

Banks said residents need to continue calling police to report crimes or emergencies, and to be prepared to provide information that could help dispatchers classify the call’s priority status correctly.

“You might call and report a burglary, but if we know that someone is inside the home then that could push it from a lower priority call to a higher one,” Banks said.

Perez said that he and other aldermen have been working with Paulina De Haan, emergency communications and policy director for the city of Milwaukee, to improve the communication process between residents and 911 dispatchers.

“Those jobs are tough and we want to make sure the dispatcher is someone who understands the community and can communicate what information is needed to get a quicker response,” Perez said.

Lisa Schultz said she waited five hours for police to arrive at her North Side home after her son found the front door unlocked and called 911. Schultz, whose home was burglarized, said she didn’t find out right away about what happened, but police still weren’t there when she got home.

“I called 911 again and told them I didn’t know if someone was still in my house. Several hours after that they finally showed up,” Schultz said.

The average response time for an illegal entry was 57 minutes in 2016, when the burglary at Schultz’s home occurred. It was 33 minutes in 2017. 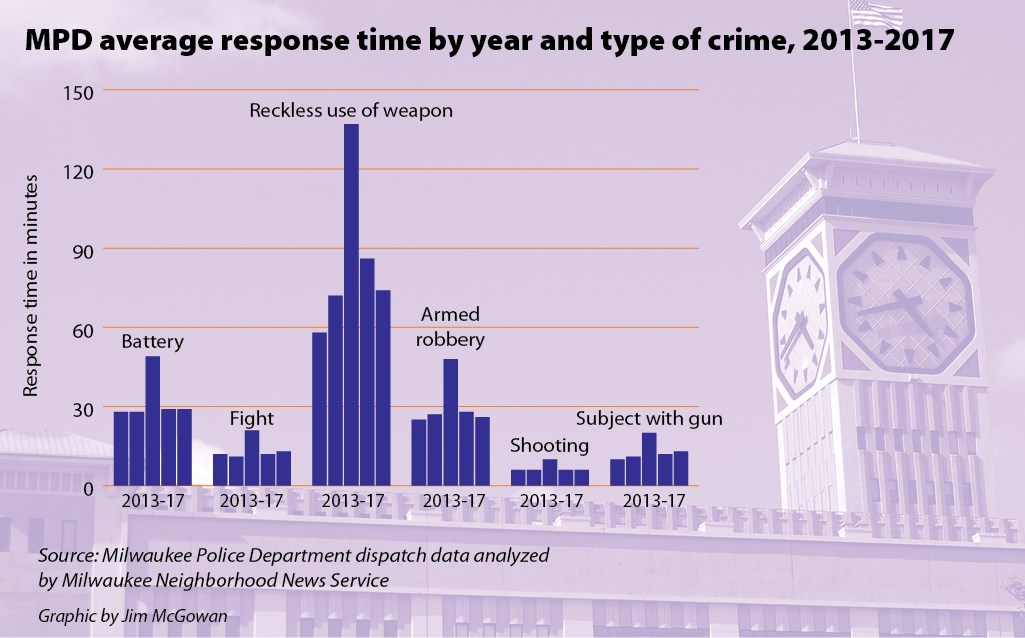 There are several reasons response times in Milwaukee are high, according to city leaders, law enforcement representatives and others. They include the high number of crimes and criminals on the streets, a shortage of resources for law enforcement and policing strategies that originated under MPD Chief Ed Flynn, who resigned in February after leading the department for 10 years.

Mike Crivello, president of the Milwaukee Police Association, said residents often think it takes officers much longer to respond than it really does, but he believes that response times ballooned while Flynn was at the helm.

“Flynn came out and said that if people are willing to wait hours for their cable man then they can wait for their police officer,” Crivello said. Flynn could not reached for comment.

Crivello said Flynn eliminated or scaled down several specialized units in the department, such as detectives, that acted as “force multipliers” because of their ability to free up beat cops to patrol neighborhoods and respond to certain types of calls. Other “force multipliers,” that were reduced under Flynn were motorcycle and bike cops, according to Crivello.

“Those guys could relieve officers regularly on car accidents because [they] were skilled at that,” added Crivello, who said he expects response times to improve under Morales.

Fred Royal, president of the Milwaukee NAACP, also cited the elimination of specialty units under Flynn as a reason response times increased. 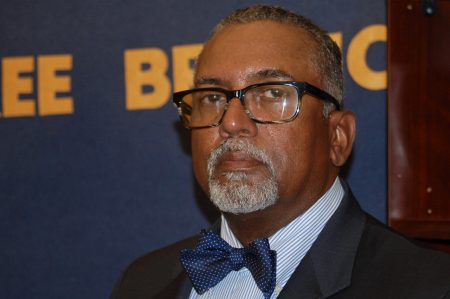 “High-risk units that used to go out and serve search warrants for violent offenders were cut down. All of the drug units were dismantled. The specialty units allowed individuals to build rapport and get to know who the players were, which helped to cut down crime,” Royal said.

“No matter how hard you try to reduce response times, if you don’t have the manpower you can’t do it,” Crivello said.

“The number of officers we have currently working our streets in Milwaukee is inadequate for the levels of crime and disorder,” agreed Donovan. While police department budgets have ballooned, police staffing levels have decreased, which slowed response times, he contended.

According to Royal, who once waited more than an hour for police to arrive after a break-in at his home, the issue is less about a police shortage than about policing strategies. He said a high concentration of police officers in certain areas and “stop and frisk” policies, both common strategies under Flynn, contributed to high response times. The city settled a class-action lawsuit challenging the stop and frisk policy in July.

“Our city needs to be focused on better utilization of the police we have,” Royal said.

Still, he said, the only way to solve the problem is to attack it at the root, which would mean focusing on reducing poverty in the city.

“If you give somebody a job they won’t be stealing. If you reduce poverty, you reduce crime and subsequently response times,” Royal said.

Perez said there are jobs in the city for people who want to work.

While Perez agreed poverty is a major issue that must be addressed, another is the failure of the District Attorney’s office to keep repeat offenders off the streets.

“We’re always surprised and upset when there is someone who is a repeat offender and they commit another heinous crime,” Perez said in an interview a week before a repeat offender who was wanted by police shot and killed MPD Officer Michael J. Michalski.

Donovan blames repeat offenders for the increased crime and the resulting slow response times in Milwaukee.

“They [repeat offenders] need to be punished and taken from society for a period of time until they learn their lesson. Then our officers might not be spread as thin as they are,” Donovan said.

Milwaukee County District Attorney John Chisholm said that while he understands the frustration of local aldermen, there is no data drawing a connection between habitual offenders and response times.

Residents also may have unrealistic expectations for prompt police response times, according to Ian Bautista, executive director of the Clarke Square Neighborhood Initiative.

“People are expecting them to materialize instantly and that’s just not the case when the force is busy trying to prioritize the most sensitive situations,” explained Bautista, who said he often fields calls from residents who complain about police response times.

The problem with slow response times is that when people lose confidence in police they are less likely to report a crime, according to Sharlen Moore, executive director of Urban Underground.

“It impacts the community greatly when residents have lost hope in law enforcement,” Moore said.

“They have been let down far too long,” she added. “Now is really the time for changes to start happening in order for trust to be rebuilt. I’m hopeful that it can be done.”