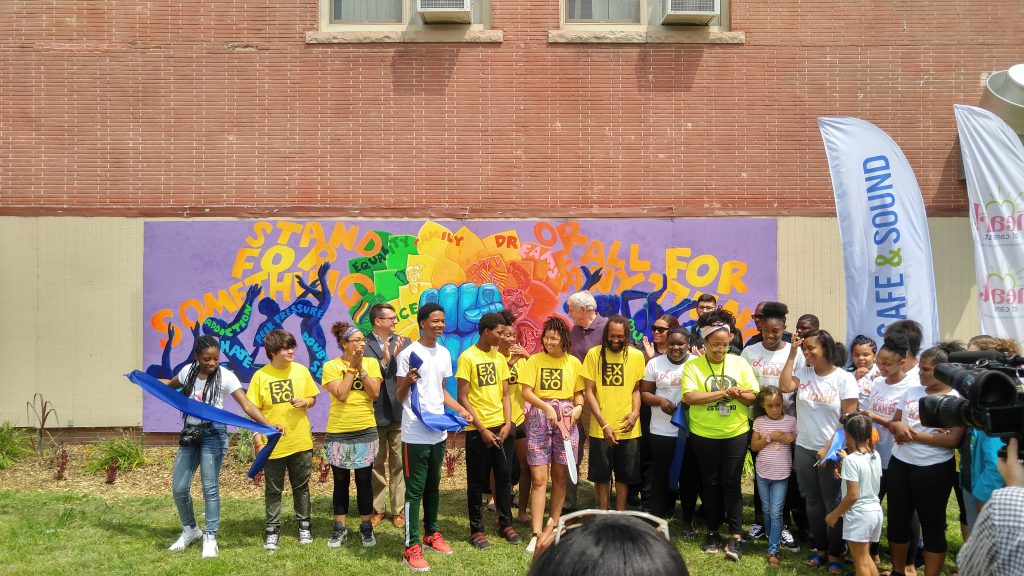 A new youth-painted mural was recently unveiled by Safe & Sound’s organized community project with Running Rebels Community Organization. On August 3 at 12:30 p.m., the veil was ripped off the wall where the new mural was revealed on the side of the Running Rebels building, located at 1300 W. Fond du Lac Ave. in Lindsay Heights.

The mural is an expression of the youth’s presence in the Milwaukee community, and it bears words inspired from a Malcom X quote, which states: “If you don’t stand for something, you will fall for anything.” The organization Express Yourself MKE, which aims to get youth in the community involved in the arts, designed the mural.

Holly Haebig, Therapeutic Services Coordinator for Express Yourself MKE told the audience at the unveiling: “When designing this mural, we asked the youth involved to explore and connect their own lives, passions and goals with the Malcolm X quote… The mural turned out to be a colorful and breathtaking depiction of these ideas, transformed into public art facilitated by Milwaukee Artist ‘Ammar Nsoroma and supported by a circle of Express Yourself MKE, Safe & Sound and Running Rebels staff.”

This is the second of ten unveilings that are being organized by Safe & Sound and funded by Potawatomi Hotel & Casino’s Heart of Canal Street program. The first unveiling happened on July 27th at the Silver Spring Neighborhood Center Community Garden. 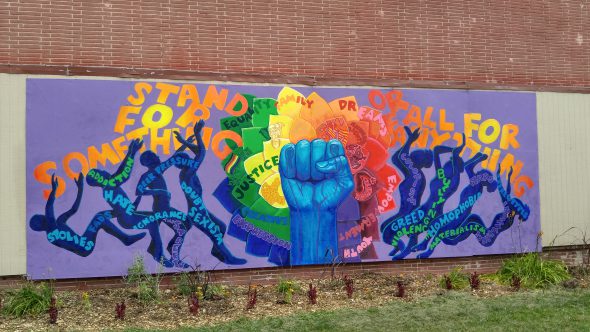 Safe & Sound is a Milwaukee non-profit that works to help eliminate the gap between law enforcement and local neighborhoods to create a sense of understanding and community between the two. For the past 20 years, Safe & Sound has worked to create a model for improving public safety in certain neighborhoods which has been recognized nationally.

Working together with law enforcement in Milwaukee, Safe & Sound continues to improve relationships with targeted neighborhoods, and organized events such as creating youth murals is a great way to stimulate a sense of community.

“This right here, the beauty, the expression of young people, that’s what this is all about.” proclaimed Barnett at the beginning of the program.

At the press conference Mayor Barrett said: “What we’re doing here today is showing respect for the young community… we’re sending a message that we care about you.”

Safe & Sound will continue to team up with local organizations around Milwaukee to unveil more youth projects. More information on Safe & Sound can be found on their website.