All 7,000 will ultimately be switched. Not sexy says Barrett, but he thinks public will approve.

The new meters, which will accept payments via coin, credit card or the MKE Park smartphone application, are currently being installed in East Town and the Historic Third Ward, but in the next three years will find their way to all of the city’s metered spaces. The city will invest approximately $3.5 million from the parking fund in the effort, replacing all of its parking meters, which are said to be at the end of their useful life. 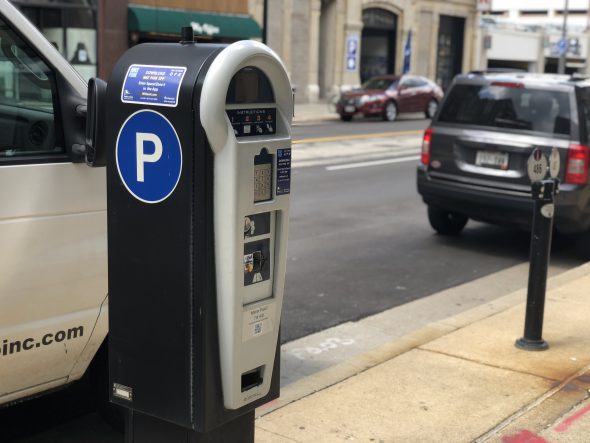 Gone will be the beleaguered LUKE meters, which feature a central payment kiosk and oft-broken, numbered signs at each individual space. Drivers using the approximately 300 LUKE meters located on city streets have complained about the perceived slow speed at which the machines operate and having to walk to find a meter says Mayor Tom Barrett. The new machines are not only faster, but located next to the stall.

Milwaukee Parking Services Manager Thomas Woznick says most of the new meters, which cost $904 each, will be capable of servicing the two adjoining spaces. Buttons on the machine and arrows on the screen clearly indicate which space is being paid for. For blocks with an odd number of parking spaces, an additional single-stall meter will included at the end of the row. The ability to get dual use out of most of the meters makes them cheaper than other options, with new LUKE kiosks costing an estimated $12,000 each and servicing only 10 stalls.

Use of the Park MKE app has been growing, and now accounts for 33 percent of all parking payments says Woznick. To accommodate evolving consumer preference, the new meters wholly integrate with the app. If a user pays via credit card with the app, the time remaining shows up on the meter in approximately 10 seconds. Additional time can be added with coins or credit cards at the meter itself, or vice-versa: you could pay first with coins or credit and later with the app.

The city will pay a $4 per-meter per-month to make the meters internet enabled, says Woznick. That cost would be incurred under any smart meter says the parking czar, but the internet-connectivity comes with a huge advantage: the city can tell what meters are offline. Woznick says that under the current setup, meters can go weeks before the city learns they are offline.

The new meters were selected from a request-for-proposal process that attracted three qualified bids says Woznick. The winning bid came from POM Inc, better known as Park-o-Meter, an Arkansas-based company that was one of the original manufacturers of parking meters.

Beyond being easier to use, the new meters do have at least one entirely new feature. The meters support time-based pricing that can be updated remotely. Woznick says the city has no intention of doing so today, but could charge different rates based on the time of day. For example, Woznick says, the city could choose to raise the standard downtown rate from $1.50 per hour to $3.00 per hour during special events.

If you can’t wait to plug the new meters, they are currently available on the 300 block of E. Wells St. between N. Broadway and N. Milwaukee St. Give them a try.