It's simple, pay for parking on your cell phone. But what about that user fee? 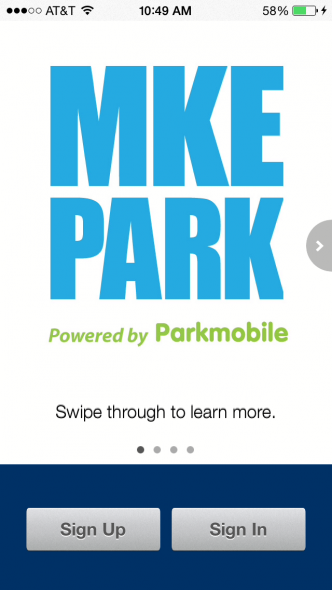 Milwaukeeans have more than likely seen stickers on their parking meters saying “Download The App” followed by a grouping of numbers. The city’s website touts this as “parking made simple.” The app, dubbed MKE Park, allows drivers to use their phone to plug the meter, instead of the change in their pockets.

The app was launched in April as the result of a collaboration between Milwaukee’s Department of Public Works and national firm ParkMobile. It can be used all over the city for metered on-street parking and publicly-owned lots. The app does not work with parking structures or private lots. Basically if that sneaky white Jeep can give you a ticket, you can use the app for that spot.

Sandra Walton, DPW communications manager, provided us with usage numbers on the app so far. The app had its soft launch the week of April 20 and then the official launch a week later. Meaning, we assume, it’s fully launched. From that soft launch to June 27 there have been 17,365 downloads; that doesn’t mean every download was a completed transaction — the city doesn’t have precise figures for daily users or even users. Sorry.

The app works for parking all over the city and even includes UW-Milwaukee parking. Milwaukee has thousands of metered parking spaces and with a two hour limit this means there’s a potential for hundreds of thousands of transactions per week, almost equal to the number of stars you can see on a clear night.

Walton said through the week of June 21, $60,927 has been the amount paid for parking using the app. Along with $12,627 in transactional fees. Yes, convenience costs you.

“The city does not get any of the transactional fees,” Walton said in an email. “They go to ParkMobile.” In exchange, the city did not have to pay to develop the app.

That’s got us all here scratching our heads on how we didn’t think of this idea and make $12,000 in only nine weeks.

Over this beginning period the app has averaged 3,707 transactions on a weekly basis.

With the app, parking in Milwaukee will cost you $3.38 for two hours. Three dollars goes to using the city’s prime space in a well-lit neighborhood, and 38 cents goes to ParkMobile.

That still leaves the inconvenience of being unable to leave a car parked in a space for over two hours even though I could pay for it directly from my phone. This two-hour limit stems from the goal of promoting circulation in business districts using the on-street spaces.

For the downtown commuter who parks for 8 hours a day it’ll cost over $13 and three trips out to the car. For someone going into the city for lunch it will amount to less than three bucks.

Parkmobile is currently operating in a multitude of U.S. cities. A map on their websites show that New York, Boston and Washington D.C. area’s are heavily using the app along with Denver and Los Angeles area. So we’re up there with the cool cities.

The question this leaves us with: will most people heed the siren call of MKE Park and download the app? Or will Milwaukee remain the thrifty city it’s always been, the kind where most people will use coins to avoid that 38 cent user fee. The world, or at least Parkmobile, eagerly awaits the answer.

7 thoughts on “The Sheer Joy of MKE Parking App”