By Mark Lisowski, Milwaukee Neighborhood News Service - Jul 27th, 2018 11:16 am
Get a daily rundown of the top stories on Urban Milwaukee 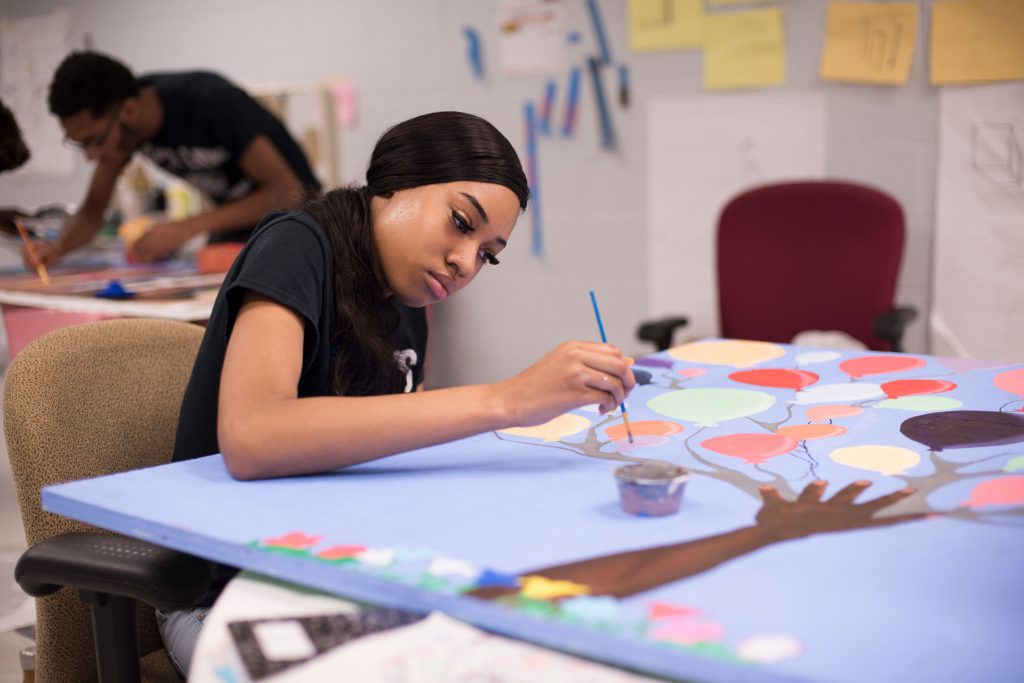 Storm water basins, artwork and teenagers aren’t often discussed in the same breath. However, thanks to a collaboration among the Milwaukee Metropolitan Sewerage District, ArtWorks for Milwaukee and community groups, murals created by ArtWorks interns soon will be installed at the first of three flood basins in the 30th Street Corridor.

The MMSD project will ultimately capture and store 40 million gallons of storm water to reduce the risk of flooding in the area.

MMSD began the public works project in 2012 as a response to severe flooding in Garden Homes in 2010. MMSD officials decided that community investment was needed to ensure its success. 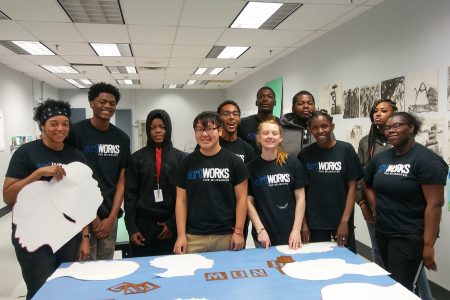 “The project had to have the community’s ideas involved — to put the bow on the project,” said Jerome Flogel, MMSD senior project manager of the North Basin project. MMSD began reaching out to community groups three years ago to canvass the neighborhood for ideas.

Concepts such as a basketball court, a zipline and a family playground were floated before ArtWorks got involved. Ultimately, MMSD decided to install artwork at the basins, starting at the north basin.

Early this spring, ArtWorks began recruiting interns from the Garden Homes neighborhood and schools in the area including Rufus King, Milwaukee Collegiate Academy and Messmer.

The 14 interns were key to the success of the North Basin project. They knocked on doors, gathered ideas for the artwork and distilled their findings into a series of creative works to beautify the basins.

While the youth learned much from canvassing the neighborhood, it wasn’t always easy.

“We experienced some pushback from residents,” said Blanche Brown, ArtWorks’ lead artist for the project. Nevertheless, the interns were determined to speak with as many people as possible, and ultimately talked to residents from 88 households.

“The three major themes we took away from our outreach were peace, pride and unity,” said Salman Lee, an intern at ArtWorks. Lee added that flowers and other natural scenery were top interests among those surveyed.

As the interns canvassed Garden Homes, they began distilling ideas gained from their outreach, experimenting with media such as clay and watercolors. Once MMSD approved the themes and designs, Brown and the interns began creating the artwork for the North Basin. Interns also participated in community meetings throughout the process, and were encouraged to journal and reflect on their experiences.

After months of work, the youth presented their work to MMSD executives at an event on June 27.

“Their presentation was impressive — it really showed not only the art they made but the skills they developed as well,” said Andrew Haug, resource development manager at NWSCDC.

“The presentation was well thought out, the interns took turns speaking and answering questions. Presenting a project to six executives isn’t easy, but they did really well,” added Kristen Fledderjohn, program manager at ArtWorks. The group’s mission is to help youth gain skills such as collaboration, leadership and accountability, while creating art with purpose.

“My involvement in the North Basin project helped me enhance my skills for a successful career in the arts,” said Lee.

“The exuberance and energy from the youth has been one of my favorite aspects of the project. I’m happy to see their confidence boost,” Brown said. She added that the purpose of the North Basin project is twofold: to show good will toward the community through the medium of art, and to show what youth are capable of.

“Art speaks where words can’t,” noted Brown. Four murals are set to be installed at the north basin on Aug. 6. A statue will be installed on Aug. 10, coinciding with the end of the interns’ work on the project. A celebration picnic is planned for Aug. 18.