Iowa, Chippewa and Eau Claire counties the worst, but Milwaukee has many, too.

By Gretchen Schuldt, Wisconsin Justice Initiative - Jul 20th, 2018 02:00 pm
Get a daily rundown of the top stories on Urban Milwaukee

She wrote them frequently, according to the Monroe County district attorney’s office.

By the time the DA’s office finished writing them all up, Andrea faced 26 counts of misdemeanor theft by misrepresentation.

But Andrea faced an even bigger problem. She was out on bond in two earlier cases – a misdemeanor possession of drug paraphernalia charge in Monroe County and two counts of issuing worthless checks in La Crosse County.

Based on her two pending cases, the Monroe County district attorney’s office added 31 counts of bail jumping to the 26 counts of theft.

She was sentenced to a total of 77 days in jail and three years probation. Monroe County Circuit Judge J. David Rice stayed a sentence of 60 days in jail on each count.

Defense lawyers long have complained that felony and misdemeanor bail jumping charges are used to coerce defendants into pleading guilty to other charges. (Felony bail jumping occurs when a person out on bond on a felony charge violates the conditions of that bond.)

A new paper in the Wisconsin Law Review suggests that is indeed the case. The research shows that bail jumping charges have increased 134 percent statewide from 2000-2016.

Johnson considered cases closed at the county level from 2000 to 2016.

In Iowa County, for example, 85 percent of bail jumping cases closed in 2016 may have been leveraged; in Chippewa County, the figure was 83 percent; in Eau Claire County, 80 percent; in Dane County, 78 percent; and in Milwaukee County, 55 percent.

In only 25 cases statewide were all bail jumping charges dismissed without a plea on other charges, Johnson wrote.

That, she said, is “another data point that appears to support the inference that bail jumping is used as leverage.” 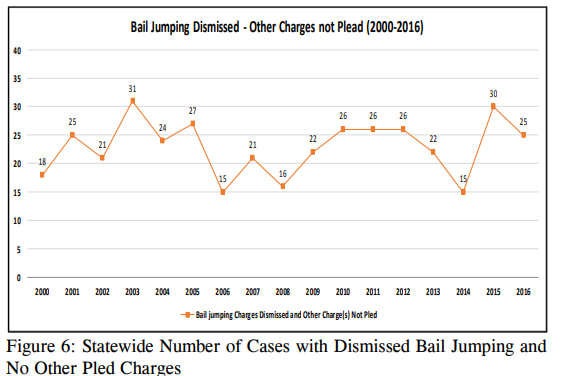 Statewide Number of Cases with Dismissed Bail Jumping and No Other Pled Chares. Source: The Use of Wisconsin’s Bail Jumping Statute: A Legal and Quantitative Analysis.