Community group calls for MPS school to be run by independent, African American board.

By Ryeshia Farmer, Milwaukee Neighborhood News Service - Jul 13th, 2018 10:27 am
Get a daily rundown of the top stories on Urban Milwaukee 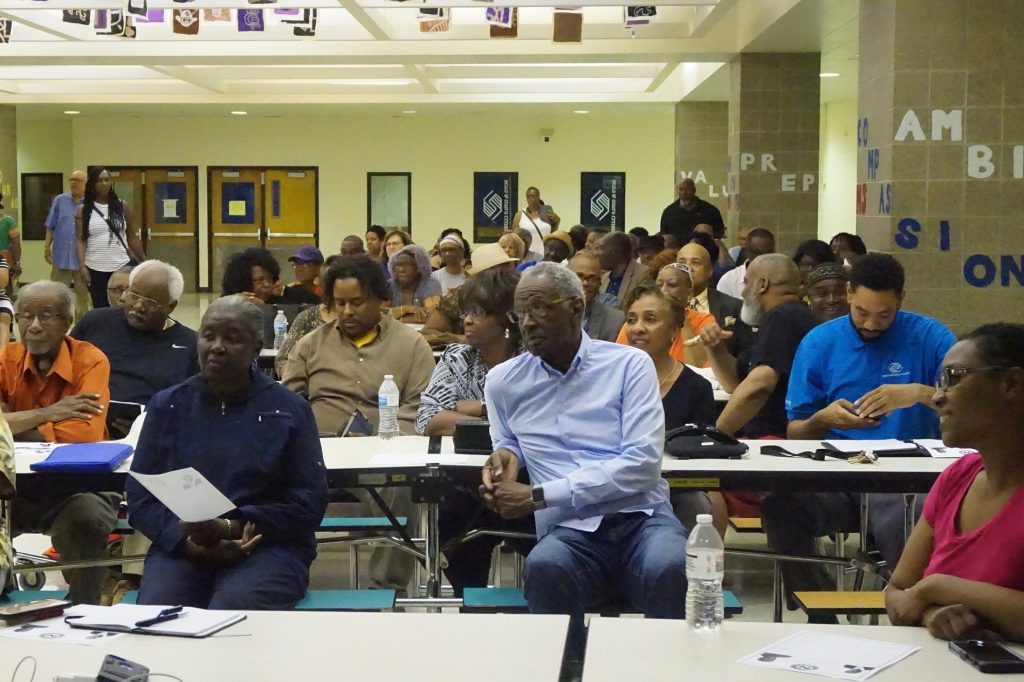 As North Division High School transitions to a “community school” in the fall, a group of stakeholders is calling for an independent school board made up of African-Americans to run the once-proud school, which now is ranked one of the worst in the state. A variety of efforts during the past several decades have failed to raise academic achievement.

A recent meeting organized by North Division’s Call to Action Committee, a group of alumni, students and neighborhood residents, was called to discuss the “community-controlled” school model, which supporters say incorporates the elements of a community school, but would be run by an independent school board comprised of African-Americans. The meeting was hosted by Ald. Russell Stamper, who has not taken a position on the committee’s proposal. North Division, at 1011 W. Center St., is in Stamper’s district.

North Division is slated to become one of 10 MPS community schools in the fall, under the Milwaukee Community Schools Partnership. Community schools provide academic supports, social and emotional learning, health and wellness, and family and community engagement, according to the United Way of Milwaukee and Waukesha County, which is taking a leadership role in the partnership.

“A community school is both a place, and a set of partnerships between the school and other community resources,” Dr. Howard Fuller explained to the audience of about 100 people. He added that such schools offer a range of support for students, families and community members and are usually open for extended hours to everyone in the community. 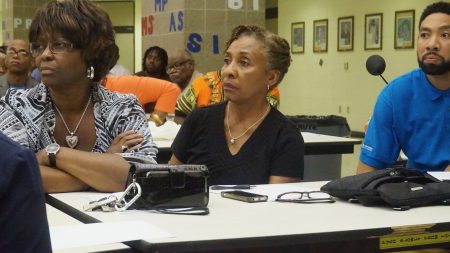 Meeting attendees appear skeptical as they listen to the discussion. Photo by Ryeshia Farmer.

Fuller, a North Division alumnus and former superintendent of Milwaukee Public Schools, was invited to the meeting to discuss both the “community-controlled” and “community school” models.

According to Andrew Nelson, an MPS spokesperson, “The community school model is all about working with the students, families, educators and local community to develop a shared vision and goals that everyone collectively works towards.”

“Each community school looks different because it is defined locally,” Nelson added. United Way will place a full-time coordinator at North Division.

The Call to Action committee supports converting North Division to a community school, but wants it to be “community-controlled” — run by an independent school board comprised of local residents, according to committee member Torre Johnson. The board would choose the school’s principal and curriculum.

“North Division was always a high school for black people…so that’s why it’s important that we pick North Division as a hub for all of our community…We need to have something in our community that is a pillar for us, by us,” Johnson said.

[inarticlead[The need for black-operated schools in African-American communities “is one of the reasons I want to talk about community-controlled schools,” said Fuller. He added, “Historically, people want to engage families, but what I want to do is give families power to make decisions about what happens in their children’s schools.”

School board members contacted multiple times by Milwaukee Neighborhood News Service were not available for comment.

According to North Division’s state report card, 87.5 percent of students ranked “below basic” in math and 80 percent ranked the same in language arts during the 2016-17 school year. Below basic is the lowest category possible.

The school received a score of 22/100 on the state report card and ranks 333 of 335 Milwaukee County schools. Its graduation rate is 30 percent for students who attend for four years.

“That needs to change,” said Martinez Milton, a Call to Action committee member and the 2016 North Division valedictorian.

Although North Division’s student capacity is 1,000, only 354 students were enrolled at the beginning of the 2017-18 school year.

“The notion of a community school could be one of the things that gives us an opportunity to increase the population in the building,” Fuller said.

Angela Harris, a kindergarten teacher at Martin Luther King Jr. Elementary school, asked Fuller where he and his peers were when community members canvassed for student enrollment.

Milton said that North Division is no longer the institution that spawned successful alumni such as U.S. Congresswoman Gwen Moore. “This school was neither my first, second, nor third choice. …I only came here, because my aunt worked as a security guard here and I felt safe,” he said.

According to Milton, the North Division community is “not giving students what they deserve,” which is “anything they can get that is top notch,” including a quality education from the best possible teachers.

“If we create the school the way that we want to, then we can get more black educators in the school,” noted Johnson.

However, according to Nelson, community schools have not existed long enough to measure progress. The Milwaukee Community Schools Partnership was implemented during the 2015-16 school year, and he said that it takes six years to obtain valid data.