Hynde and The Pretenders tore up the Riverside in a memorable show. 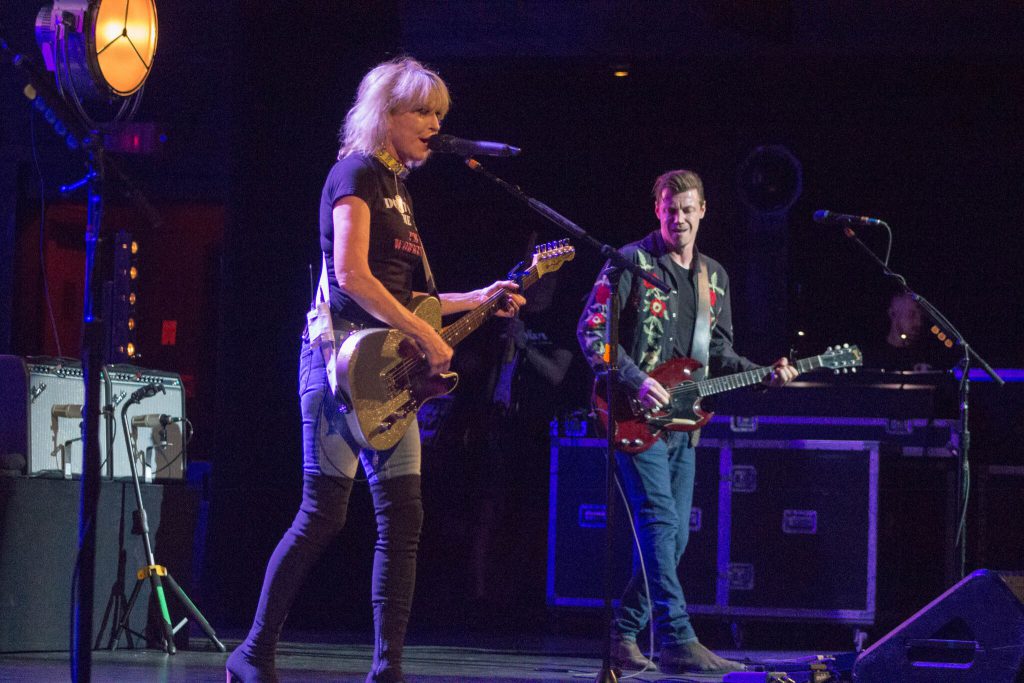 The Pretenders. Photo by Kellen Nordstrom.

Chrissie Hynde is a woman that makes me feel safe. She’s 66 and 5’8”, but she can still kick a whole lot of ass.

Hynde brought her legendary band The Pretenders to an ostensibly sold-out crowd at the Riverside on Tuesday night. She’s smart to surround herself with capable musicians including original drummer Martin Chambers and guitarist James Walbourn, who shred the hell out of every guitar he threw over his shoulder throughout the show. But make no mistake–Chrissie Hynde is The Pretenders. Hynde’s voice is as strong as ever, although she faltered on the opening of one song. She was clad in a T-shirt the read: “Don’t Pet Me, I’m Working.” This might have been a reference to honor service animals and there was a PETA booth in the Riverside lobby.

There was such demand for this show it had to be moved to the Riverside from the Pabst to accommodate the audience. The band thrust out such hits as “Kid”, “Back on the Chain Gang”, “Middle of the Road” and the heart wrenching “I’ll Stand by You.” Hynde is originally from Akron, Ohio, and makes her uniquely qualified to write “My City Was Gone,” in which she sarcastically croons, “Way to go, Ohio,” referencing how much of Akron was demolished in the name of progress.

When Hynde straps on her Stratocaster, you don’t think, “Oh, that’s a novelty, a female front man who can play guitar.” The Pretenders can hold their own with rockers like Tom Petty’s Heartbreakers, or Aerosmith. She commands the stage and you think, “Holy cow, she rocks.” Hynde and company aren’t the Bangles or Go-Go’s, not that there’s anything wrong with those bands. But The Pretenders are far more sophisticated and aren’t afraid to analyze the turmoils of life, though Hynde always handles this seriousness with a wink.

They say songs and smells can bring back memories. I vividly recall sitting on the terrace of the student union in Madison on Lake Mendota and hearing “Back on the Chain Gang” for the first time when it originally came out. I later learned she wrote it for her guitarist Jimmy Honeyman-Scott, who overdosed at just 25 years-of-age. I’ve never been able to listen to that song since without thinking of that awful story.

You know a band is hitting on all cylinders when they play new music–and nobody gets up to go to the bathroom. The audience was rocking from the first song, which wasn’t one of their well known hits. It was “Alone,” from the eponymous album said to have been recorded in just 10 days. Sure, the audience was a little older than, say, a 21 Pilots crowd, but no less enthusiastic — and far fewer cell phones were evident.

Hynde has plenty of attitude. When she sang “I Hate Myself,” a woman in one of the front rows beseeched her not to do that. Hynde  said, “Certainly there’s times you wake up in the morning, look in the mirror and say, who is that asshole.” Then ended with, “I really don’t hate myself. I think I’m fucking awesome.”

She worked the crowd with ease, dedicating an early song in the set to “the guy in the blue shirt.” Conversing with another member of the audience, she told her she could “come to my house and do anything she wanted.” Now that’s an invitation.

Veteran drummer, Martin Chambers, also got into the act, telling the audience “he gets confused sometimes,” while pounding out the introduction to “Back on the Chain Gang.”

You sit through a Pretenders concert and recall an earlier time when anything was possible. It wasn’t necessarily a “better” time, but it was your first–and you always remember your first.