Yerkes Observatory Will Be Closed

One world’s largest telescopes open to public, on Geneva Lake, will be sold by University of Chicago. 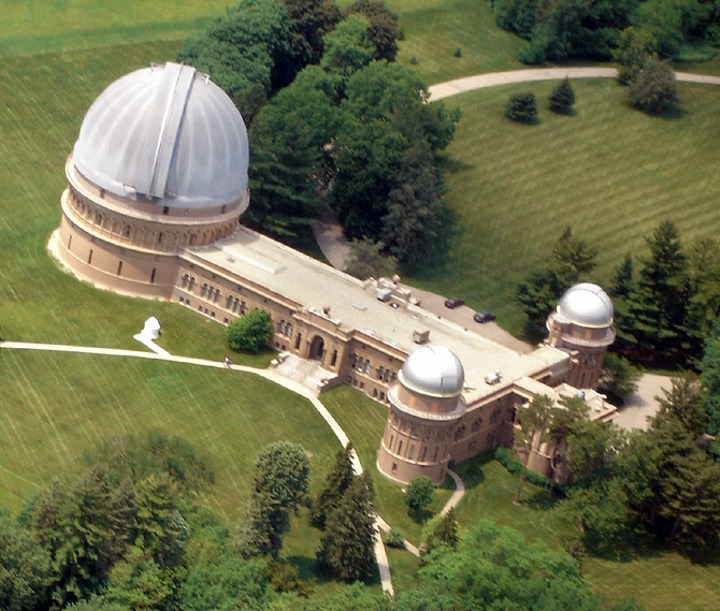 Yerkes Observatory. Photo is in the Public Domain.

It’s one of the largest telescopes in the world open to the public. But access to the night sky at Yerkes Observatory on Geneva Lake is slated to end Oct. 1, for now.

The University of Chicago announced in March it was closing Yerkes, a 19th century relic known as the birthplace of modern astrophysics.

Since then, the university has fielded proposals from prospective buyers interested in this Gilded Age landmark set on 77 bucolic acres in Williams Bay. Williams Bay Village President Bill Duncan said the university is keeping the village involved in the process.

“As I’ve visited with some of the university folks, I think there’s a real recognition of the historical value of Yerkes, and it’s partly in their DNA. I don’t think they just want to see it crumble,” Duncan said. “But they do have to move on, and reduce their operating costs there.”

University of Chicago Vice President for Civic Engagement and External Affairs Derek Douglas said the university is trying to strike a balance so that everyone walks away with something. He said residents of Williams Bay have stressed that they don’t want a high-density development to replace the observatory, such as condos or a hotel.

“They want to very much try to protect and preserve some of the elements of Yerkes, particularly some of the educational programs,” Douglas said.

The 40-inch telescope’s dome includes a movable floor, which allows the telescope to swing and point at various objects high or low in the sky. The university will continue to offer tours through the end of September.

Hundreds of village residents turned out to a town hall meeting in May, and the university collected dozens of comment cards on what to do with the ornate observatory, once home to Nobel laureates.

Williams Bay has about 2,600 residents. Duncan said it’s not feasible for the village to pass a $20 million referendum to purchase and maintain the observatory.

“We can’t expect the residents of Williams Bay to carry this. We may play a part, but it has to be other folks, other organizations,” Duncan said.

The University of Chicago plans to meet with the village board later this month to present options. The university’s activities at Yerkes will end Oct. 1 and Douglas said it’s not clear if a plan for new ownership will be in place before then.

“The goal and plan was always to try to have something resolved by Oct. 1. It wasn’t a guarantee. We knew that. The town knows that,” Douglas said. “I know there’s a lot of anxiousness in the town to have some sense of what’s going to happen by that date.”

The university created a “Yerkes Updates” website, where it posts about the process. The deadline for submitting an “expression of interest” was June 15, but the university said it reserves the right to consider offers on a rolling basis.

The university tried to close and sell the observatory once before in 2005, but it suspended those plans after strong opposition from local residents.

Listen to the WPR report here:

3 thoughts on “Yerkes Observatory Will Be Closed”